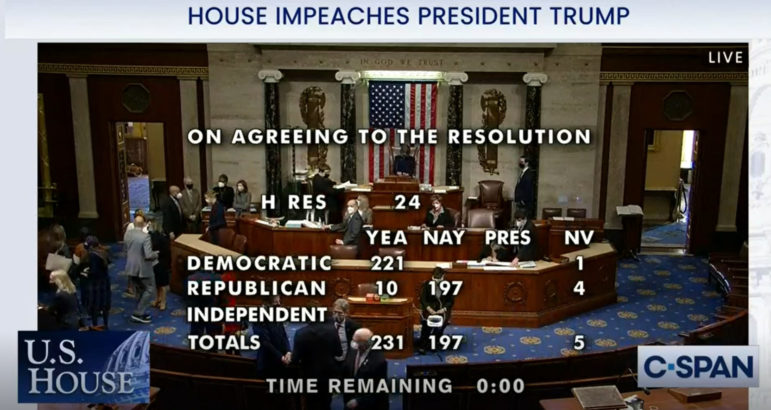 Four days after an armed mob of Donald Trump’s followers attempted a coup by storming the U.S. Capitol building, former New Jersey Gov. Chris Christie said on ABC “If inciting to insurrection isn’t [impeachable], then I don’t really know what is.”

I don’t generally agree with Christie, particularly when he was part of Trump’s inner circle. In this case, however, I do agree.  I can usually find humor in about any situation, or at least some way to soften the blows of the outrages of life.  Not this time.  People suffered injuries physical and mental, five died and the country nearly died with them.  Only the undermanned and out-gunned Capitol Police Force stood between Trump’s armed insurrectionists and the possible loss of our democracy.

Since the beginning of our country, the House of Representatives has launched 62 impeachment proceedings, the first in 1797.  Of that number, the House has voted to impeach 21 federal officers, including President Trump.  States and other jurisdictions have launched many others;  the list is far too long to include here.

Fifteen of the federal cases were of judges, 13 were district court judges, one court of appeals judge and one Supreme Court Associate Justice.  Civil War hero William Belknap was impeached in 1876 for graft and corruption, but resigned from his post as Secretary of War before his trial.

Four of were U.S. Presidents, only one was impeached twice, but none were removed from office.  Yet.

Fifth grade civics classes teach that impeachment is an accusation, and the accused are considered innocent unless proven guilty.  It’s a good system.  In impeachments, the leading charges have been financial corruption, including both tax evasion and failure to disclose finances.  Drunkenness and sexual abuse account for three and perjury was the basis for two of the impeachments.

History does have some lessons to teach, and as philosopher George Santayana famously wrote, “Those who do not remember the past are condemned to repeat it.”  Yet in our current case of President Trump, we have no historical example because no one else has ever been impeached for “incitement of insurrection” against the U.S. government and “lawless action at the Capitol.”

The first president accused but who evaded impeachment was President James Buchanan, accused of corruption.  The House created a committee of three Republicans and one Democrat to investigate.  Created largely to embarrass the beleaguered Democratic president, the committee was surprisingly successful at rooting out fearsome amounts of corruption, treason and incompetence in Buchanan’s administration.  However, the committee found that although Buchanan’s activities did not call for impeachment, his administration had been the most corrupt in U.S. history.

Thereafter several judges, and others were impeached for crimes such as drunkenness, corruption, bribery, tax evasion and so forth.  President Andrew Johnson was accused of a violation of the “Tenure of Office Act,” in 1868.  That law involved the restriction of removing officers responsible for implementing the restoration of the South after the war.  Passed by Congress over Johnson’s veto, it was found unconstitutional.  Johnson was acquitted by one vote in the Senate.

Supreme Court Associate Justice William O. Douglas was the subject of two inquiries, one for a brief stay of execution for Julius and Ethel Rosenberg, controversially convicted Soviet spies, in 1953; the other in 1970, when he failed to recuse himself from obscenity cases while having articles published in progressive magazines.

Then, of course, comes the case of President Richard Nixon, who escaped impeachment on charges of “obstruction of justice, abuse of power and contempt of Congress” by resigning.  He was later pardoned by President Gerald R. Ford, Nixon’s hand-picked successor.

William “Bill” Clinton was impeached in 1998 for “Perjury and obstruction of justice” having to do with the well-known sexual liaison.  He was acquitted on both counts in February 1999.

But for our purposes, and the impeachment at hand, it might be useful, or at least interesting, to consider the first impeachment. It was in 1797, when Tennessee Sen. William Blount conspired with Great Britain to capture of Spanish-held Louisiana.  He had been a North Carolina delegate to the Constitutional Congress and a paymaster in the Revolution.  He was also an aggressive land speculator whose risky land investments landed him in debt.  His 1790s foray with Great Britain was intended to increase the value of his own land holdings to the west.  The Senate refused to accept the impeachment, but expelled him on their own authority.

And now, we have the twice-impeached Donald J. Trump, another real estate promoter (famous mainly for six bankruptcies), who became President of the United States after failing to win the popular vote and gaining the votes of the Electoral College complaining even then that the election was “rigged.”  Once in office, he claimed a “landslide victory” and swore he’d be re-elected unless the next election was “rigged.”

He lost the 2020 popular vote, as he had four years before, but failed also in the Electoral College.  He claimed it was “rigged,” unsuccessfully challenged the result in at least 40 courts and was dismissed by the U.S. Supreme Court in a single-sentence opinion.  Then, on January 6, he sent his angry armed supporters to the nation’s Capitol to kill the elected representatives of the people who were counting the Electoral College votes.

As we mourn our losses of life, and the shreds of freedom this man and his mob have left in their wake, consider a little more from Santayana: “Fanaticism consists of redoubling your effort when you have forgotten your aim.”

Brian McGlynn is a journalist and essayist living in Mystic