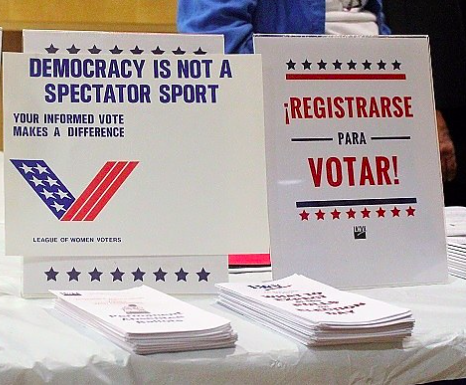 Complaining about a last minute issue between the Secretary of the State and local town clerks, Senate Republican leader Len Fasano charged in a letter to Secretary Denise Merrill that, “Your party has portrayed itself as the protector of people’s right to vote and blamed Republicans for trying to deny people that right. Nothing could be further from the truth.”

To the contrary, claims about Republican efforts to suppress the vote are fully supported by facts.

From the moment Secretary Merrill and Gov. Ned Lamont announced plans to expand access to absentee ballot voting for last week’s primary, the Connecticut GOP went on the offensive. It made unfounded claims about voter fraud (House Republican leader Themis Klarides asserted, without any evidence, that fraud is a “huge issue”), accused the governor of “eviscerating the constitution” and pursued litigation to block Secretary Merrill’s plan to mail absentee ballot applications to all eligible voters for the August primary.

From the outset, Sen. Fasano was on the record opposed to expanding absentee ballot access to all voters. He only approved of permitting “vulnerable populations and those with preexisting conditions to vote by absentee ballot.” Forcing the rest of us to choose between protecting our health and exercising our right to vote is essentially denying us that very right.

Sen. Fasano’s go-to strategy for serving as the “protector of people’s right to vote” is litigation. He stated that Gov. Lamont’s May 20 executive order permitting fear of COVID 19 to be a reason to vote by absentee ballot “begs for legal challenges.” Indeed, various Connecticut Republican candidates and legislators filed unsuccessful suits to block the executive order. Now Sen. Fasano is at it again, saying anyone who lost a primary race due to late-arriving absentee ballots probably has grounds to sue. How is that not denying people the right to vote?

Connecticut Republicans’ attempts to undermine voter confidence pale in comparison to President Trump’s efforts. Trump’s incessant tweets intended to sabotage the election reached dangerous new levels last week with his explicit declaration that his desire to block USPS funding is designed to hamper its ability to handle the expected surge of mail-in ballots. Yet the state’s GOP leaders have said nothing about the president’s relentless and baseless attacks on election integrity, expressly designed to deny people their right to vote. In comparison, Connecticut Attorney General William Tong, a Democrat, is working with other attorneys general on a “vigorous legal defense of our postal service and the legitimacy of our election” (just one example of why the Democratic Party has a reputation as a “protector of people’s right to vote.”)

Considering Sen. Fasano’s bold assertion that Republican efforts to deny people the right to vote could not be “further from the truth,” it’s important to set the record straight. Ironically, one of the few areas of candor for the president is his public expression of the motivation underlying Republican voter suppression efforts. In response to April’s Democratic coronavirus relief package that included substantial funding for election assistance, Trump remarked, “They had things, levels of voting that if you’d ever agreed to it, you’d never have a Republican elected in this country again.”

For decades, GOP electoral strategy has been grounded in suppressing the vote and manipulating election outcomes. Forty years ago Paul Weyrich, the influential conservative strategist who founded the Heritage Foundation told evangelical leaders, “As a matter of fact, our leverage in the elections quite candidly goes up as the voting populace goes down.”

In 1982, the Republican National Committee came under a court-ordered consent decree prohibiting it from engaging in voter-intimidation tactics aimed at communities of color—tactics designed to deprive Blacks of their right to vote. The decree was updated after further attempts at intimidation in 1987, and again in 1990. Despite more violations in 2004, federal courts let the decree expire in 2017. Freed from the decree, the RNC has plans to recruit up to 15,000 poll watchers in key states to challenge voters they deem suspicious, precisely the tactics that led to the original court order. True, intimidation is not really denying people their right to vote; it merely scares them from doing so.

The 5-4 conservative majority Supreme Court 2013 decision in Shelby County v. Holder gutted a key provision of the 1965 Voting Rights Act, the pre-clearance requirement for jurisdictions with a history of voter discrimination. That cleared the way for a flurry of laws enacted by Republican-controlled legislatures intended to reduce voter turnout, all in the name of preventing virtually non-existent voter fraud. One of the most egregious was North Carolina’s voter ID law, struck down by a federal appeals court for attempting to deny Blacks their right to vote with “almost surgical precision.” Yet another inconvenient truth for Sen. Fasano.

David Daley, in his book, Ratf**Ked-why Your Vote Doesn’t Count, laid out the GOP’s $30 million REDMAP strategy to flip state legislatures ahead of the 2010 census. That enabled them to gerrymander Congressional districts with such precision that they captured a 31 vote majority in the U.S. House despite receiving 1.4 million fewer votes than Democrats. Gerrymandering doesn’t deny people their right to vote, it just makes their votes worthless.

Republicans delivered a similar blow to voters in Connecticut with their near-unanimous opposition to the bill to join the National Popular Vote Compact that passed the CT General Assembly in 2018. By favoring winner-take-all Electoral College voting that lets a handful of battleground states decide who becomes president, Republicans effectively disenfranchised every Connecticut voter who casts a ballot for the Republican presidential candidate, since the state has been reliably blue for years.

Returning to the present day, the Trump campaign and the RNC are pouring millions of dollars into blocking Democratic attempts to make it easier to vote. The RNC fought all the way to the Supreme Court, but lost its suit to keep Rhode Island from removing witness requirements on its absentee ballots.

Indeed, the GOP is pursuing its legal strategy with “surgical precision.” Last week the Trump campaign and the RNC filed lawsuits in two Democratic-leaning Iowa counties that Trump lost by 40,000 votes in 2016, aimed at preventing election officials from easing the application process for absentee ballots. At issue: pre-populating the applications with the voter’s information to reduce rejection rates. The move could invalidate thousands of applications already returned. No lawsuit was filed in a third county that also pre-populated the applications. In that Republican-leaning county, Trump won in 2016 by 8,500 votes.

These are just a few of the inconvenient truths that validate Democratic claims about Republican voter suppression efforts. Elections have consequences, including whether you can cast a ballot, or whether it makes a difference to the outcome. When Americans vote this November, they won’t be voting just for a president, state and federal officials, they’ll be voting to protect their constitutional rights and our democracy.

Organization affiliation does not imply endorsement.