Interim CSCU president’s appointment is not about education 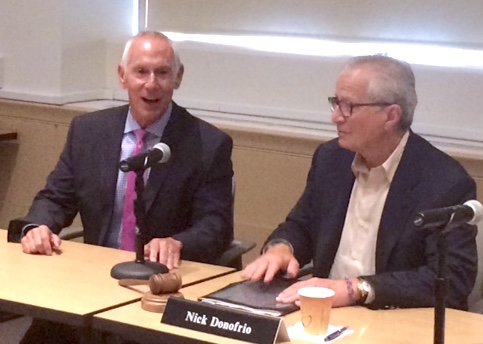 Mark Ojakian, left, and Nicholas M. Donofrio, chair of the governing board of the Connecticut State Colleges and Universities system, at the Aug. 21 meeting at which Ojakian, was named the system’s interim president.

My read of the tea leaves is that the appointment is based upon the primary strength of the appointee which is collective bargaining experience and budget and finance expertise.

I suspect as the collective bargaining agreements are up for re-negotiation in 2016, the interim president will seek significant concessions from faculty, staff and others. This is a critical negotiation to help Gov. Malloy, Ben Barnes and the legislature balance the state budget. In addition, the state budget is based upon various revenue projections that probably will not materialize that could result in a midyear budget reduction to the CSCU system and other government agencies. Hence, the contract negotiations are critical.

Now that the no-layoff policy has sunset, it is also reasonable to envision the president and board renewing efforts to reduce low enrolled academic programs resulting in faculty and staff layoffs; probably increase efforts for more online courses and degree programs also resulting in faculty layoffs; a consolidation of back office operations like purchasing and human resources resulting in staff layoffs; outsourcing services like maintenance and housing to save money; consider system-wide contracts for dining services and bookstore operations; increase efforts to eliminate tenure compensation but maintain academic freedom; a reduction in tenure track faculty and more reliance on contingent instructors; and a right sizing of the system office resulting in additional layoffs.

All of the above will be hidden under the higher education buzz word “efficiency.” The board will spin this as a means to make education more affordable for students.

At the time of the merger of the two systems, the governor’s press release in 2011 indicated “a sweeping plan to overhaul the state’s higher education governance and structure to provide more resources for classroom teaching and instruction to help increase the number of students receiving degrees, while at the same time, saving tax payers and students tens of millions of dollars over time.”

There has been no noticeable savings to date, but, the governor and legislature has decided to provide less public funds to the CSCU system resulting in fiscal instability. The promise to save taxpayers money might be one of the reasons why the 2015 legislature passed a bill to cap compensation at the system office.

The governor has all his preferred people in charge. All regents have been handpicked by the governor and approved by the legislature. The board chair is a major donor to the governor, the board has handpicked college presidents that align with their philosophy, and the governor’s chief of staff is now system president.

The governor owns the CSCU system. He is now accountable for the results. There are no obstacles to his pledge to save taxpayers and students tens of millions of dollars.

It has never been about quality education that prepares students for professional careers and preparing students to compete with other graduates around the world for the best careers, admission to the best graduate schools, and prepares graduates to evolve into new careers as the economy changes. The merger has always been about cost reduction which means less faculty, staff and others.

Truth of the matter is that following the previous president is an easy assignment. Mark Ojakian is well respected by the political community; he will communicate better, be more consistent and trustworthy, be responsive in a timely manner and provide evidence-based facts to support his case. He’ll exhibit a human side with listening skills that show compassion. Time will tell, but, I think you’ll get a sense of the president’s agenda rather quickly.