It’s time for Connecticut to break its bad budget habits

Connecticut’s elected leaders face difficult decisions as they attempt to balance the budget responsibly while providing for the state’s future. As recent decisions by the legislature’s budget committees show, it is not easy to meet the demands of Connecticut’s many human needs while limiting the burden on taxpayers, but solutions do exist and there is evidence they have worked in other states.

The Connecticut Institute for the 21st Century (CT21.org), has produced a series of six reports outlining a “Framework for Connecticut’s Fiscal Future.” The recommendations contained in this series of reports can serve as a solid starting point for state elected officials looking for a means to reduce the cost of state government while maintaining essential services.

If implemented, the proposals would have positive short and long term effects on the state budget and help end the annual cycle of what some have described as a crisis management approach.

The biggest part of Connecticut’s budget is in the area defined as social services. This is where government delivers on its most essential promise to care for those who cannot care for themselves. This is also where fundamental changes in policy can result in substantial cost savings. 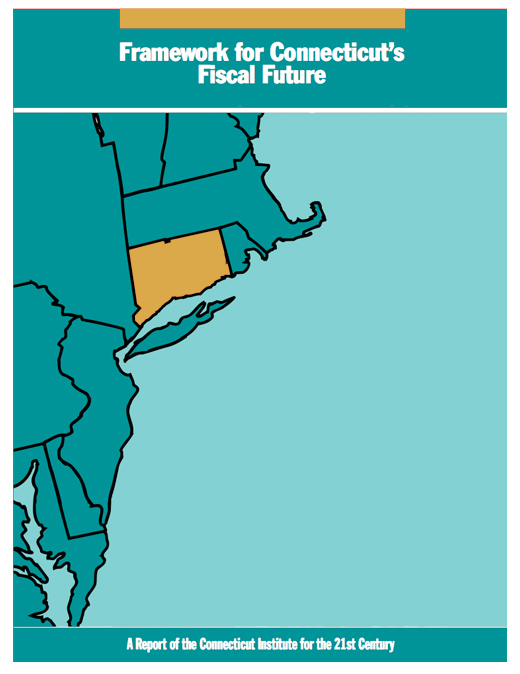 The cover of the CT21 six-part study. Click to see individual reports.

If Connecticut changed its approach to providing services for people in need of long term care, we could save as much as $900 million per year by 2025. This would mean allowing many long-term patients to stay at home where they prefer to be. Similarly, there is a substantial network of private care providers in Connecticut ready to help the state reduce its costs by millions when it comes to providing care and treatment for people with mental illness, physical and developmental disabilities and addiction.

Gov. Dannel Malloy was right this year to propose changes in our system of correction, parole and probation. His proposal for what he called “A Second Chance Society,” is right from a policy perspective and fiscally responsible. By reducing Connecticut’s prison population by 50 percent over the next five years, we can reduce costs by nearly $250 million a year.

The use of information technology has evolved rapidly over the last two decades. Government has not always kept pace. The use of cloud technologies could dramatically reduce personnel and operating costs associated with the state’s computer systems. New technology also now makes it possible for Connecticut to move away from an information technology system built and run by government, in favor of one that relies on private contractors.

Fiscal reality is forcing many local governments to enter into cost sharing arrangements. Connecticut state government should do all it can to encourage this trend. State funding is a major source of revenue for cities and towns in our state. Reducing their costs will reduce the level of state support necessary for local budgets.

These proposals are real and the results are achievable. We urge the governor and the legislature to use the remaining time in this year’s legislative session to directly address the long term fiscal health of our state by enacting at least some of these ideas.

The final proposals approved by the legislature’s budget committees last month illustrate the need for state leaders to adopt a new approach. No one sees the committee recommendations as sound policy in its final form.

It is clear continuing on the path we have taken with previous budgets simply makes the problem more difficult in subsequent years. This is our opportunity to break our bad habits by modernizing our approach to government spending.

Jim Torgerson is president and CEO of UIL Holdings Corporation and chair of the Steering Committee of the Connecticut Institute for the 21st Century.