Justice Ginsburg is probably quite ill 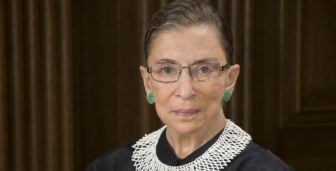 First of all, I wish Justice Ruth Bader Ginsburg well. She is a courageous advocate for women’s rights and a cultural icon. But in one reads between the lines of published reports on her situation, this woman is probably quite ill.

According to Kathleen Arberg, public information officer for the Supreme Court: “Two nodules in the lower lobe of her left lung were discovered incidentally during tests performed at George Washington University Hospital to diagnose and treat rib fractures sustained in a fall on November 7. [2018]”

According to the surgeon who operated on the justice, Dr. Valerie Rusch, both nodules removed during surgery were found to be malignant. However, “post-surgery, there was no evidence of any remaining disease. Scans performed before surgery indicated no evidence of disease elsewhere in the body. Currently, no further treatment is planned.”

Thus, from published reports from reputable sources, we know the following:

1. She had non-metastatic colon cancer removed in 1999.
2. She had non-metastatic pancreatic cancer removed in 2010.
3. She had a stent placed in her coronary arteries in 2014.
4. She fell in November of 2018 and broke three ribs.
5. She had surgery in December of 2018 and had two malignant nodules removed from her lungs.
6. Scans found no other cancer in her body.
7. She is 85 years old and has no history of being a smoker.

The most significant words from above are “two malignant nodules.” What does this mean?

First of all, malignant nodules are fancy words for small tumors, in general one that is about an inch or smaller in size. When a nodule is removed during surgery, it is quickly examined under the microscope by a pathologist. These doctors rarely see patients; rather they examine tissues and determine the cause of disease. Pathologists can usually determine quickly whether a nodule is benign or malignant, but in order to determine the actually type of cancer (that is the tissue source of the cancer), special preparation is required before microscopic examination. This can take several days or weeks to complete.  At the time of this writing, we have no published reports stating the results of these tests – or even if they were ever done.

But since there were “two malignant nodules,” the odds are that this is Stage IV or metastatic cancer – meaning that it has spread to the lungs from another organ system. Even with today’s modern technology, it is difficult to pinpoint small primary tumors. Otherwise we would be screening everyone to catch cancer earlier when it is easier to cure.

As noted above, Justice Ginsburg had colon cancer and pancreatic cancer in the past. Again, it is unlikely that these cancers are the source of her possible lung metastases. These cancers do not lie dormant for years. What is much more likely is that a small primary cancer exists – either a new one in the colon or pancreas, or another from another organ such as the liver, kidney or breast. If this is the case, her prognosis is poor, as summarized in the chart below.

This chart is not as complicated as it looks. For example, if 100 patients are diagnosed with metastatic colon cancer (meaning the cancer is not only in the colon but in another organ), 50 of those patients will still be alive and 50 will not be alive two years later. By five years, 12 will be alive and 88 will not. Keep in mind that these numbers vary according to various academic studies and oncologists (cancer doctors) may quibble as to their exact accuracy. Also keep in mind that there are other types of metastatic cancer that are not listed here. These are simply the more common ones.

However, there another more optimistic possibility: that the tumors removed are primary lung tumors. This is obviously what her doctors hoped for, or else they would not have subjected this frail-appearing 85-year-old woman to this brutal surgery. But it is unusual for there to be two primary tumors in the lungs at once – especially in a non-smoker.  But if these are primary tumors and they have been completely excised, her prognosis could be excellent, up to a 92 percent five-year survival.

But if this were the case, there should have been published reports stating that the pathology reports showed this to be a type of primary lung cancer. At the time of this writing, this has not occurred. Furthermore Justice Ginsburg appears to be so incapacitated that she cannot attend oral arguments at the Supreme Court. But this could be because she needs more time to recover from her surgery, not because she has cancer.

It is a shame that political junkies of all persuasions have been quite ghoulish in analyzing Justice Ginsburg’s prognosis, but this is what happens when our judiciary makes laws rather than interprets them. Supreme Court picks are now more important than elections in determining public policy, as can be seen by the blood sport that characterized Justice Brett Kavanaugh’s recent confirmation hearings.

But in my medical opinion, the doctors and the media who have commented on her health are underestimating the severity of her illness. Here is the bottom line: President Trump has a reasonable chance – at least 35 percent – of replacing Justice Ginsburg if he finishes his term. If he wins reelection and survives four years, his chance of replacing her is at least 80 percent.

But as the Italians say at wedding anniversaries: “Cent anni.” (“May you live 100 hundred years.”)  That is my wish for Justice Ginsburg.

I would like to thank my friend and colleague Dr. Mehdi Saeedi for his invaluable comments in helping me write this article.