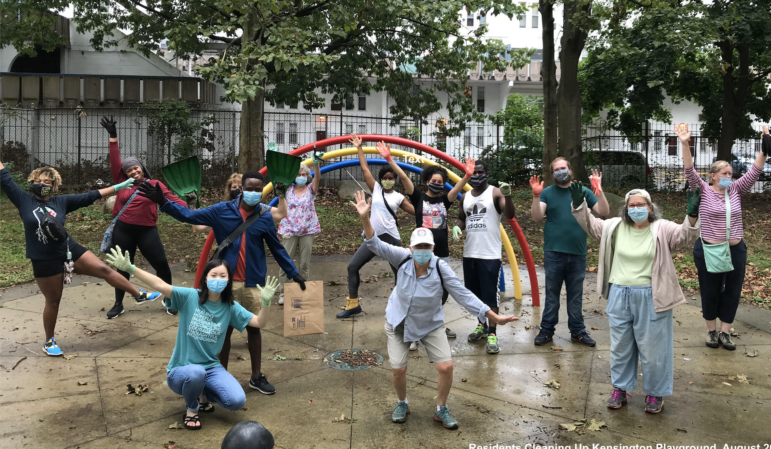 Friends of Kensington Playground (FOKP) – a group mainly of Dwight residents most of whom live close to Kensington Playground (KP) and have been active in New Haven’s Dwight community efforts for decades – agree with Delisa Tolson that the playground was once neglected and dangerous, unsafe for children and families. However, several years ago Captain Healy set Kensington Playground as his top priority when he became the New Haven Police Department’s Dwight district manager and began the park’s transformation.

Crime is now gone from the park. We see children playing baseball, tag football, using the (still non-functioning) splash pad as monkey bars, playing with their squirt guns, roller skating, and riding their bikes and scooters around the park.  Children regularly ask us if we can fix the splash pad, and others have asked if we could level the grassy field where they play tag football and soccer. Dwight residents used the park for worship every Sunday during Covid, and there have been barbeques and cookouts throughout the summer —including more than 50 adults and children attending a repast in July.

The Friends of Kensington Playground was formed in August, 2020 to raise awareness of the sale of our park. Many neighbors did not know the park was for sale until we knocked on their doors. There was only one public hearing on the sale  and no community outreach by the city. (We have posted a timeline in the playground and on our website of key decisions.) We set up a laptop computer in Kensington Playground, so residents could testify at one Board of Alders hearing. Some 350 New Haven residents have signed our petition to save Kensington Playground, 70 of whom live within two blocks of the park.  Lack of community notification and input, disregard of public testimony and due process are why we sued the city. We are committed to saving and improving our only public playground.

Dwight is a low-income inner-city community, densely populated, where most people rent their homes.  Few Dwight residents have a backyard to relax or play in.  The playground plays an important role as one of the largest contiguous greenspaces in Dwight, in addition to its social role. Specifically, it currently provides carbon sequestration, pollution reduction, runoff control, and temperature modulation to the community surrounding it. The park acts as an important environmental asset that this community desperately needs in the face of continued development, climate change, and the impacts of institutional segregation and environmental injustice.

We understand the appeal of playground to The Community Builders (TCB) as a site for new housing: its 5-lot parcel is adjacent to many of its other properties and could contain a 15-unit building (providing a net gain of only seven units as eight older units would become office space). The builder has added enticements to neighbors for support of its project by promising as part of the deal renovations to Ms. Tolson’s daycare center and to its current apartments long in need of repairs, along with improvements to Garden and Day Street Parks nearby. Garden Street Park is privately owned by TCB, which has left it a wasteland for ages, wedged between two parking lots.  An improvement to the space is long overdue. Day St is owned by the City of New Haven and sits on Chapel St, one of the city’s busiest thoroughfares.  It’s a good place for teens and adults to relax, use the basketball courts and wait for the bus, but is no replacement for the quiet shade of Kensington Playground. TCB has made its current residents beholden to a plan that suits the company’s needs but not the neighborhood’s.

FOKP absolutely supports affordable housing: on sites that are more appropriate for the health and well-being of the neighborhood, where construction of desperately needed affordable housing could replace a blighted building or an empty lot to great benefit, rather than on an irreplaceable greenspace. We continue to research and list other options on our website, www.kensingtonplayground.org.

This deal was initially rejected three times by the Parks Commission, which reluctantly bowed under political pressure. FOKP is proposing to all Community Management Teams (CMTs) that every neighborhood must have at least one well-equipped playground, receiving approval from all attended so far. If the city would support KP’s existence just as it has for Edgewood, Scantlebury, Goffe St, Lenzi and other parks, a real renaissance is possible for KP and its neighborhood. Let’s not be short sighted; let’s keep this park for future generations. And let’s build even more affordable housing units elsewhere, in Dwight and around the city.

Jane Comins, Susan Klein and Renee Vaughn write on behalf of the Friends of Kensington Playground.