Lamont should ban Tom Brady from moving to Connecticut 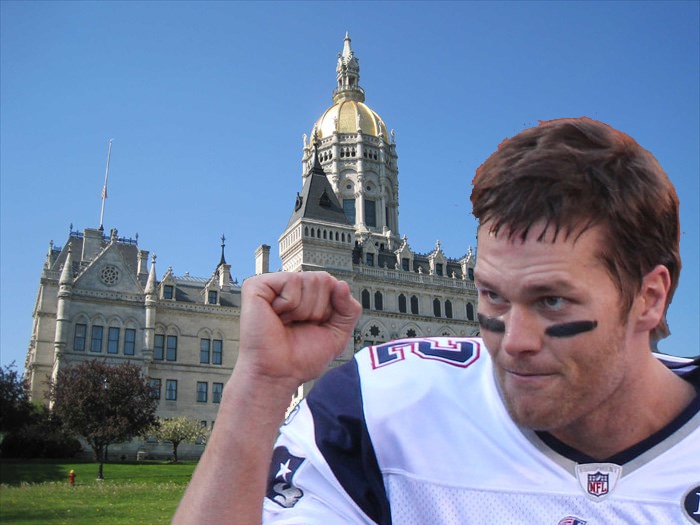 According to published reports, Patriots’ quarterback Tom Brady is considering moving to Greenwich. If Gov. Ned Lamont really wants to see his popularity sky rocket, he should propose legislation to prevent such an outrage.

But before such legislation is proposed, education is crucial. The good people of Connecticut must understand that if Tom Brady is your neighbor, he will insist that a SWAT team be called if your dog does its business on his front lawn.

But the real problem will arise when Brady joins Ned at the Greenwich Country Club. The magnanimous Brady will bribe his way to admittance by donating durable steel pins. As the golf rules have recently changed, there is no longer any requirement to remove the pin when putting. Brady will argue that using these pins will enable the club to save money, as the pins will not have to be replaced as often when the ball hits them.

Then the club will have its annual Member-Guest tournament and be honored when Brady’s guest, Bill Belichick, graces the club with his august presence. Members will fawn over him as he graciously signs autographs, poses for pictures and buys drinks.

As there is a huge variation in golfers’ abilities, the game is equalized by what is called a handicap. A golfer’s scores are averaged and this number is subtracted from 72 (or whatever is par for the course) and put into a formula that calculates the best score a golfer will shoot 16% of the time. For example, a golfer who averages a score of 95 will shoot at 89 or better 16% of the time. Thus this golfer’s handicap will be 17 on a par 72 course, 89 – 72.

These handicaps are used to see who wins the “net score” for the Member-Guest Tournament so that inferior teams have a chance of competing. There is also a winner for gross score so that the superior golfers don’t feel slighted. Thus, in what Belichick and Brady will later claim to be a “rounding error,” Belichick will submit a handicap of 22 and Brady a 15.

Then the tournament will begin.  Suspicions will arise almost immediately when Brady drives 380-yard holes. There will be muttered accusations of “inflated golf balls.” Further problems will arise when Belichick’s wayward putts turn at bizarre right angles and find themselves into the hole. “Are those balls magnetized? Is that why Brady donated the steel pins?”

The members will have an after-tournament dinner and the awards will be presented. Fenton Willoughby, the winner of the longest drive contest for the past eight years, will be annoyed when his 310-yard drive is eclipsed by Brady’s 405-yard drive.  Governor Lamont, who sank a gorgeous curling 35-foot putt, will be nonplussed that he finished a distant second to Belichick’s 75-foot putt in the longest-putt contest.

But more problems will arise when Brady and Belichick post a gross score of 62. Club member Kingman Percival, a retired actuary, will later calculate that the chance of this happening with Brady and Belichick’s reported handicaps to be 1 in 12.4 billion.  But then when their handicaps are considered for the net, their score will drop to 42. Even North Korean President Kim Jong-un, whose father reportedly shot a 34-below-par 38, will tweet his suspicions. There will be no close seconds and poor Governor Lamont will have to force a smile, as he presents both Brady and Belichick with their prizes, a box of Pro V1 golf balls for each.

But by keeping Brady out of Connecticut, Governor Lamont cannot not only prevent such ignominy; but have his popularity soar to 70%, as Jets and Giants fans flock to him. But the crucial factor will be when another group becomes his fanatical supporters – Steeler fans.  We Steeler fans – a significant 8% of the population – will now agree to any policy Lamont suggests. Toll gantries every half mile? No problemo. Jacking up the state income tax to 10%. Are you sure that’s enough? Educrats retiring at age 55 with $225,000 annual pensions? They earned it.

And when Governor Lamont runs for reelection, he will not have to touch his nine-figure fortune as we Steeler fans will gladly finance his campaign, even if we have to hock our wives’ jewelry because our housing values are underwater because of his aforementioned policies. And we will proudly display Governor Lamont’s portrait on our living room walls between those of Franco Harris and Jack Lambert.  Governor Lamont will be able to fix our roads, fund all the pensions and enter the pantheon as Connecticut’s greatest governor.

All he has to do is keep Tom Brady out of Connecticut.