Learning from Superstorm Sandy: 10 questions for the experts

By the time Superstorm Sandy slammed into the Connecticut coast on Oct. 29, 2012, its winds had weakened to just below the hurricane force speeds that had already torn through New Jersey and New York. But it still brought flooding rains and storm surge that coincided with high tide and gusts strong enough to topple trees and knock out power both on the coast and inland.

As the five-year anniversary of Sandy approaches near the end of what has seemed like a relentless hurricane season, no one should become complacent. Connecticut escaped the punishing onslaught of Harvey, Irma, Jose and Maria this year, but that luck won’t hold out forever.

Has the experience of Sandy left the state in better shape to deal with hurricanes and superstorms to come?

Five experts shared their insights: Juliana Barrett, associate extension educator at Connecticut Sea Grant; Brian Thompson, director of land and water resources for the state Department of Energy and Environmental Protection; Jennifer Marlon, research scientist at the Yale University School of Forestry and Environmental Studies and affiliate with the Yale Program on Climate Change Communications; Scott DeVico, public information officer for the state Department of Emergency Services and Public Protection; and James O’Donnell, executive director of the Connecticut Institute for Resilience and Climate Adaptation (CIRCA) and professor of marine sciences at the University of Connecticut.

The answers here were synthesized from their responses.

What are the most important lessons for Connecticut from Superstorm Sandy?

Sandy wasn’t even a hurricane when it arrived in Connecticut, but it still revealed how many areas of the state are vulnerable to flooding and storm surge. It also exposed problems with the timeliness of utility crews’ ability to restore power that needed to be addressed. It raised awareness about the importance of preparation, and of the need for all residents to be able to answer this question ahead of another severe storm: If you had to evacuate, where would you go and what would you bring? Sandy also led to the realization of the need for emergency managers to better understand how to communicate effectively with the public about storm threats, who should deliver the message, and what information people already have in their minds that affects their decision to act when told to evacuate.

How have we acted on those lessons?

The Coastal Storm Awareness Program and a U.S. Department of Agriculture-funded project were created to educate people about everything from food safety after power outages to making sure people know where to go if they have to evacuate. Emergency managers now have access to better maps from the National Weather Service that show which areas are likely to flood during a storm. Many homes have been elevated along the shoreline to reduce flood risk. The response time of utility crews to power outages has improved, resulting from the enactment of Make Safe Protocols.

Communities are also more aware of the value of healthy, functioning beach dunes and wetlands to absorb floodwaters and wave action and soften the impact of storms, and have or are planning restoration projects. In one example, New Haven restored two eroded tidal areas into “living shoreline” natural systems rather than hardening them with seawalls, both protecting nearby neighborhoods and maintaining natural habitats in the process. But there is also a recognition that there is no “one size fits all,” because the state has a complex shoreline of beaches, rocky headlands and tidal wetlands, each requiring a different strategy.

Which communities saw the most extensive damage from Superstorm Sandy and what types of damage occurred?

Hundreds of homes in shoreline areas of Milford, Stratford, Fairfield, Branford and East Haven incurred structural damage and up to two feet of flooding. There was also street flooding, undermining of sea walls and breaching and erosion of beach dunes. 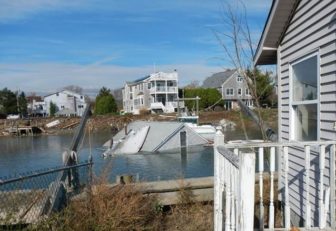 While the main effects of Superstorm Sandy were on the shoreline, what were some of the effects inland?

What are the lessons of Sandy specific to inland areas, and how are they being addressed?

The storm exposed the vulnerability of the power grid. This in turn led to new efforts to strengthen it with microgrids, tree-trimming projects and other efforts. Towns also became aware that intense storms can also cause riverine flooding, and have begun taking steps to reduce the flood risk. In one example in Mystic on Whitford Brook – several miles from that town’s shoreline — the Hyde Pond Dam has been removed to lessen chances of a repeat of flooding that occurred after recent storms and to restore the natural floodplain.

What is the value of the economic assistance received by the state after Sandy?

A total of $85 million in public infrastructure projects resulting from Sandy have been identified, about half of which have been completed thus far. The Federal Emergency Management Agency is funding $64 million of that, with the remainder of the cost borne by the state and towns. FEMA has also given out $15 million in assistance to individuals for home repair projects.

The Small Business Administration has distributed $52 million in loans to help cover business losses and repairs. The total effects on businesses in the state has not been quantified, but is estimated at billions of dollars in lost productivity, temporary shutdowns and employees not being paid.

Describe some specific projects completed in response to Sandy.

Berms have been built around the power distribution center in Bridgeport and several sewage treatment plans elsewhere in the state to protect them from storm surge flooding. A project to measure the size and force of the waves generated by Sandy was completed, to provide data that can be used to design structures better able to withstand future storms. Ten social science research projects focused on improving the communication of storm warnings were completed with support from the Connecticut, New York and New Jersey Sea Grant programs.

A coastal landscaping guide was created to help landowners use native salt-tolerant plants to protect their shoreline properties. DEEP permitting for rebuilding roads and structures damaged by storms has been streamlined. Connecticut Sea Grant and partners began a “living shorelines” initiative to educate municipalities and coastal property owners about using this approach to enhancing resiliency as an alternative to seawalls and jetties. 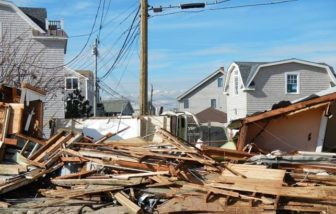 Mapping of evacuation zones has begun in some communities seeking to educate residents about whether they live in an evacuation zone and evacuation routes. In 2015, the state’s emergency management program for the first time was awarded national accreditation, recognizing how the state and municipalities are effectively working together.

Yes. Of course each storm is different, and will have different effects. But as we’ve seen this hurricane season with Harvey, Irma and Maria, it only takes one storm to have a devastating impact on a community. We need to be prepared at the state and municipal level and as individuals, families and businesses.

What are the projections for sea level rise in Connecticut?

What are the state’s most significant vulnerabilities that remain unaddressed?

More coastal homes should be elevated. While some towns are working on preparedness and reducing vulnerability, other towns have not begun. Some of these are low income communities with the most vulnerable populations. While coordination between towns and the state has improved, more is needed in planning and response efforts. Several projects to reduce flood risk by raising roads and erecting berms around critical infrastructure have been identified, but lack the necessary funding.

Judy Benson is the communications coordinator for Connecticut Sea Grant, a partnership of the University of Connecticut and the National Oceanic and Atmospheric Administration. She is the former health and environment reporter for The Day of New London.