Lessons learned: Education is not enough to combat anti-vaccine propaganda 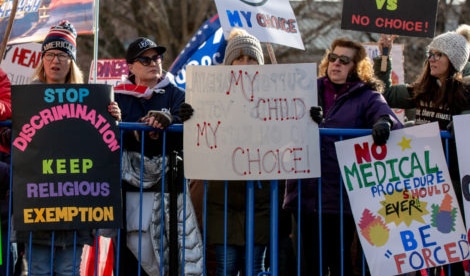 Anti-vax protestors outside the State Capitol.

Opponents argue Connecticut should pursue education to voluntarily increase vaccination rates.  We support education, but not as a substitution for school vaccine requirements.  Connecticut has already pursued education to no avail. In truth, even the most aggressive education campaign is no match for the anti-vaccination propaganda playbook machine.

The lengthy debate in the House referenced the 2018-19 measles outbreaks in Brooklyn and Rockland County, New York.  Importantly, these neighborhoods had been previously targeted by anti-vaccine misinformation. And even though there were valiant efforts to educate the public about vaccines, some famously led by Blima Marcus, an oncology nurse, these efforts were not enough to prevent the historic outbreak. Given the strong, entrenched, and well-funded anti-vaccination movement in Connecticut, such efforts won’t be enough in our state either.

However, you shouldn’t just take our word regarding how ineffective education alone would be to counter anti-vaccination sentiment.  You just need to listen to Connecticut’s anti-vaccination population. At the Public Health Committee hearing in February 2021, legislators asked those giving testimony about whether they would be receptive to receiving education about vaccines. Time and time again, the legislators were told no.

We’ve also seen this sentiment boldly expressed in private, anti-vaccination Facebook pages. In those Facebook pages, anti-vaccination members make a mockery of any future education efforts. In response to needing to take an online education course to maintain a child’s religious exemption, one person wrote, “I would take some expletive education to be able to stay in my state [Connecticut] and continue to make educated decisions for my children while allowing them to stay in school!”  Another person wrote, “It’s like they are trying to use this time to educate all us ‘uneducated’ people who don’t want to get vaccinated. This has come up several times already.”

Both posts are correct: education efforts in Connecticut have been tried and have failed.  Pediatricians counsel families every day on vaccines.  Parents are provided written information about vaccines including their side effects and the diseases they prevent. When parents decide to go against the professional recommendation, the American Academy of Pediatrics provides forms for parents and providers to sign documenting they have discussed vaccines’ risks and benefits.  Physicians routinely revisit this discussion with parents often to no avail.  The current bill actually expands opportunities for these physician-patient interactions. And while we strongly support expanding access, we also know that despite years of physician-patient conversation and education our non-medical exemption rates in Connecticut continue to trend upward.

Anti-vaccine individuals dismiss and disrupt education efforts. Public forums to discuss vaccines and answer parents’ questions have been overrun by anti-vaxxers.  One of us (Dr. Terranova) participated in one such event in Westport in 2019 as a physician.  Parents with questions were afraid to ask them in front of the hostile crowd.  Due to anti-vaxxers’ behavior, police had to escort panel members out.

Just this month, a measles case was reported in Connecticut.  An unvaccinated child traveled internationally, contracted measles, and returned to Connecticut.  The circumstances are unknown – specifically if the child was vaccine eligible or not, but as Connecticut’s Department of Public Health released information, anti-vaxxers responded on Facebook with disbelief (“I think it’s made up), by spreading conspiracy theories (“I would bet it’s planted”), and downplaying the severity of measles (“Where can I sign up to get my kids to catch it.”).

The outright dismissal of facts, science, and modern medicine defines the anti-vaccination movement, and we need far more than education programs to counter their messaging. The Center for Countering Digital Hate, shows there is a strong conversion element to the anti-vaccine movement.  Online anti-vaccine communities have grown by more than 10 million (or about 25%) since 2019.

Connecticut needs to protect itself – especially its school children – from the anti-vaccination movement. Other states such as Arkansas, Oregon, and Washington have required educational modules for parents choosing to not vaccinate their children without long-term success. Alternatively, California did see vaccination rates rise after they removed the religious exemption.  Let’s heed what the anti-vaccination movement tells, learn our lesson, and do what works: remove the religious exemption and follow-up with robust education.

Finding blessing in Ramadan as a non-Muslim

We all play a role in addressing CT’s housing crisis