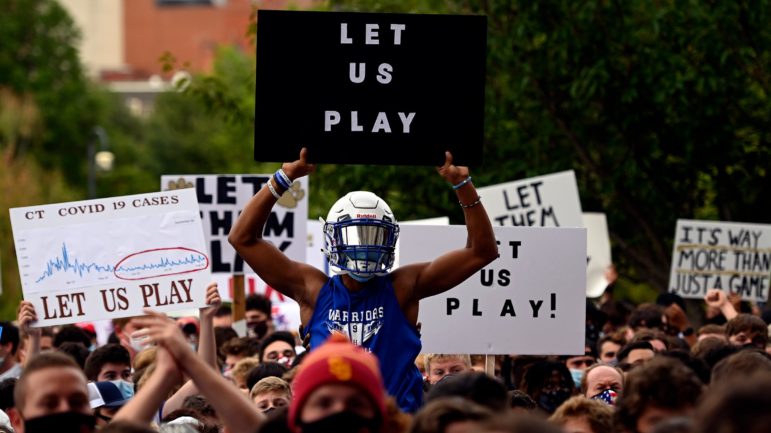 Players, parents, and coaches show they want to play during a demonstration at the State Capitol.

Our state has a bad habit of picking winners and losers. We see this in the state house where special interests are catered to over everyday residents who pay the state’s bills. Then business owners felt it while the state began to contend with COVID-19 when our governor made arbitrary decisions about opening dates with little communication or explanation. Now, it is our high school athletes who are feeling it.

Only high school football players have been targeted, apparently. Other age groups are permitted to play, and so are other “lower risk” sports, though in practice there does not seem to be much evidence to support these policies. In fact, other states with higher rates of COVID-19 infection have already begun to play football again without noticing any spikes in infection rate.

Connecticut has chosen another set of losers, and those are our high school football players, many of whom are hoping to receive scholarships or want to finish off their senior year and final sports seasons with their friends. All they want is what other athletes in this state have: a fair shake.

But they may not get that chance. Too many legislators in Connecticut’s supermajority seem unwilling to do what is necessary, whether they are unable to make meaningful fiscal reform or allow full teams of football players to get on the field this fall. In fact, they do not even seem willing to do their jobs, since they have abdicated their legislative power to Gov. Ned Lamont’s emergency powers until February with no protest whatsoever.

Is Connecticut incapable of governing itself democratically? Hartford attacks our town government by threatening to forcefully regionalize our schools or appropriate our towns’ local planning and zoning authority. Now, Hartford bureaucrats will determine which athletes play, at what age, and when – all without justification or evidence. I believe we need to Let Them Play!

Are we tired of being governed by legislators and bureaucrats who do not advocate for our interests, and who are not concerned with fairness? How is it that the Democratic Party is so against democracy functioning at the town level? When they do not like how towns decide to govern themselves, they use the outsized power they have in Hartford to dictate to those towns and force them into compliance. When they do not agree with normal choices parents make regarding their children, they supersede those decisions.

I have had enough, and that is why I decided to run this year for State Senate in the 26th District. I want to better our state by actually making the difficult decisions that other legislators cannot or will not make. I will empower our towns, not take from them. I hope to have the support of those of you who feel as I do that this state must do better.

Kim Healy of Wilton is a candidate for State Senate 26th District.