Love notes from commuters — NOT 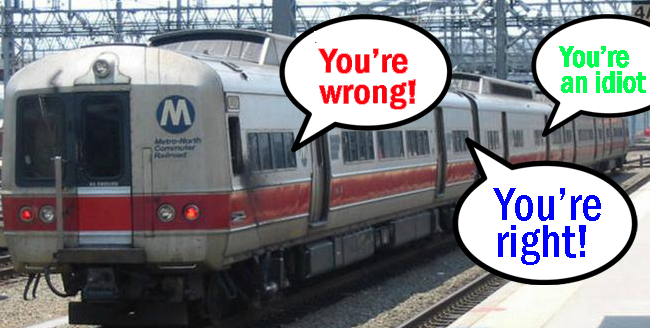 As I hope you can tell, I love writing this column.  As New York Times columnist Thom Friedman once said, a commentator should be both in the heating business and the lighting business… getting people fired up while providing factual support for his arguments.

Well, the “heat” runs both ways, as the comments I receive each week constantly remind me. For reasons best known to my bosses at Hearst, anonymous comments are allowed to be posted on the website version of my column.    Here are a few recent love notes from your fellow readers:

When I wrote recently about the power failures on Metro-North, cantchangestupid wrote:  “I sure hope a thorough investigation gets done on why those transformers failed. I see sabotage as the democratic conclusion.”  Gee.  And I thought I was cynical.

Or how about this gem from StaggerLee:  “Am I the only one who thinks Jim Cameron is a Useful Id-yot put out there to enable the spendthrift DemocRATs doing their best to drive the state’s economy into the ground?”  You’re not alone StaggerLee.  Your colorfully named (yet anonymous) friends say that a lot, though it is not true.

On the recently approved “lock box” on the Special Transportation Fund, NotMyProblem opined:  “The current Gov already figured out how to get around the lockbox by simply diverting funds before they made it into the lockbox.” That’s true, as I pointed out in a recent column.

On Twitter rpm4Liberty noted that Metro-North fares, though the highest of any commuter railroad in the U.S., don’t cover the operating costs but require a state subsidy.  He noted: “My truck starts every morning when I want it to, and I don’t need roads.”  Wow… a flying truck?

And Grizzly Beer Bear adds: “So is it wrong (to ask) the people who use this 18th century form of transportation to pay for it?  For that money you could BUY A CAR and not steal money from people who will NEVER use the rail service.” Obviously Mr Bear enjoys driving in bumper to bumper traffic and wants to add to it by pricing rail riders off trains and back into their cars.

For April Fools’ Day I tweeted a picture of a railroad dome car, soon to be added to Metro-North service, noting that the ride may not be fast but it sure would be scenic.  A few followers thought the news was true, but one guy who got the joke commented “When the train derails from lack of PTC you’re already halfway outside!”

Much of the email I get is commuters just asking for help:  where to complain about late trains, how to report uncollected tickets on a crowded train or asking about the lack of station parking.  I’m always glad to direct people where to get answers.

Having been at this commuter advocacy mission for awhile, I occasionally even get a note of thanks.  Christian N recently emailed me that his commute never seems to improve, adding “I am losing all hope. But thanks for your advocacy. You deserve to go to heaven.”

That final train ride, I answered, would probably be on a local train, running late, but oh so scenic.

Keep your letters and Tweets coming my way: CommuterActionGroup@gmail.com and @CTRailcommuters.