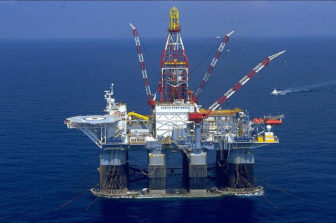 Washington – The Trump administration on Thursday proposed opening most of the nation’s offshore areas to oil and gas drilling, including areas in the North Atlantic off the New England coast that have been off limits to exploration for decades.

Interior Secretary Ryan Zinke proposed a five-year plan that would offer private companies 47 leases off the nation’s coastlines between 2019 and 2024. The plan proposes 19 sales off the coast of Alaska, seven in the Pacific, 12 in the Gulf of Mexico, and nine in the Atlantic, including two in the North Atlantic. It would be the largest offshore lease proposal ever made by the federal government.

“Responsibly developing our energy resources on the Outer Continental Shelf in a safe and well-regulated way is important to our economy and energy security, and it provides billions of dollars to fund the conservation of our coastlines, public lands and parks,” Zinke said in a statement.

“Today’s announcement lays out the options that are on the table and starts a lengthy and robust public comment period,” Zinke said.

He said that “just like mining,” not all offshore areas “are appropriate for offshore drilling, and we will take that into consideration in the coming weeks.” While he said the reaction of coastal communities would be taken into consideration, he declined to say whether any coastal governor could block drilling off his or her state’s coastline.

The proposal was vociferously opposed by the nation’s major environmental groups, and several governors, including Gov. Dannel P. Malloy.

“This is yet another disgraceful and unnecessary action from an administration that has taken us light years backward in the fight against climate change,” Malloy said. “It stands only to hurt Connecticut’s economy, our natural resources, and our coastal communities. We need a federal government that will stand up and protect our environment.  Sadly, this president has once again put special interests before people.”

The Connecticut Department of Energy and Environmental Protection also opposed opening the North and Mid-Atlantic to energy production, saying that would violate the state’s Coastal Zone Management Act, which has among its goals to restore the states coastal habitat.

The governors of North Carolina and Virginia had asked the Trump administration to leave their states out of any new plan, and Florida’s governor announced his opposition Thursday.

“I can sum it up in four words: not off our coast,” said North Carolina Gov. Roy Cooper in a press release.

Zinke’s proposal comes just after he issued a stop to a National Academy of Sciences study reviewing the offshore oil and gas operations inspection program to enhance safety.

Environmentalists said the seismic activity associated with oil and gas exploration and production would affect the migration and habitat of fish and other sea animals and the likelihood of spills, both large and small, would be devastating to the environment.

“This backward-looking plan puts oil and gas profits first and places our coastal communities and all they support at risk of the next BP-style disaster,” said Natural Resources Defense Council President Rhea Suh. “We won’t sacrifice our marine life, ocean habitat, and local economies to Trump’s big polluter play.”

Environmental groups on Thursday vowed to organize a coalition of coastal communities, fisheries and others in opposition to the plan.

“We’ll stand with leaders of vision, business owners, and fishing families on every coast to protect our oceans and shores,” Suh said.

“President Trump’s blatant effort to benefit Big Oil must be met with renewed determination from Congressional allies to protect waterways like the Sound for future generations,” he said.

The U.S. Chamber of Commerce and the oil and gas industry, however, hailed Zinke’s proposal.

“The plan announced today is a long-term commitment to securing our energy future, and would help cement America’s role as an energy superpower, creating jobs and contributing to our economy,” said Karen Harbert, chief executive officer of the U.S. Chamber of Commerce’s Global Energy Institute.

It is not clear how much oil and gas exists under Atlantic waters off the East Coast, because existing data stems largely from decades-old geological surveys that were completed before congressional and presidential bans on drilling were placed on Atlantic waters in the early 1980s.

Former President Obama also placed a new protection on waters off the coast of New England a few months before leaving office,

He used the Antiquities Act, to shield about 4,913 square miles of the Atlantic off Cape Cod from oil and gas production by designating the area the Northeast Canyons and Seamounts Marine National Monument.

That law established by President Teddy Roosevelt in 1906, allows presidents to create national monuments, including marine preserves, where oil drilling, commercial fishing and mining are not allowed.

But President Trump has directed  Zinke to “review” the Antiquities Act.

That could strip the protections from the Northeast Canyons and Seamounts Marine National Monument, a massive, coral-filled undersea area where the continental shelf drops off into the deep Atlantic waters. It includes 31 canyons and four extinct underwater volcanoes, called seamounts. 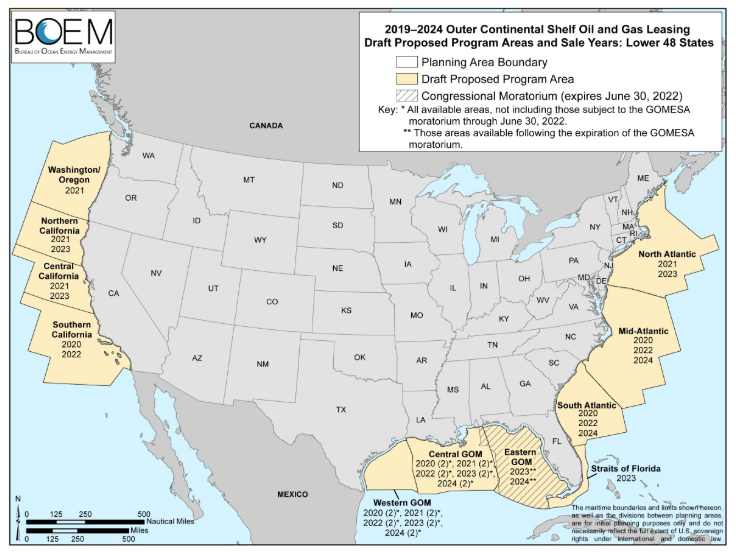