Media can help sequestered children if their parents join in 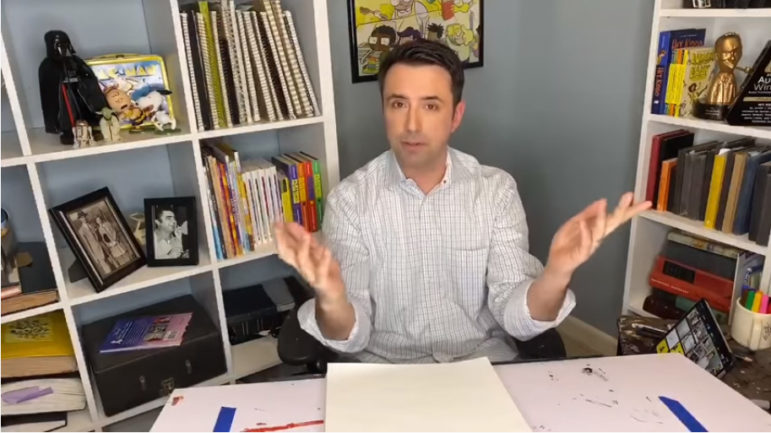 In the waning months of World War II, with families hungry for any scrap of information about their loved ones overseas, the newspaper delivery men of New York City went on strike.  Mayor Fiorello LaGuardia attempted to fill the gap with his weekly radio broadcasts, offering recaps of major events in the war and local news. Most memorably, he read, or should I say acted out the comics for the children listening to his broadcast.  He gave distinct voices to Dick Tracy and Little Orphan Annie, at times thumping enthusiastically on the table in front of him with force enough to rattle the sound booth.

In our current COVID-19 crisis, many children’s book writers and illustrators have taken up the fabled mayor’s mantle and are offering live YouTube sessions. Beloved children’s authors Mo Willems and Jared Krosoczka are sharing stories and teaching drawing in real time segments.

What resonates from LaGuardia’s time to the current moment is how successful media can be for children when adults are co-partners in the listening or viewing. Certainly this was one of the vital reasons for Mister Rogers’s enduring connection with each generation of children who were captivated by his programs. He met them on equal terms and put aside adult business to spend some time with them. Children appreciate being spoken to directly.

They feel respected when adults ask them to engage with a story or master a task. They like sharing time together. For over 40 years, my late parents, Jerome and Dorothy Singer, co-led the Yale University Family Television Research and Consultation Center and conducted research that reached this exact conclusion.

So often we complain about children sitting in front screens–according to PBS.org, American children (0-8 years of age) spend an average of two hours and 19 minutes in front of a screen each day. Yet in dozens of studies of children both in and outside the United States from the 1970s through their last published research in 2016, the Singers and their collaborators found that adult mediation was a critical component in making screen time a positive learning opportunity for children.

In an extensive report on television programming on public television, prepared for the U.S. Congress in January of 1993, they concluded that “…when adults watch programming with children, discuss the programming before or after, or with very young children, explain events as they occur, it is possible for children to learn reasonably effectively from the medium.”

We are in a rare moment in our society in which many of us are working remotely and sequestered side-by-side with our children. Understandably, we may need to have periods in the day when children will sit alone in front of televisions, computers, iPads and cell phones. Yet our hunkering down also presents us with an opportunity that we should not overlook. We can take up a marker or brush next to our child, or watch a story together and talk about it after.

In the hectic challenges of working at home, we can find a moment to be what my parents called “partners in play.” And when we do, if we listen closely, we will hear the echoes of the nasal voice of the Mayor of New York City, telling tales of Terry and the Pirates, Daddy Warbucks, and Tess Trueheart.

Jefferson Singer is the Dean of the College at Connecticut College and the Faulk Foundation Professor of Psychology.