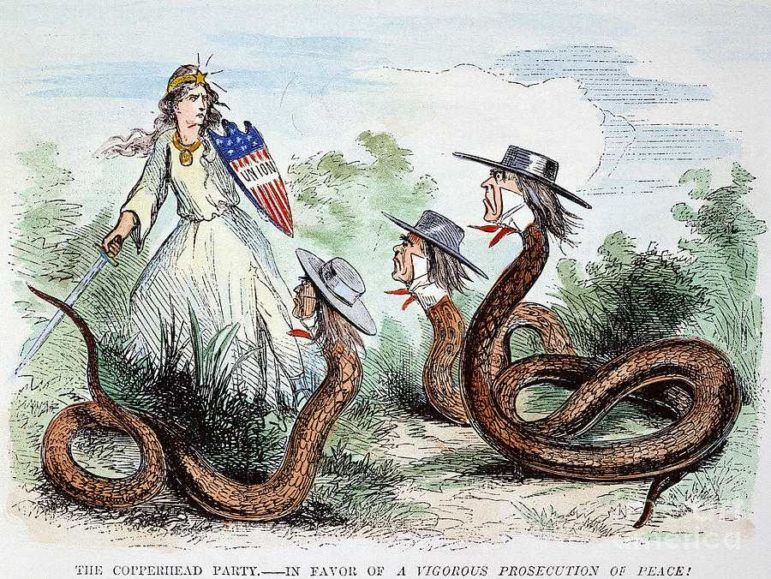 As the statues of Confederate criminals are being toppled around the country, and as other symbols of the “Lost Cause” follow suit, let’s look at Hartford.

In general, Connecticut played a significant — even heroic —  role in the Civil War. At least 5,000 young soldiers died of battle wounds or disease, and they knew why: to save the Union from slaveholders. No wonder “John Brown’s Body” was such a popular marching song.

We don’t need to preserve the images of those who kept four million people in slavery. As historian Eric Foner points out: “Historical monuments are an expression of power, an indication of who has the power to choose how history is remembered in public places.”

Confederate civil war monuments and flags are not history, they are false idols. As we examine local tributes to our own slavery enablers (and Indian killers), it’s useful to hear about an early Connecticut effort that effectively shut down any possible honor or accolade for a certain public figure.

As early as 1838, while drawing pay as U.S. congressman from Connecticut’s 1st District, Toucey was also earning $216 a day (in present dollars) for promoting the Extra Globe, a pro-slavery Washington weekly.

On May 26, 1854, the General Assembly in Hartford formally censured Toucey, by then a U.S. senator who sided with slaveholders in Washington. The condemnation was triggered when Toucey voted for the Kansas-Nebraska Act, which greatly expanded slavery into U.S. territories and caused a “distinct slide toward civil war,” according to historian Matthew Warshauer.

Undaunted by his colleagues’ criticism, the next year Toucey submitted a bill to strengthen the infamous Fugitive Slave Act. The original 1850 law criminalized support for the Underground Railroad. It made all citizens responsible for catching enslaved runaways or face criminal prosecution. In response, our state and others passed “personal liberty” laws that nullified the local effect of the Fugitive Act.

Although the new version of the slave-catcher law was a southern priority, Toucey’s job as a northern copperhead (northerner who sympathized with the south) was to provide “cover” by drawing up a federal bill to overrule the state laws.  As the Hartford Courant put it, Toucey was “the cold, cringing tool of the South, nominal senator from Connecticut, and actual catspaw in the hands of the fire-eaters.”

As Secretary of the Navy under President James Buchanan, Toucey was criticized for underfunding the country’s sea force, even as war seemed inevitable. He allowed ships to be scattered far from strategic positions like Washington D.C.; one warship was allowed to dock in Paraguay for five years. During the attack on Fort Sumter, Buchanan asked Toucey if Union reinforcements should defend the fort. Toucey said no.

Many history texts attempt to absolve him as a good guy who was “hamstrung” by his position. These summaries (including one from the Museum of Connecticut History) point to the fact that a Senate investigation cleared his name. In fact, the congressional committee was investigating graft, not Toucy’s treasonous behavior.

On October 15, 1861, Sen. Orville Platt introduced a resolution calling for the removal of the Isaac Toucey portrait from the state’s senate chamber. There was a long debate. Instead of deciding the question, pro-slavery Democrats asked to be excused from voting at all — supporting Toucey could not be easily explained to their constituents.

The ploy was rejected, so the copperheads began to walk out of the chamber. The Speaker ordered the doors closed and locked. The session ended for the night, but the vote was eventually held. Toucey’s portrait was then removed from its gilt-edge frame, which remained empty on the wall as a public rebuke. (Former Connecticut Gov. Thomas Seymour suffered the same ignoble treatment as Toucey: he  believed in secession and blamed the north for the Civil War.)

On the night of April 10, 1865, Hartford received the news of Robert E. Lee’s surrender at Appomattox. Crowds of men and women gathered at the State House and poured into the streets, a noisy celebration that lasted into the morning. A throng of celebrants went to visit Isaac Toucey at his Main Street home. Despite their calls, he never came out. One wag attached a large patriotic transparency (like a cloth slide stretched on a frame) on Toucey’s front window.

Want to remember Isaac Toucey and the others? Rather than spend a nickel on their upkeep, why not read a book? Better yet, talk to descendants of one of the four million people this country once enslaved. Grace Lee Boggs, who lived to be 100, was a civil rights activist and intellectual.

She wrote that “History is not past. It is the stories we tell about the past.”

Steve Thornton writes for ShoeleatherHistoryProject.com. He is the author of three books, including Good Trouble: A shoeleather history of nonviolent direct action (hardballpress.com, 2019).