A Metro-North booster in a blue-and-yellow vest 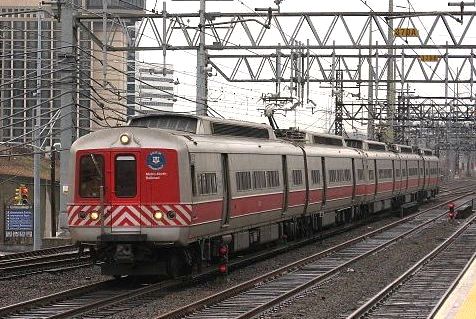 Anthony Scasino is an ambassador, not for a foreign country, but for Metro-North.  He doesn’t have a fancy consulate or imposing embassy, just the commuter railroad’s Stamford station as his headquarters.

Scasino is one of six Customer Service Ambassadors who work at the railroad’s busiest stations – White Plains, Harlem – 125th Street, Fordham, New Rochelle, Croton-Harmon and Stamford.  Having passed muster during a six-month trial, the ambassadorsprogram is now permanent and may be expanded.

Previously been a ticket agent at Stamford, Scasino has worked for Metro-North for six and a half years. Now he dons a bright blue-and-yellow vest emblazoned with “Customer Service” on the back and helps often-uncertain travelers navigate the main concourse and busy platforms.

“I really like helping people,” he says. “I hold doors open, give people directions … anything they need help with, even [with] their luggage.”

When Scasino’s shift begins at 6 a.m., the station is already teeming with commuters heading into nearby New York City.  Though some have recently complained about homeless people camping out overnight in the waiting area, Scasino says he leaves that issue to the Metro-North security team and a social services agency, BRC, which is hired by the MTA to guide the homeless into appropriate shelters. But a recent report by the Office of the New York State Comptroller says the $14 million spent by MTA on homeless outreach has been a failure.

Unlike Grand Central Terminal, which closes each night from 2 to 5:30 a.m., the Stamford rail station stays open 24 hours for cleaning and to accommodate the few passengers catching Amtrak’s overnight trains.

Scasino sees a lot of regular commuters each morning who greet him on their way to the tracks. In one case he said he saved a blind woman on an escalator from a nasty fall.

Rush hours bring a lot of crowding on the Stamford platforms as trains arrive, unloading passengers, while others bunch together waiting to board. But Scasino says he’s never seen a problem he thought would prove dangerous.  “Commuters are pretty sharp,” he said. “They know to stay back from the platform edge. That’s why we have that yellow warning strip.”

And veteran rail riders know exactly where to position themselves to be near the train’s door when it opens, giving them quick access to their preferred seating.

Have a Metro-North ambassador at Stamford is a boon to travelers because the station still lacks adequate signage.   For example, there is no local map posted in the station where people can see the station in relation to the downtown and figure out how to get there.

Years ago, when Swiss Bank was still active in town I would see nattily dressed businessmen arrive from New York and make their way to the taxi stand. Upon entering the cab, they’d say “Swiss Bank please,” and off they’d go for a two-block ride, paying a $10 fare even while the bank’s headquarters stood just 250 yards from the station.

Arrive by train at the smallest village in Europe and there’s always a area map there to guide you. Not so in Stamford.  Still, that isn’t Metro-North’s fault but that of the Connecticut Department of Transportaiton, which owns and runs the station.

Right now Scasino only works mornings, but there may be plans to expand the ambassadors’ coverage to afternoon rush hours and even weekends.  Clearly, Metro-North is working hard to improve its image and the service they provide, especially to new riders and visitors.

Jim Cameron is a public relations consultant with Cameron Communications Inc. of Darien. Posted with permission of Hearst CT Media.