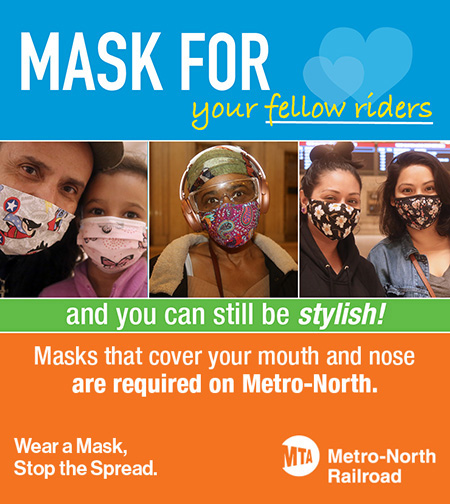 Why is Metro-North shooting itself in the foot?  While adding more trains and encouraging (no, praying!) that commuters will come back to the rails, the railroad is still refusing to make those passengers feel safe by enforcing the Federal and state mask rules.

Sure, they’ve been passing out masks on trains, but what good are they if they’re not worn?

I hate to keep harping on this issue, but we’re talking about a serious public health threat.  Unmasked passengers, even if they’re vaccinated, can be asymptomatic and spread the COVID virus to hundreds of fellow riders in a matter of minutes, let alone the hour-plus ride to New York City in a sealed tube.

Appeals to Metro-North, the MTA, to Gov. Ned Lamont and even our federal officials have resulted in no change.  The MTA seems determined to not enforce the mask rules, endangering existing riders and discouraging others from returning.

Weekday ridership is still only 46% of pre-COVID levels and doesn’t seem to be increasing as fast as hoped, what with the delta variant keeping many offices closed and those who are commuting only doing so a couple of days a week.  Heavy traffic on I-95 and the Merritt Parkway hint that many still prefer to drive to the city rather than take the train, if they have to commute at all.

Nick, an IT professional who used to commute from Stamford, posted on Twitter: “I got a new job which is 100% remote so between train pass, station parking and gas I just pocketed $5,000.  Commuting is so 1990’s”

But many don’t have a work-from-home option, like oncology nurse Casey (who asked me to hide her identity).  She rides daily from Norwalk to Manhattan and, working in healthcare, is frightened by what she sees:

“I have been riding the train through the first wave of the pandemic when I first noticed cars were being closed to group passengers together rather than allow them to spread out.  Despite multiple tweets, online complaints, and calls to Metro North my concerns were never addressed,” she told me.

Her complaints to conductors and to the railroad directly have brought lip-service.  One recent incident left her upset:

“A passenger refused to wear his mask after being asked to put it on by me and another rider.  He stated that he had been eating and that it was outrageous to even ask him to wear a mask while eating.  The conductor agreed with him stating that he could put on his mask after he was finished eating.  Mind you, at no point did I see the passenger eating and he made no effort put on his mask when arguing with me and the other passenger.  What really disturbed me was the announcement the conductor made following this encounter.  The conductor announced over the loud speaker that “masks are to be worn except when eating and drinking because there is no rule that states you can’t.”  I found the conductor’s announcement unnerving.”

A New Haven attorney finds better mask compliance on some trains more than others:

“I tend to observe more mask compliance on the Hartford Line compared to the New Haven Line. It is frustrating that passengers refuse to comply with the rules, which are implemented for our safety. When passengers refuse to wear a mask, I manage to distance myself such that I feel safe despite the maskless passenger. If the mandate were not in place, I’m sure even fewer passengers would wear masks and it would be more difficult to distance from them.”

But as trains become more crowded, social distancing may become a real problem. And Metro-North says it plans no more changes in its schedule until 2022.

As the MTA reminds us, if we “see something” we should “say something.”  That’s what commuters worried about their safety have been doing.  It’s a shame that nothing seems to be done in response.

Speeding — the most deadly highway hazard