Miss Misinformation is the pageant for me 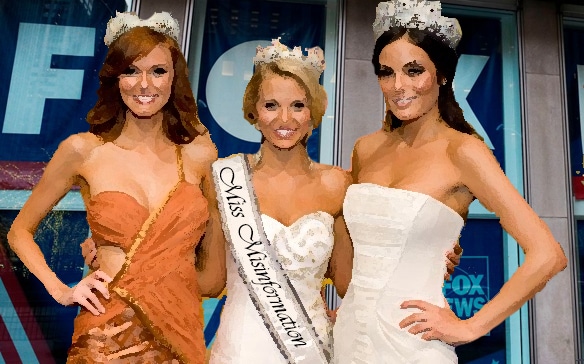 Who needs to ogle fulsome females bent on curing world hunger and striving for inter-galactic peace whilst strumming ukuleles in their swimsuits?

I, for one, won’t miss these Misses.

It’s a new century, time for a total makeover of the beauty pageant, this tawdry single gender genre (try saying those last three words really fast). It needs to capture the Zeitgeist of a blissfully ignorant world careening toward Global Warming and fascism in a 5-MPG Hummer.

The Miss Misinformation Pageant is what America craves and deserves more than ever. Reliable verifiable information is so 20th century.

And I have just the former leader of the free world to emcee the pageant —no, not Jimmy Carter. This guy has got time on his diminutive hands and beauty pageant experience to boot.

The festivities would open with the aforementioned host, attired only in his signature bright red overlong necktie and matching Speedo, firming clutching the microphone with his two undersized hands. In the background, Justin Timberlake can be heard singing the pageant’s theme song: “Lie me a River.”

An hour into this Fox TV spectacle, when Mr. Misinformation finally finishes bloviating about himself, America gets its first peak at the parade of pulchritudinous prevaricators.

Soon it will be abundantly clear that the poet John Keats —who opined, “Beauty is truth, truth beauty,” or some such romantic nonsense –was way off base: these beauties can’t tell the truth to save their sashes. Any contestant who wants to don the crown of Miss Misinformation needs to spread lies like a Fox News commentator -—or better still, like GOP (Grand Old Pettifogging) Congressmen.

The opening rounds of the competition would feature some softball questions. For example, who won the popular vote in the 2016 and 2020 presidential elections?

The answer, of course, is the man in the red Speedo.

Who built the best wall since Humpty Dumpty and got Mexico to pay for it?

Who said the COVID-19 virus would miraculously vanish when the weather got warmer in April of 2020?

Next comes the multiple-choice segment—after a word from the pageant’s sponsor, Mr. Pillow.

How many illegal immigrants voted in the 2020 election?

C. Too many to count

D. All of the above

How many pedophiles are there in Joe Biden’s cabinet?

The answer is C.

Which current illegitimate U.S. “President” is planning to introduce a Constitutional amendment to ban the ingestion of all meat products —with the exception of human flesh?

Joe Biden, he’s totally going to do it.

Who stormed the U.S. Capitol on January 6?

B. Your Aunt Tiffa

A. Make urban voters drop and give electoral officials 50 pushups

B. Allow just one voter drop box, in Lebanon, Kansas, the geographic center of the United States

E. All of the above and more; we have only just begun to suppress

Now tell me this isn’t a beauty of a pageant for our times.