More energy utility regulations are not the answer 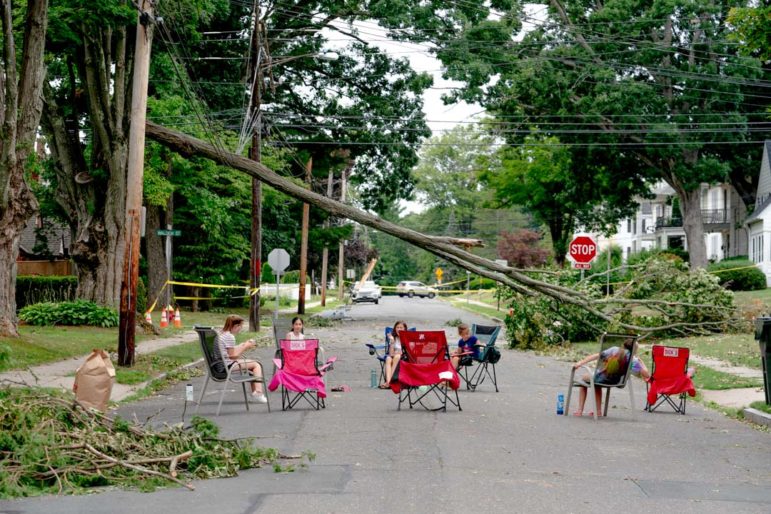 Girls have a watermelon break after cleaning the branches left after Tropical Storm Isaias on Thursday, Aug. 6 on a blocked road in their West Hartford neighborhood. "Why not make the best of it?" Olivia Bywater, 13, far left, said about resting on the blocked road.

In the wake of a massive power outage following Tropical Storm Isaias, anger and frustration have been on full display from Connecticut residents and regulators while utilities took up to nine days to restore power to those effected. Eversource Energy, the utility that delivers most energy to the state, has largely taken the brunt of the fallout for the excessive restoration times, while more than 800,000 people waited for their power to return.

Just this week, Eversource CEO Jim Judge was asked to testify before the Energy and Technology legislative committee later this month to answer questions about why response times to restore service was painfully slow. Political leaders have not held back their outrage, while others have proposed broad regulatory reforms be created to help “prevent” this from happening in the future.

PURA, the Public Utilities Regulatory Authority, was already investigating both Eversource and United Illuminating – the two utilities that provide electric service to Connecticut customers – for the recent rate hikes that started July 1. Now PURA is looking into the preparation for and response to the recent blackouts.

But that’s not all. There is a new idea being floated by Sen. Norm Needleman, D-Essex, and Rep. David Arconti, D-Danbury, among others, calling for the creation of the “Take Back Our Grid Act.” It’s not a proposed bill, but it certainly has gained widespread attention.

Perhaps on paper some of these ideas and actions seem like the right things to pursue. But are we focused on the right things? Will more regulation ultimately solve the problem?

RESA, the Retail Energy Supply Association, believes the challenges that utilities collectively are facing – including Eversource – will not be solved by adding more regulations and rules to follow to all the complexities that exist now. Perhaps we need to take a step back and look at the situation through a wider lens.

For starters, we must keep in mind that we all have a collective goal – providing people access to safe, reliable power. When we have companies like Eversource – who are responsible for wires, poles and transmission – become distracted and defocused by wearing both electric provider and electric utility hats – no one wins… especially customers.

Electricity providers are companies that purchase wholesale electricity from electricity generators and sell it at a retail level to the general public. They are also responsible for having electricity delivered to the appropriate local utility company that serves their customers.

Electric utilities are the companies that own and maintain utility poles and power lines. They are responsible for the distribution, or delivery, of electricity to the customers who live in their service area. The electric utilities also employ the line workers who restore your power after a major weather event and repair the downed power lines and damaged poles.

RESA believes that the right solution does not exist with more regulation or legislation. And RESA’s members (retail suppliers) recognize that utilities have their hands full with wires, poles and transmission. Utilities need to be afforded the opportunity to focus on making reliability their number one priority.

Often utilities and retail suppliers see themselves as competitors rather than strategic partners. The need for transparency across all parties – not simply one party – would be a place to start.

Having legislators and regulators continue to blame utilities for all today’s issue would be shortsighted. With each challenge there is an opportunity. If the goal is to provide consumers reliable service, then we must afford utilities the opportunity to be laser-focused on what they do best.

Daniel W. Allegretti is a spokesman for the Retail Energy Supply Association.

Connecticut’s children benefiting from a strong continuum of support services

Will gambling problems among Connecticut students be a new part of education?