It’s been three years since we last embraced our precious little boy, Noah. At 6 years old, he was the youngest child murdered at the Sandy Hook Elementary School. While our family may have managed to live through this tragedy, the passage of time has nowhere near dimmed the vivid memory of that day nor made it any less difficult for us to cope with the pain and anguish of losing our only son. 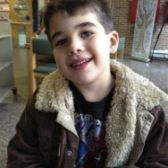 The heartache of burying a child is a sorrow we would not wish upon anyone. Yet to our horror, we have found that there are some in this society who lack empathy for the suffering of others. Among them are the conspiracy theorists that deny our tragedy was real. They seek us out and accuse us of being government agents who are faking our grief and lying about our loss.

Each new high-profile act of violence inspires more conspiracies and creates new victims of harassment and defamation, whether it be the Boston Bombing, the terrorist attacks in Paris or the most recent massacre in San Bernardino, CA. In that instance, a lawyer for the family of the shooters said Sandy Hook did not happen. And don’t get us started on Donald Trump and his rantings on the Alex Jones radio show. It is obvious by the demographics of the show’s audience that Trump appeared as a guest looking for votes from the conspiracy crowd.

Although many of these tormentors persecute us behind anonymous online identities, some do so openly and even proffer their professional credentials in an attempt to lend credence to their allegations.  In this piece we want to focus on someone who is chief among the conspiracy theorists — Florida Atlantic University Prof. James Tracy.

A plethora of conspiracies arose after Sandy Hook, but none received as much mainstream publicity as Tracy, who suggested that the shooting never occurred and the Obama administration had staged the “event” to prepare the country for strict gun control measures.

More than 800 news organizations covered the story of his denial. As a result, this professor achieved fame among the morbid and deranged precisely because his theories were attached to his academic credentials and his affiliation with FAU. Tracy has enjoyed tremendous success from this exposure and has since leveraged it into a popular Internet blog and radio program. Worse yet, it has elevated his status and fame among the degenerates that revel in the pleasure of sadistically torturing victims’ families.

It cannot be denied that Tracy has carved out a significant presence in the same Sandy Hook “hoax” conspiracy movement that has inspired a wave of harassment, intimidation and criminal activity against our family and others.

In fact, Tracy is among those who have personally sought to cause our family pain and anguish by publicly demonizing our attempts to keep cherished photos of our slain son from falling into the hands of conspiracy theorists.

Tracy even sent us a certified letter demanding proof that Noah once lived, that we were his parents, and that we were the rightful owner of his photographic image. We found this so outrageous and unsettling that we filed a police report for harassment. Once Tracy realized we would not respond, he subjected us to ridicule and contempt on his blog, boasting to his readers that the “unfulfilled request” was “noteworthy” because we had used copyright claims to “thwart continued research of the Sandy Hook massacre event.”

His blog post was echoed dozens of times on conspiracy websites, including one maintained by Tracy’s colleague and frequent collaborator James Fetzer, a Holocaust denier who expounded upon Tracy’s article by stating that our refusal to respond to this obscene ultimatum “implies that Noah did not die at Sandy Hook and confirms that Lenny is a fraud.”

Although FAU issued a “reprimand” to Tracy for the irresponsible and insensitive comments he made in late 2012, he has shown no remorse and continues to conceive conspiracy theories out of each new mass shooting. While Tracy may now limit mention of his association with FAU, it has not gone unnoticed by the press.

After Tracy spouted yet another ridiculous theory concerning the Washington Navy Yard shooting of 2013, Education Editor Eric Owens of the Daily Caller cited the professor in declaring that “Florida Atlantic University remains and apparently always will be the worst place in America to go to college.”

When do the interests of the college and its students take precedence over the tenure of a professor who has clearly proven himself in violation of the university’s own policy? The FAU Academic Affairs Faculty Handbook clearly states that “A faculty member’s activities which fall outside the scope of employment shall constitute misconduct only if such activities adversely affect the legitimate interests of the University,”

In an April 2013 Huffington Post article, Heather Coltman, interim dean of the College of Arts and Letters, clearly states that “Tracy’s earlier posting has resulted in a number of negative consequences for FAU, including a large number of parents who withdrew their children’s applications to FAU, a student whose parent asked that she be withdrawn from his class and a donor who withdrew his support to the Department of History.”

It matters not if Tracy simply refrains from mentioning FAU when defaming murdered Americans and their families. There is ample evidence to demonstrate that his extracurricular misconduct has already adversely affected FAU’s reputation and will continue doing so as long as he continues down this path.

It is time FAU reassess if their priorities properly reflect the best interests of their staff, donors and — most importantly — their students. “The First Amendment guarantees freedom of speech, but the Constitution does not guarantee that you can’t be fired for expressing your beliefs as part of your job,” says the National Education Association. “The courts could decide either way and the burden of proof shifts sharply to the professor.”

FAU has a civic responsibility to ensure that it does not contribute to the ongoing persecution of the countless Americans who’ve lost their loved ones to high-profile acts of violence.

Veronique and Lenny Pozner are the parents of Noah Pozner, one of the 20 children killed in the December 14. 2012, Sandy Hook massacre. Lenny founded the HONR Network, aimed at combating conspiracy theorists on mass shootings.