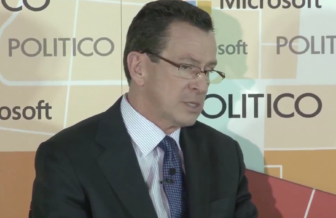 Malloy has joined other Democratic governors who are defying a number of President Donald Trump’s policies – from taxes to guns – just as their GOP counterparts fought against key Obama-era initiatives, such as expanding Medicaid thorough the Affordable Care Act in their states.

“You would be hard-pressed to find anyone who is less alike than the president,” said Malloy, speaking about himself, at a Politico “State Solutions” forum.

He derided Trump’s response to the Parkland, Fla., shooting that claimed 17 lives, saying the National Rifle Association “invested $30 million in Trump” and won’t let  new federal gun legislation move through Congress. In the last election cycle, the NRA spent about $20 million on attack ads that targeted Hillary Clinton and about $11 million on ads that supported Trump.

Malloy cited a new multistate initiative to strengthen state gun regulations as evidence that states must act on their own on gun control.

Connecticut’s governor has also joined other “blue states” in a number of other challenges to the Trump administration.

After Trump signed into law a new federal tax overhaul that limits the deductibility of state and local income taxes, Malloy proposed allowing municipalities to establish non-profit organizations that would give taxpayers credit on their property tax bills for contributions that would be classified as charitable deductions on their federal tax forms. Malloy said he wanted to be the first to make an end run of the new limitations.

“I’m trying to beat the other states on this,” he said.

Connecticut also has joined a number of other high-cost Democratic states suing the federal government over the capping of state and local tax deductibility.

And because the tax overhaul eliminates IRS penalties on those who don’t have health insurance, a provision known as the “individual mandate” in the Affordable Care Act, Malloy said Connecticut is “calling for its own mandate.”

Although the Democrats are in the minority of governor’s mansions — there are only 16 Democratic governors — they are banding together to push back on Trump policies and enter into agreements that circumvent Washington.

Malloy is a member of the Climate Alliance, formed in the wake of Trump’s announcement that he’d withdraw the United States from the Paris climate agreement, and Connecticut has sued the federal government on a number of other issues, including the delayed implementation of an Obama-era rule that would expand the number of wetlands and small waterways protected by the Clean Water Act and the Trump abolition of Obama-era net neutrality rules.

“We have a national administration that is not keeping with where the American people are, and when it becomes as evident as it is, then it’s incumbent on people with half a brain to figure out a way around that,” Malloy told Politico.

Malloy spokesman Leigh Appleby said, “From attempting to strip health care from millions of Americans, to rolling back environmental protections, to giving massive handouts to the wealthy while raising taxes on middle-class Connecticut families, President Trump and his GOP allies in Congress have put forward a disastrous agenda that will hurt Connecticut families and businesses.”

“Governor Malloy has taken a leadership role in pushing back against the Trump administration’s most regressive policies through executive action, legislative remedies, legal challenges, and by working in concert with colleagues…” Appleby said. “The bottom line is that governors and state legislatures are the first line of defense against Washington’s backwards policies.”

Malloy was not the only Democratic governor this weekend to turn down invitations to the White House. That may be a result of Trump’s disinterest in what they had to say.

This year’s heightened partisanship at the NGA is rare. Usually governors try their best to come to agreements at these reunions on issues of common interest, such as funding for the National Guard and multistate projects.

Trump pushed back, saying his proposal would only arm a percentage of teachers, not all of them.