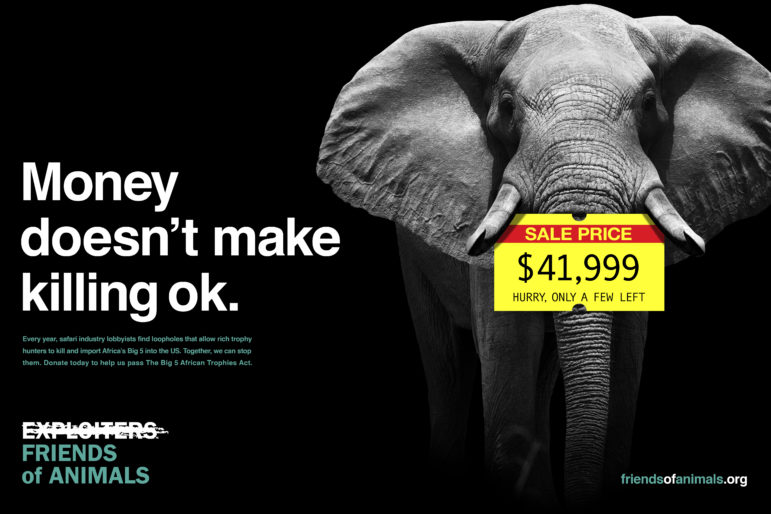 Some African elephants are just a step away from extinction.

That’s what a new report from the International Union for the Conservation of Nature revealed in March.

The population of savanna elephants has fallen 60 percent since 2008. They are now considered endangered, while forest elephants have declined by more than 86 percent. They are considered critically endangered. Together, there are only 415,000 elephants left in Africa.

However, Connecticut can help ensure the future of elephants, giraffes, rhinos, leopards and lions by passing SB925, legislation that bans the importation, possession, sale or transportation of the trophies of African’s Big 5. It recently passed out of the Environment Committee 24-8 and is headed to the Senate.

In recent years, the IUCN also elevated the threat level of giraffes two categories to “vulnerable to extinction,” estimating there are only 97,500 giraffes remaining in Africa. Leopards have lost 31 percent of their range worldwide in the past 22 years; plus, there’s been a 59 percent decline in their prey populations across 78 protected areas in Africa. Lions have disappeared from 94 percent of their African range —their numbers have plummeted to 25,000. And overall, the black rhino is critically endangered while the white rhino is classified as near threatened. Some subspecies are already extinct in the wild.

These species are ecosystem engineers, climate change combaters and apex predators crucial to ecosystems. Elephant and rhino grazing maintains the Savannah grasslands, which function as ‘carbon sinks’ that absorb more carbon compounds than they release.

Trophy hunters want you to believe they are better than poachers because they have a permit from Fish and Wildlife Service. A permit is required because they all are “protected” under the Endangered Species Act. (Giraffes currently have no protection under the ESA so hunters don’t need a permit to kill them to mount their head or to make Western boots, pillows and rugs from their skins.)

However, Cecil the lion did not suffer any less because the American who shot him with the first arrow at 10 p.m. July 1, 2015, had a permit. Wounded, he was left for at least 11 hours before the hunter found him and finished him off with a second arrow. That was key because the hunter wanted a bow hunting record. (If a rifle were used the record would be disqualified.)

Permits do not make a difference to the offspring of dead animals who must survive without parents to teach them about the harsh lessons of nature and avoiding conflicts with humans. Leopard cubs, for example, would normally stay with their moms for two years

Hunting organizations like SCI claim that without money from hunting revenues there would be no money for conservation in Africa. SCI has said 50 to 90 percent of revenues are paid back to the local communities.

This is untrue, Brent Stapelkamp, founder of the Soft Foot Alliance, a community-based trust in Zimbabwe, said last month. He lives adjacent to a wildlife area and points out that not a penny has been allocated to the community from several elephant hunts in the last three years. He calls such claims nonsense. Recent studies and other evidence also show their statements have no credibility.

It is also nonsense to think FWS can vet trophy hunting abroad and monitor conservation programs despite doling out permits.

Even though the American dentist had a permit from FWS, Cecil was poached. A minimum age limit for hunting lions is set at 6 years old by the wildlife authorities in Zimbabwe. Of the five lions legally hunted in 2014, four were under six, so as a penalty was there were no lions on license for 2015, the year Cecil was killed. With the high degree of corruption in countries like Zimbabwe, dedicated and well-managed conservation is not a priority. A failure of the strict monitoring of the age, and sex of animals and a lack of penalties is a serious threat to these species.

The truth is, hunting organizations do not want the public to know that non-consumptive community-based wildlife watching tourism is what provides incentive for conservation in Africa.

It is the silver bullet for protecting African wildlife, not actual bullets.

Priscilla Feral is President of the Darien-based Friends of Animals.