No time to waste for our health care workers 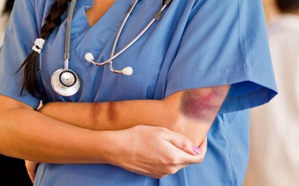 The shared experience of the COVID pandemic, now in its second year, has at times shown the potential to defuse the toxic polarization that divides our nation. The indiscriminate harm that the airborne COVID virus inflicted on millions of people and families did, at times, bring us back to the basics of protecting our communities, of looking out for each other, and working together to guard public health.

Although some of that consensus has eroded in the face of “mask wars” and vaccination conspiracies, at least one unifying tenet still stands: that our nation’s health care workers deserve our universal thanks and respect for putting their lives and health at risk, directly treating and caring for millions of patients suffering from COVID-19’s deadly grasp.

But as all those admired caregivers can attest, there is a second, colliding epidemic they continue to face in the form of frightening levels of on-the-job violence, at rates that far exceed those in any other sector of our economy. The U.S. Bureau of Labor Statistics (BLS) has studied this alarming phenomenon, and they found that 73% of all violent incidents that happen in American workplaces happen to health care and social assistance employees. Year after year, BLS tallies tens of thousands of violent incidents that could be prevented in the first place by better training, workplace design, and staffing.

As BLS and the Government Accountability Office (GAO) reported in 2016, the primary source of this violence comes in the form of assaults: kicking, hitting, spitting, even the use of firearms and other weapons by patients, or those who accompany them. Two years ago, at a Congressional hearing on this topic, experts confirmed that this alarming trend is being driven by the rise in untreated behavioral health illness and opioid addiction. We heard how ambulance calls for an overdose or domestic disturbance can potentially turn into a flashpoint of violence where EMTs or emergency room staff suddenly find themselves on the defensive. Witnesses described how a home health and social work visit can turn into a nasty physical fracas.

As a result of those hearings and the findings of the GAO 2016 report, I introduced H.R. 1195, the Workplace Violence Prevention for Health Care and Social Service Workers Act, which would require an enforceable workplace violence prevention standard within 42 months after enactment, at about 200,000 health care centers across the country. The standard would require that covered employers develop a Workplace Violence Prevention Plan that is tailored to the specific conditions and hazards present at each workplace — not a “one size fits all” mandate.

The nonpartisan Congressional Budget Office (CBO) has done the math. They found that for the first two years, these 200,000 health care centers would pay on average $9,000 annually to start putting updated workplace violence prevention procedures in place. From there, CBO found that the average cost drops to $3,750 per year. That’s a small price to pay to help protect health care workers from viscous assaults, and it doesn’t factor in the savings an employer could experience with fewer violent attacks against their workforce.

This isn’t rocket science. Since 1996, the Occupational Health and Safety Administration (OSHA) has published voluntary guidelines that recommend many commonsense measures that health care employers can take to reduce the risk and severity of violent incidents. These guidelines are an excellent resource and have been shown to work, but the fact that we continue to see a growth in violence means that relying on ad hoc, voluntary adoption is failing to protect our health care heroes. We need an enforceable standard.

Over the last five years, despite verbal support for an enforceable OSHA rule from the previous two administrations, nothing has moved in the OSHA rulemaking process. History shows that without a deadline in statute, OSHA, incredibly, takes 15 to 20 years to issue a standard. Indeed, in the last Administration, despite giving lip service for three years to creating a new rule, not a single administrative step in the rulemaking process was actually taken to protect health care and social workers. Every year we fail to enact this standard, we are condemning thousands of nurses, doctors, EMTs and social workers to suffer preventable injuries on the job, sometimes fatal.

That’s why a huge coalition of health care workers, including the American College of Emergency Physicians, National Nurses United, the American Nurses Association, the National Association of EMTs, and many more have come together begging Congress to enact this bill. The good news is that this year, a strong bipartisan majority in the House came together on April 16  and voted 254-166 in favor of H.R. 1195. This bill was bipartisan from the start —introduced with original co-sponsors from both sides of the aisle— and unlike many other bills that pass on party lines or with only meager amounts of bipartisan support, this measure attracted 38 Republican votes.

No more delays. It’s time that Congress sets deadlines so that we can get preventive measures in place nationwide that we know will save lives and livelihoods.