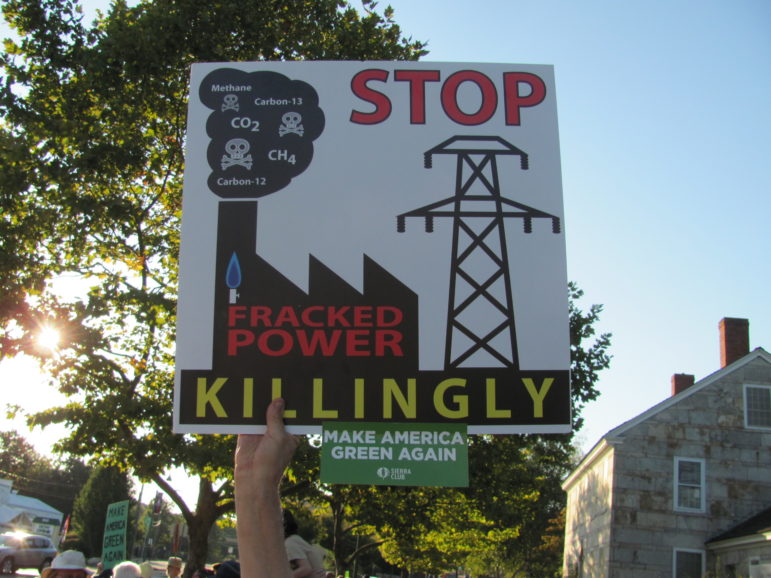 A protester holds up a sign calling for state officials to halt plans for the Killingly plant. The protest took place in 2019.

Gov. Lamont, I have spoken with you informally twice over the past month at public appearances you have made about your role in the possible construction of a second fracked-gas power plant on Lake Road in Killingly.  You have stated that you have no power to stop the plant from being built.  You have also indicated your reliance on “the market” to prevent the necessary financing from being secured by the developer, NTE.

State Department of Energy & Environmental Protection (DEEP) Commissioner –your appointee– Katie Dykes speaks as though she has no power against the approval of the regional ISO body, so can’t stop approving permits for the Killingly plant.  ISO, in a separate statement, has maintained that each state decides according to their policies and regulations whether an energy plant can be approved.

This neatly avoids responsibility if this, the only new fossil fuel plant planned for New England, is approved by your DEEP to emit over two million tons of carbon dioxide, particulate matter and other pollutants, including nitrous oxides, that will be added annually to those emissions already produced about a mile away by the existing Lake Road Generating gas power plant.  Maybe your regulations need updating?

This second gas power plant for Killingly is a glaring example of a conflict with your Governor’s Council on Climate Change goals and with the state’s Global Warming Solutions Act, as was publicly pointed out in September, 2019, by 26 Connecticut state legislators who urged you to oppose this project.  This is the basis upon which your administration should arguably be putting a stop to these additional fossil fuel emissions, which will only work against those goals.

Some may respond that, since the energy produced at this new plant is not needed in Connecticut and will be exported regionally, those emissions should not be counted.  If you live at Alexanders Lake in Killingly or in a surrounding town like mine, Thompson, or if you value the Connecticut Audubon Center,  the Bafflin Sanctuary and Trail Wood Sanctuary in Pomfret, maybe you don’t want to see those wetlands and wildlife risked.  The Northern long-eared owl (endangered), Eastern box turtle or wood turtle (both special concern species) will not be protected when, according to the developer’s plans, a pipeline is drilled under the Quinebaug River.

And if you are a parent, an elderly resident, or have asthma or other health vulnerabilities, where do you go to avoid these emissions when this proposed plant is within three miles of four Killingly public schools, a day care center, Owen Bell Park, Westview Convalescent Center, and the adjacent 74-unit elderly housing complex, not to mention the homes of hundreds of Lake Alexander residents?  The proposed emissions stack height for the NTE gas plant is only 150 feet, much lower than the EPA standard practice minimum of 213 feet.  The reason for this minimum height is to avoid atmospheric concentration of pollutants into the surrounding air, water and soil.  So where will these residents –your constituents– go to avoid these pollutants?

Those of us who have opposed this project since 2016 are calling on you to show some political courage and prevent this last DEEP permit from being approved.  If this state entity charged with protecting our environment, our citizens, and ultimately our planet allows NTE to go forward –as their latest monthly report indicates– it will be painfully obvious that our state refuses to protect our environment.  Oh, yes, evidently NTE has been able to find investors and is now touting a groundbreaking ceremony over the next few weeks. (This, from their own email updates.)  So, looks like maybe “the market” has also failed to protect thousands of northeast Connecticut residents from the carbon dioxide and methane that are part of the innocent-sounding “natural gas” energy plant.

But, then, I thought that was your job, Gov. Lamont.