Once upon a time in Connecticut 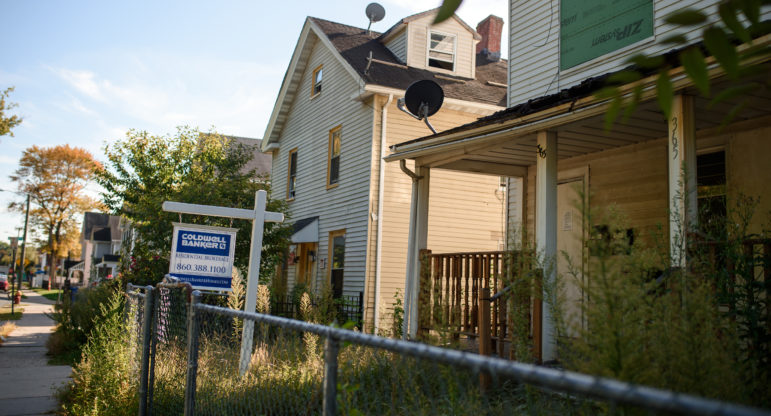 Homes in the Frog Hallow neighborhood of Hartford.

To my white friends here in Connecticut. Here’s a story of how white supremacy and structural racism are passed down to the next generation of our children:

Once upon a time… a developer is approved, using some state and federal dollars, to build “affordable” apartments in a predominantly, white wealthy suburban town that borders a predominantly black and brown, low-income city. The apartments are to be located near the border of the two municipalities because zoning in the white town restricts multi-family apartments to only one neighborhood.

About five years ago, after the first units of affordable housing were built, the all-white, wealthy school board redistricted Greenfields so that all the affordable apartments feed to the same elementary school. This was done despite the fact that some of the housing in the neighborhood is actually closer to other elementary schools. The school board said it was meant to “keep the neighborhood together.”

In 2010, when the first units of affordable housing were slated to be built, white people who live in Greenfields and other neighborhoods were very upset. They came out to many zoning meetings, protesting the housing construction because of “safety concerns.”

“The traffic will be terrible,” they said. “The design doesn’t match the aesthetic of our town,” they cried. “We moved here for the good schools This will make our classrooms more crowded,” they lamented.

However, change is inevitable and so the housing was built. While it is “affordable” for the middle and upper class people in town, the apartments still rent for upward of $2,000/month. This is quite unaffordable for many of the people living in the city next door.

The city next door has all the issues that come with generations of deep racial and economic segregation: drastically underfunded schools, high rates of uninsured families, high rates of childhood asthma and eviction, large pockets of deep poverty, and more. Some families decide they will do anything it takes to get out of the conditions of the city and offer their children “a better chance.”

The history of redlining, which institutionalized racial segregation in towns and cities across Connecticut back in the 1930s, means that many of the people in the city also are black, brown, and immigrant families.

So, some black and brown families start slowly moving into the apartments. At first, everything appears to be harmonious. And many of the white families who live in Greenfields, while making no attempt to socialize or be friends with the new families, love to discuss at dinner parties “the wonderful diversity” at their children’s elementary school.

Now in 2019, more housing is scheduled to be built because, since it is not really affordable, it is actually profitable. This rate of rapid change scares some of the more conservative members of the town leadership. “The fabric of our town is changing., This isn’t the town I grew up in,” they say to each other, poolside at the country club.

Some of them take it upon themselves to make the apartments a focal point of the next local elections and, while door-knocking with constituents, talk openly about how the apartments are “a real problem,” and how “crime has increased.”

Meanwhile, back in the neighborhood, the redistricting that the school board did means that as more black and brown children enter the Greenfields school district, the less and less white the school is becoming. Some white families start to move out of Greenfields; not out of the town, just to another neighborhood.

When asked by their peers why they are moving, they say “Our child needs special attention and we felt the school wasn’t providing it.” Some say, “We needed more space.” Others say, “We weren’t really happy at the school.”

The white flight is a slow trickle at first, but as the number of black and brown bodies in the Greenfields elementary school approaches 50%, it escalates rapidly. Some families, who just five years ago were so proud of the diversity, move their children into school districts in the town that are 90% white and don’t mention diversity again.

The “problem with the apartments” turns out to be an excellent campaign strategy and several candidates are elected. This leads the town council to pressure the mayor to increase policing in that neighborhood. Since Greenfields is on the border, there is already an aggressive practice of racial profiling in that zone, as the police understand it is their job to keep the white town people safe by keeping the black and brown city people out.

But what happens when the city people become the town people?

What had been mainly a practice of traffic stops turns into a practice of police harassment and terrorizing of the black and brown residents in Greenfields. And since many of these residents are culturally very different from the white residents, their behaviors are immediately suspect.

Every behavior is scrutinized and then criminalized.  “Why are cars parked on your lawn? Where are you walking to this late? How many people you got living in this apartment? Are there any drugs or alcohol on the premises? Do you own any weapons? Is this your daughter? Let me see your license and registration.”

Police report statistics to the town council members, who feel satisfied that they are getting to the “root” of the problem.The black and brown residents organize within their neighborhood to address this harassment, and they are labeled “angry, aggressive,” and of course, “ungrateful.”

At the next school board meeting, the board quietly approves an extension on the Greenfields school to address “overcrowding,” rather than redistricting students to the other, predominantly white elementary schools.

A year later, the school board, justifying that they recently spent all that money on building the extension, publicly votes to take dollars away from the Greenfield school district. The black and brown residents organize to address these issues and they are labeled “angry, aggressive” and of course, “ungrateful.”

Over time, the concentration of black and brown bodies in one area of the town is fixed, and the lack of investment in the local school and other community infrastructure — combined with the aggressive police presence — makes it an “undesirable” place to live. The white families who once touted diversity now lament the state of the neighborhood. “Isn’t it so sad, the people there just need so much help.” Real estate agents quietly steer white families away from buying in Greenfields. “You’ll get more bang for your buck in other neighborhoods,” they often say.

After 20 years of organizing, the black and brown residents of Greenfields are tired, so when a hedge fund billionaire comes along to offer to build a new charter school in their district as the solution to all their problems, many of them agree.

The shiny new building and higher standards of curriculum appear to be a godsend at first. But since the charter school is part of a national network built and privately held by white, wealthy people, the aggressive disciplinary policies of the school mimic the early days of the police harassment in their neighborhood.

And when the black and brown residents organize to address these issues, they are labeled “angry, aggressive,” and of course “ungrateful.”

Because they are good people, many of the white families send their high schoolers — who have internalized a deep sense of superiority — to volunteer at the public elementary and charter schools. Many of the black and brown children, who do not have one teacher of color, can sense their bodies are a problem and internalize deep feelings of inferiority.

And so it goes, in the Land of Steady Habits.

Most of the time, the white residents of the town at the annual Memorial Day parade just shake their heads at the state of things and say, “what can we do? That’s just the way it is.”