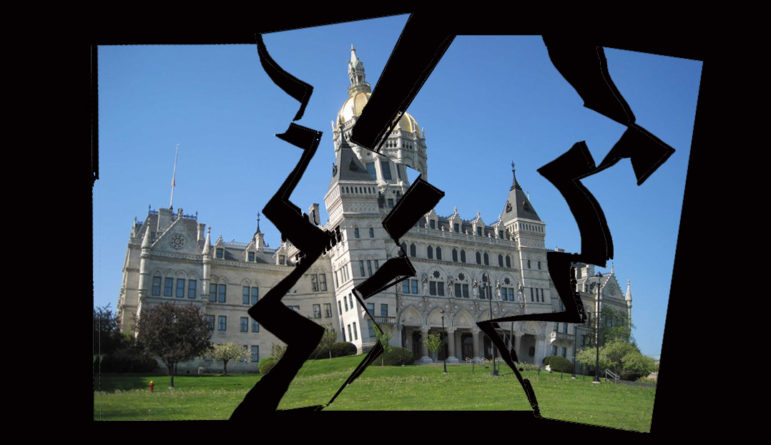 “We must not promise what we ought not, lest we be called on to perform what we cannot.”

The first rule of public office: Your word is your bond. If you break it, you lose the people’s trust.  It is sad to see how far some have strayed from this principle.

When promises are broken people feel betrayed.  No wonder so many people are losing faith in Connecticut.

Connecticut’s economy is in trouble. It has gone from the top in the U.S to the bottom. Hopes for a new day were dashed as promises made to improve the economy and grow jobs were quickly broken. The ruling party’s attack on businesses and residents has them looking for the door, depressing tax revenues and home values.

Connecticut’s administration pledged to make government live within its means and balance the budget. When faced with massive state deficits from spiraling employee costs, they employed past practices of more taxes; kicking the can down the road by refinancing debt and guaranteeing platinum level state employee benefits far into the future.

They proclaimed that more taxes would kill our competitive advantage.  Yet, they passed increases to the income tax in 2009, 2011, 2015 and 2019 on LLC’s.  Unprecedented numbers of anti-business bills, expensive union contacts and excess spending continue unabated.

To understand how this evolved we need to look at the promises made and what actually happened in two parts.

Part one, today, examines the promise to improve Connecticut’s business climate; not increase the income tax, reduce healthcare costs; install tolls only on trucks and the lock boxing of transportation funds.

New legislative leaders are hostile to businesses vital to our state, saddling them with massive burdens that hurt their ability to grow. They passed the nation’s highest minimum wage with an automatic 2 percent increase every year thereafter.  Westport estimates that it could cost an extra $300,000 annually for summer student workers.

The ruling party passed the most aggressive 12-week paid family medical leave act (FMLA) in the country on businesses with one or more employees, paid for by a .5 percent payroll tax for workers making up to $130,000 per year. State unions are exempt. The state has the option of increasing the wage deduction if this government-run program runs out of money. Paid time off could be used for a family member or those “like” family.  Employees will be forced to pay even if they already have coverage.

The governor promised to veto the bill saying it was “ill-conceived and simply will not work.”  He reversed his pledge and is now planning to sign it.

The promise not to increase the income tax:

The majority party passed $700 million in new taxes.  A $50 million income tax increase was levied on small business pass-through entities, such as LLC’s, adding to the cost of doing business.  And an additional $150 million in other tax and fee increases was passed.  The majority also passed a new exit tax surcharge of 1 percent on top of 1.25 percent on high priced homes; extended the temporary 10 percent business profit surcharge and rescinded $1 billion in hospital tax relief.

The Democratic leadership proposed a “public option” state-run healthcare mandate that would institute a $10 per member, per month surcharge on individual health insurance policies and a $5 per member per month surcharge on group health insurance policies.  State employees would be exempt. This state program would be in direct competition with the healthcare insurance industry and put 48,000 private insurance jobs at risk. The public option would damage the private market.  CIGNA said it risks their long-term viability and have threatened to leave the state if enacted. The administration first opposed it and then reversed itself.  The governor now says it deserves support.

Bills to take over private pension and health insurance jobs and bring back tolls failed for now but the administration promises to keep trying. Democratic leaders also failed to pass capital gains and investment income taxes; a statewide property and car tax, sales taxes on legal, accounting, engineering and investment services; allowing parolees to vote; forced regionalized schools; pot legalization; and a proposal to divert teachers pensions payments to towns that would add to the highest- in- the nation property taxes.  These bills, like tolls, could come back to bite us later.

Let’s hope not. Connecticut needs to keep its promises to cut costs and give businesses the confidence to stay and grow jobs.