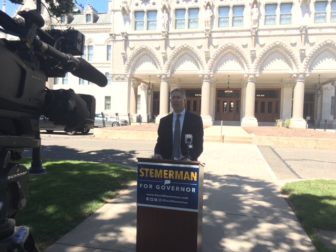 A proposal Thursday by Republican gubernatorial candidate David Stemerman to cut the ranks of state employees, privatize state services, and force employees and retirees to accept smaller pensions is the latest sign of the Connecticut Republican Party’s comfort in engaging public-sector unions in open warfare.

Most of the five Republicans seeking the GOP nomination in next month’s primary have promised a tougher approach to state-employee benefits, a marked departure from the last race for governor, when candidates here shied away from Scott Walker, the Republican governor who curbed collective bargaining for public employees in Wisconsin.

Walker was the keynote speaker at the GOP’s annual fundraising dinner in 2013, invited by Jerry Labriola, then the state party chairman. But the prospective gubernatorial candidates in the audience, including the eventual nominee, Tom Foley, and another contender, Danbury Mayor Mark Boughton, declined to endorse Walker’s combative approach to unions.

“That doesn’t seem to be practical here in Connecticut,” Foley said then. “I don’t think that’s going to happen.” Boughton, who is the GOP’s convention-endorsed candidate this year, agreed with Foley in 2013, saying, “I don’t know if it’s necessary to have as confrontational an approach.”

Stemerman showed Thursday that confrontation is now the norm, saying that public sector unions are a corrupting influence at the State Capitol that have propped up a Democratic majority and duped their own members into believing the state can make good on unsustainable health and retirement benefits.

“They have been lied to by their own representatives, both elected and union leadership,” said Stemerman, a former hedge-fund manager seeking his first elective office. “That’s why they are in the position they are in today. I am appalled by how they have been treated by their own. It’s absolutely, completely disgraceful and unacceptable.”

Stemerman blamed the state’s unfunded pension liability on the unions that negotiated benefits, initially sparing the successive generations of Democratic and Republican lawmakers and governors who failed to consistently make actuarially required contributions to the system since its inception more than 60 years ago.

“Over 40 years of uninterrupted single-party rule in the state legislature is a strong indicator that Connecticut’s political process is rigged and needs to be changed,” Stemerman said in a plan to curb unions’ influence. “Our legislature has been held hostage in the stranglehold of a single special interest group — state employee labor unions.”

Only in response to questions did he allow that Connecticut’s political leaders were “complicit.”

This year, a cornerstone of nearly every GOP campaign is ending pensions for new state employees, shifting to a defined contribution for employee retirement accounts, rather than defined benefits.

Timothy Herbst, the former first selectman of Trumbull, said ending pensions for elected officials and a shift away from pensions for new employees is something he could bring to state government. Herbst said he would refuse a state pension if elected.

“Let me be very straight with you. We need to eliminate the current pension system as it exists,” Boughton said at a debate last month. “We have almost 1,500 people out there who recive pensions of over $100,000 and one pensioner that gets over $300,000. Something is grossly wrong with the system.”

Steve Obsitnik said he would declare a state of fiscal emergency to attack the unfunded liability, which is routinely rated as either the worst or among the worst in the U.S. On Wednesday, he  questioned where pensions still exist outside government.

Stemerman has suggested that Connecticut could do what no state has achieved: Break its commitment to existing employees and retirees on the argument it cannot afford to pay their pensions.

No Republican candidate for governor addressed the AFL-CIO convention this year, and the labor federation, many individual unions, and the labor-funded Working Families Party all have endorsed Ned Lamont, a Democrat facing a primary challenge from Bridgeport Mayor Joseph P. Ganim.

He said unions should not be allowed to require state employees to pay union dues, but the U.S. Supreme Court already has ruled that unions can no longer collect “agency fees” from state employees who refuse to join the unions. He said he was promising to block unions from thwarting that decision.

Stemerman said he would seek a ban on state employee unions contributing to state campaigns, similar to the existing ban on state contractors. But unions’ political influence relies less on direct contributions to campaigns than its grass-roots organizing of its own members and independent expenditures it makes in support of friendly candidates.

Businesses can and do make the same independent expenditures.

Stemerman called for Connecticut to follow the majority of states is setting retiree benefits by statute, not collective bargaining. But he was vague on how he would change binding arbitration laws, one of labor’s greatest political victories.

House Speaker Joe Aresimowicz, D-Berlin, was called a symbol of labor’s power at the Capitol. Aresimowicz is a full-time employee of the public-sector union, AFSCME, as he’s been since before his election to the part-time General Assembly.

“The sad part about what he says is he shows the lack of knowledge about the legislative process and the state of Connecticut as a whole,” Aresimowicz said. “It has not been 40 years of Democratic control of the legislature. It is a great talking point they are trying to invent for this election.”

Aresimowicz said he is the first speaker to require that all labor contracts come before the House for a vote. He said he met with Stemerman to talk about issues facing the state.

“I thought we had a nice talk,” Aresimowicz said, “but he didn’t raise these issues.”