Disparaging the U.S. government and election system, with menacing warnings and occasionally occupation and weaponry, is in season.

Recent front pages juxtaposed headlines about the acquittal of Ammon Bundy et al. in their armed takeover of a federally owned wildlife refuge in Oregon, and about the increasing talk among Donald Trump supporters of “revolution” if Hillary Clinton should be elected. 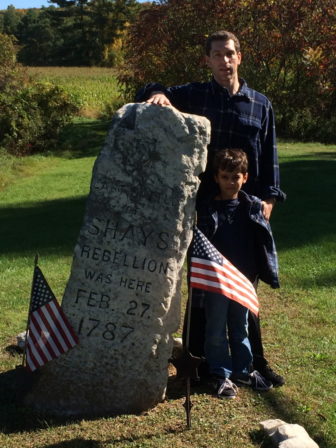 The writer and his son at the site of the final battle of Shays’ Rebellion in Massachusetts.

A former Republican congressman from Illinois said he would be “grabbing” his “musket” if Trump loses.

Such would-be rebels and gun zealots revive one reason the U.S. Constitution was created: to counter conflicts like Shays’ Rebellion, when Massachusetts farmers burdened by debt took up arms against the Commonwealth in 1786–87.

A sturdier Constitution replaced the Articles of Confederation.  That Constitution included a Second Amendment beginning: “A well regulated Militia, being necessary to the security of a free State….”

Today’s self-appointed defenders  — and selective interpreters —  of the Constitution should be reminded of this history.  Plotting against government institutions isn’t heroic.  It’s dangerous, potentially even treasonous.

In the 1790s, President George Washington led militiamen from four states in suppressing the Whiskey Rebels; then, militias were “well regulated,” and anti-tax protesters yielded.  The whiskey tax remained controversial but was eventually repealed through the democratic process, not armed resistance.

William deBuys cautions us: The Bundy clan’s efforts are aimed at “privatizing America’s public land.”  The Sagebrush Rebellion of recent decades was related, accompanied by radical opposition to federal environmental laws and extreme views about “sovereignty” and sometimes race.

Bundy and friends were acquitted of federal conspiracy and weapons charges.  Bundy, his brother, and their father still face other charges over actions in Oregon and Nevada.  Let us hope that justice will prevail.

Real patriotism is not paranoid about our nation’s founding documents or about the government they undergird.  Real patriots recognize that federal lands belong to all Americans (including Native Americans), and that failure to pay appropriate fees for use of those lands should not be excused.

Some citizens may believe it’s “smart” not to pay federal taxes or fees, not to heed our laws and Constitution.  Wrong.  Such conduct is un-American.  Armed insurrection, or incitement to that end, is no joke.  Domestic terrorism is still terrorism.

The Bundy family, and those of their ilk who see evil everywhere in government and imagine that a national election can somehow be “rigged” amid America’s free press — with states mostly ruled, in 2016, by Republicans more prone to gerrymandering and limiting voting rights than to fraud— are not only misinformed.

Such fanatics evoke episodes in our history, from Shays’ and the Whiskey Rebellion to the secession of the Confederacy over slavery and McCarthy-era anti-Communist mania.  Each time, the United States endured internal threats before emerging stronger.  May it do so again.

Josiah H. Brown lives in New Haven.  His prior viewpoints have addressed topics from demography and the electorate, history and civics to guns and security, refugees and immigration, interfaith relations, and holidays of various cultures. Twitter: @JosiahBrownCT