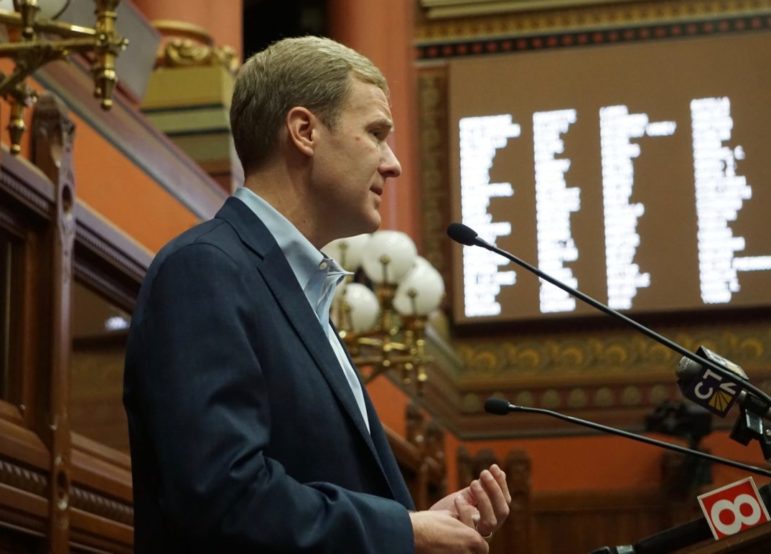 Matt Ritter after the House Democrats endorsed him as speaker.

In politics, power is golden. Indeed, power, not riches, is the coin of the political realm. In Connecticut, the Ritters, a power family, are the closest we have come to political royalty.

“The Ritters,” Keating notes in the lead to his story, “a Hartford family whose public service spans more than five decades, have arrived at a level of political prominence and influence unseen in recent Connecticut political history.

“The family has sent four members — a grandfather, two sons, and a grandson — to the state Capitol as Democratic representatives in the state legislature. Ritter family members now control powerful positions in the General Assembly, state Supreme Court and among special-interest lobbyists.”

Ritter and his counterpart in the state Senate, President Pro Tem Martin Looney, may, if he wishes, rule the roost without Republican support in the House or Senate. This was former Gov. Dannel Malloy’s preference, but Malloy’s heavy hand took a toll on his popularity. And when he threw in the gubernatorial towel at the end of his second term and accepted a position as Chancellor of the University of Maine system, Malloy’s popularity was a burning wreck.

Democrat numbers in the General Assembly – a majority of 98-63 in the House and 24-12 in the Senate following the 2020 elections — now allow the party to run roughshod over Republican sensibilities. Democrats, it had not been noticed by media savants in Connecticut, triumphed over Republicans by means of a magician’s trick; they ran against the President Donald Trump, who was not on the ballot in 2018 and who in 2020 was responsible for none of the shutdown regulations imposed by the Democrat governor and the Democrat legislature.

However, the sticking point in Connecticut are the progressive cats and, difficult as it may be to accept, some journalists  in Connecticut’s left of center media afflicted with an institutional memory who may not be willing to accept without modest resistance the continuing deterioration of the state’s economy in the post-Coronavirus era.

Ritter himself, a man of the House, may not be willing to sell his family’s long service on behalf of Connecticut for a mess of progressive-union pottage – which means he may be more willing than Arsimowicz or Looney, a thoroughgoing progressive, to make common cause with Republicans on matters that promote the prosperity of his state and the honor of the General Assembly.

In days gone by, when Ritter’s grandfather, George Ritter, was serving on the Hartford City Council, thereafter “spending 12 years at the legislature starting in 1969,” as the Courant puts it, such solicitude for the honor and prosperity of the state was brashly called patriotic. And the state patriotism that burned in the heart of the grandfather may, as sometimes happens, still light the darkness enshrouding the grandson.

Why should raw politics, the pursuit of power for power’s sake, always be the victor in political battles? Honor in politics — a genuine love and solicitude for the state of Connecticut as such — is more than half the battle that must daily be fought. It is the whole battle, always and everywhere; for politics without honor, a foresight that sees beyond battles of the moment, is tyranny writ large or small.

The honor of the House demands that the House should convene as usual and, as usual, do the public’s business. The legislature, House and Senate together, a co-equal branch of government along with the chief executive and the judiciary, represents the voice of the people, and that voice should be heard loudly above the clamor of partisan divisions. The General Assembly must not operate longer as a coronavirus victim, metaphorically afraid of its own shadow. The welfare of Connecticut depends upon the courage and patriotism of members of the state legislature, and this body cannot function properly as an agency that rents its constitutional prerogatives to governors or committee chairmen or union representatives.

To be a representative body, the House over which Ritter will preside must first be, and Ritter’s first and most difficult duty will be to restore the republican (small “r”) character of the House. Lincoln said rightly “a house divided against itself cannot stand.” But an Outhouse — simply an instrument of power politics — pretending to be a House should not be permitted to stand at all.

Donald Pesci lives in Vernon and is the writer of the Red Notes from a Blue State blog.