Washington – The parents of two children who lost their lives in the Sandy Hook school shooting told President Donald Trump the nation does not need to arm teachers, but should prevent mass shootings by training teachers to respond when a child displays certain signs of trouble.

Barden and Nicole Hockley, who lost her son Dylan in the shooting and also helped found Sandy Hook Promise after the tragedy, were guests at Trump’s “listening session” Wednesday, an emotional event that also featured students and parents affected by the Parkland school shooting and other tragedies, like the Columbine, Colo., massacre. 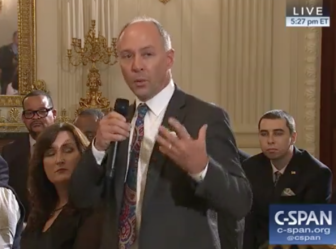 Accompanied by Education Secretary Betsy DeVos and Vice President Mike Pence, Trump asked for ideas. Pence said governors from all 50 states will come to the White House next week to discuss solutions.

But Trump said he is going to start with a few “very strong” steps,  including a push for “very strong background checks” of prospective gun buyers and an increased focus on mental health. The president appeared frustrated over limited options to hospitalize people who exhibit warning signs, saying there once were more mental institutions.

Trump also said he is looking at raising age limits for buying assault weapons, an idea welcomed by some at the listening session.

Trump asked the participants at the listening session – and received a mixed response – about the idea of  arming school personnel to confront a shooter and perhaps discourage attacks on schools.

“This would be obviously only for people who were very adept at handling a gun, and it would be, it’s called concealed carry, where a teacher would have a concealed gun on them. They’d go for special training and they would be there, and you would no longer have a gun-free zone,” Trump said. “Gun-free zone to a maniac — because they’re all cowards — a gun-free zone is ‘let’s go in and let’s attack because bullets aren’t coming back at us.’”

Hockley said arming teachers or other school staff “is not personally something I support.” She also said mentally ill people, as a whole, pose less of a threat to others than those in the general population.

She said the best way to address the issue of school shootings is to train school personnel for early signs of trouble and “find out what’s going on with a child and intervene.”

Barden drew applause from many in the room when he told Trump “schoolteachers have enough responsibilities right now,” and are not emotionally equipped “to use lethal force to take a life.”

But others supported arming school personnel and putting more security into the nation’s schools, including Andrew Pollack, who lost his daughter Meadow, in last week’s shooting at a high school in Parkland, Fla., that claimed 17 lives. 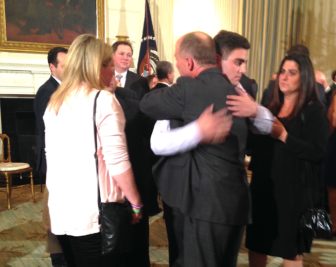 “It should have been one school shooting and we should have fixed it,” Pollack said. “I’m pissed. Because my daughter — I’m not going to see again. She is not here. She is in North Lauderdale, whatever it is, in King David Cemetery. That is where I go to see my kid now.”

Hunter Pollack, one of Meadow’s brothers, said, “We need more security, we need more firearms on campus, we need better background checks, and we need to study more on mental health.”

After the event, Barden said he came to press the need for ways to prevent future violence.

“I think we can make a difference,” he said. “I don’t’ care what the administration is.”

Trump is a strong supporter of gun rights. But after the Parkland shooting, he has indicated he is willing to break with the National Rifle Association on some things — including age restrictions for buying assault-type weapons.

“Whether we are Republican or Democrat, we must now focus on strengthening Background Checks!,” Trump tweeted Tuesday.

But it’s not clear what the president is talking about — whether he backs a modest, NRA-approved measure sponsored by Sens. Chris Murphy, D-Conn., and John Cornyn, R-Texas, aimed at inducing states to report more records to the National Instant Criminal Background Check system, or something more comprehensive.

Trump has also asked Attorney General Jeff Sessions to devise a rule that would outlaw “bump stocks,” a device that allowed the shooter in the Las Vegas massacre in November to increase the firing rate of his rifle.

On Wednesday Gov. Dannel Malloy wrote Sessions, urging him to use the governor’s proposed state ban on bump stocks and other devices that enhance a weapon’s lethalness.

“As you undertake this effort, it is critically important that your regulations be drafted in a comprehensive and inclusive manner in order to increase their effectiveness for improving public safety and saving lives,” Malloy wrote.  “To that end, I’d like to provide you with an overview of current efforts taking place in Connecticut, and detail the specific methods our state is exploring to create an effective ban on these devices, which we know are cheap, deadly, and completely unnecessary in our society.”

Send us the children