Jan Hochadel Speaks at October, 2019 Meeting of the Board of Directors for the Partnership for Connecticut

As two members of the board of the dissolved Partnership for Connecticut, we wanted to express our thoughts on the recent article, “Murphy says Dalio partnership showed the risk of trading influence for philanthropy.” We did not accept our positions on the board lightly. 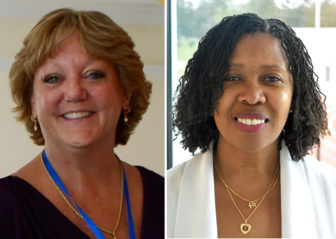 At AFT Connecticut, the pros and cons were debated, and the final decision –- made by the PreK-12 (education) Council –- was based on two things – Barbara Dalio’s history with members over the past six years, and the inequity in educational funding in Connecticut.

And for Sheena, who is a member of the Connecticut Education Association (CEA), due to her interactions with Barbara, she joined the board because she knew it would be “kid focused” and a place where an educator’s opinion mattered.

We agree with Sen. Chris Murphy on the need to raise taxes in order to more fully and equitably fund public education. However, that is the work of the Connecticut General Assembly. The current legislature too often refuses to even bring the issue of fuller and fairer funding to a vote. The unwillingness of lawmakers to address educational funding has left us with the option of accepting philanthropic funding or nothing.

The impression left by the article is that philanthropy should be avoided in education. Given the failure of the Connecticut General Assembly to fully fund education or promote a more progressive tax structure, should we refuse Barbara’s willingness to try to fill funding needs?

The problems in New Jersey with Mark Zuckerberg‘s “gift” are described in the book The Prize. We took those lessons seriously, and everyone on The Partnership’s board was given a copy of the book to read so we would not make the same mistakes. The goals and processes we used were as different from what is described in The Prize as Barbara Dalio is different from Mark Zuckerberg.

We have known and worked alongside Barbara for many years to support educators and help students across Connecticut. We have toured classrooms and public schools together. We have spent countless hours talking with Barbara about public education and ways to help students, especially those young people who most need and deserve our support. We know her goals and intentions, and we stand in solidarity with Barbara seeking to improve outcomes for Connecticut’s young people.

That’s why it bothers us when people mischaracterize Barbara’s approach and goals without being informed; these harmful mistruths are distractions when we must focus on working together to improve our public education system.

In the recent article, it was suggested that Barbara, her husband, and her family’s foundation aim to use their wealth to have an outsized influence in public education without listening to anyone. For those of us who have worked with her, who believe in the value of public education for everyone, we can say emphatically that nothing could be further from the truth, and we seek to respectfully address this and put it in proper context.

Barbara listens to everyone in the education community with a big heart and open mind. Not once – let us repeat, not once – has Barbara told us what do to with her generous philanthropic dollars.

As educators, we have learned to be suspicious when people with no educational background insist their money be tied to their personal initiatives. Barbara, conversely, asks questions, respects our experience and expertise, and is willing to trust us to be responsible with her donations. We welcome that trust and confidence.

Barbara’s collaborative approach has led to wonderful results for Connecticut’s educators and students. Here are just a few of the ways that Barbara has helped over the last few years:

There is a great deal in what Sen.Murphy said with which we completely agree. We believe that philanthropy is the result of a broken system. The article stated that a billionaire’s opinion should be no more important than that of your poorest constituent. We agree, but the reality is with the current funding and taxation structure, both from Hartford and Washington, our poorest constituent has no chance to have the education that our richest constituent does.

Rather than take the money that our broken system saves the Dalios in taxes to buy one more yacht or one more home, as is usually the case, Barbara is using that money to help public school teachers educate their students.

We would love the opportunity to sit down with Sen. Murphy to discuss how we as a state and as a country can provide every student the education they need and deserve. Barbara is not the problem; she is trying to help solve the problems that our politics are creating.

Jan Hochadel serves as president of AFT Connecticut, a labor federation whose 30,000 union members include certified teachers and education support staff in 31 districts across the state. Sheena Graham is a performing arts and choir teacher at Bridgeport’s Warren Harding High School and was honored as the 2019 “Connecticut Teacher of the Year.”