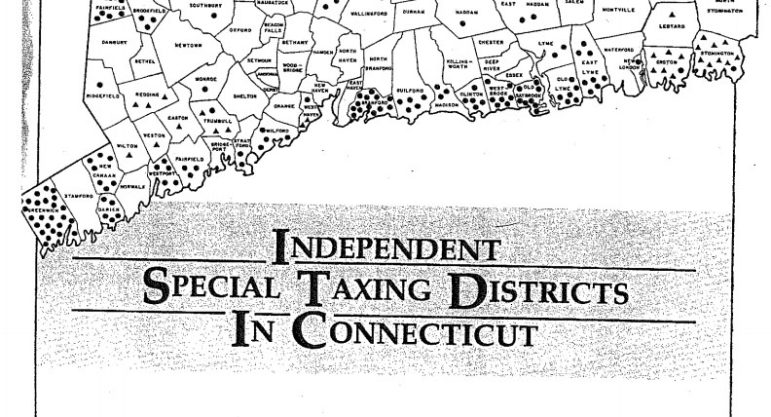 From its earliest days, Connecticut included as part of its very fabric the predominance of the geopolitical unit of the “town” within the state organism. Of the eleven Fundamental Orders, nine place authority for delivering the will of Divine Providence in the towns. The Eighth such Order invokes the supremacy of the towns no fewer than five times.

The state’s constitution of 1818 ensured that political authority was not devolved away from the people by providing one year terms of office for the governor, lieutenant governor, all other constitutional officers, as well as members of the General Assembly. This necessarily kept state level government weak and beholden to the will of the towns. It continued the Jeffersonian principle that local governments enhance democratic practices.

The 1965 constitution included, among other things, a feature authorizing passage of a Home Rule Act, which the General Assembly had already passed eight years earlier. In Connecticut, Home Rule enables the legislature to authorize towns to have a broad range of powers, within the scope of each town’s charter. A significant source of such authority was promulgated in Chapter 104 of the General Statutes and provides towns authority to establish special districts addressing such concerns such as water, sewer, fire, ports, beaches, lighting, and municipal improvements.

These special taxing districts provide efficiency and fairness in the administration of municipalities, particularly those towns with localized assets such as beaches, bustling business districts, or condominium complexes. Establishment of a special district lifts administrative responsibility off the general town government and allocates the costs of delivery of the associated services to those persons who will most benefit from them. As well, management of the district is placed in the hands of an elected board whose members’ interests are geographically tied to the district. By use of the special district device, the town’s overall real property tax base is not burdened with paying for an asset most of the residents make little or no use of. As well, the asset around which the district is formed is assured more consistent management attention than if it were relegated to an agenda item for a municipal commission whose brief includes all similarly classified town assets.

Because of their functional autonomy from the government of the town in which they are established and their authority to promulgate rules for and collect taxes from residents within the district, special taxing districts exist as their own limited governments.

The Census Bureau has, every five years since 1957, continuously maintained and updated a Government Master Address File using the Government Units Survey. The GMAF identifies every special district in the country. These data, not incidentally, are not collected or maintained by the State of Connecticut.  Special districts are independent, sub-municipal government units created for a limited, specific purpose and, every year, new districts are created and existing ones end.

Records reflect that the first such special district in Connecticut, the Borough of Bridgeport (then part of the Town of Stratford), was established in 1800, followed a year later by establishment of the Borough of Stonington. From 1962 through 1997, the number of sub-municipal governments in Connecticut increased over 46%. From 2007 through 2017 that growth reversed direction and the number of sub-municipal governments shrank in our state while growing nationwide.

Connecticut experienced the eighth largest reduction in the country, by percent, of local governmental units for the period 2007-2017, with a loss of 24 special districts.

For the more recent period of 2012-2017, the special districts lost in Connecticut were principally associated with Fire Protection (decrease of seven), Parks and Recreation (decrease of three), Water Supply (decrease of two), Highways and Housing and Community Development (each with a decrease of one).

Perhaps key to explaining the sustained downward trend in the number of Connecticut sub-municipal governments is the operative language in the statute requiring the districts to be “wholly within a town and having the power to make appropriations or to levy taxes.”

Around 2007, taxes began attracting populist opposition. Anti-government sentiment gained momentum in December of 2007 when Representative Ron Paul launched his presidential campaign on a platform of opposition to taxes and was further accelerated in 2008 when the subprime mortgage crisis that had begun in 2006 resulted in a stock market crash and a recession. The resulting sentiment served as a brake, among some voters, on the establishment of anything that looked like additional government or another layer of taxes.

The downward pressure on sub-municipal government was not nationwide, though.

Only 20 states lost local governmental entities throughout the period 2007-2012 and also went on to lose more for an additional five years. It is interesting to note that, as among the states comprising those losing the ten largest amounts (by percent) of local government units, all of them, excepting Connecticut and Rhode Island, are among the most ideologically conservative states.

As a whole, the country gained 599 sub-municipal government units during the 2007-2017 period, or about .7 percent. Connecticut’s loss of 3.7% of its units, then, represents a significant departure from the national trend.

Our towns rely on own-source revenue for about 88 percent of their budgets. The shift away from the deployment of sub-municipal governments puts upward pressure on town wide mill rates as the under utilization of more efficient mechanisms for distribution of government services obliges towns to rely on general purpose revenue sources. Towns should take a fresh look at how they can improve effectiveness of delivery of government services, and more appropriately allocate incidences of local tax through the use of special district government entities.

Dan Smolnik is a tax attorney and a member of the Hamden Economic Development Commission. The views expressed are his own.