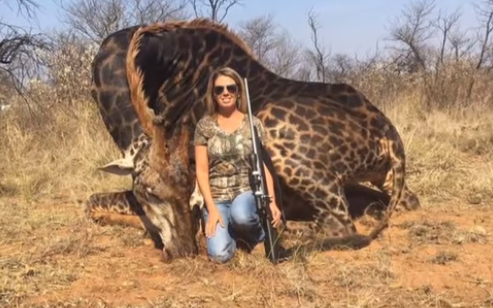 Connecticut does not have clean hands when it comes to pushing Africa’s Big 5—elephants, lions, leopards, rhinos and giraffes—closer to extinction. The state is supplying customers to the grave, immoral trophy hunting industry.

The Connecticut communities that have been issued the most permits for trophy hunting are: Greenwich, North Haven, Norwalk, Berlin, Stamford, Westport, Weston, Easton, Southington and Middletown.

As soon as you put a price tag on these threatened, vulnerable and endangered animals, you send a mixed message about whether they need to be protected at all, and that’s detrimental to actual conservation. Shooting animals full of bullets does not increase their population or expand their habitat. Trophy hunters are just poachers with permits.

However, Connecticut is one step closer to banning the importation of the trophies of Africa’s Big 5 during the 2019 legislative session because the Environment Committee has approved and sent to the Senate floor SB20, which would ban the importation, sale, possession and transportation of Africa’s Big 5 and their body parts in Connecticut. The bipartisan bill is co-sponsored by Senate Majority Leader Bob Duff and state Rep. Brenda Kupchick and drafted by Friends of Animals.

The importance of SB20 is that it recognizes legal trophy hunting as one of the main reasons that Africa’s Big Five face extinction. SB20 sends a strong message that trophy hunting needs to be stopped, as these species are already fighting for their lives because of poaching and habitat loss.

It’s more crucial than ever for states to take action because when it comes to trophy hunting, federal law is not protective enough.

On Dec. 21, 2015, U.S. Fish and Wildlife Service listed two lion subspecies as threatened and endangered under the Endangered Species Act. But overall the listing continues to promote trophy hunting because it allows for the importation of the body parts of the sport-hunted threatened lion species.

Additionally, while the July 6, 2016 near-total ban on commercial trade in African elephant ivory that went into effect in the U.S. looks good on paper, it still allows for two sport-hunted elephant trophies per hunter per year.

The only difference between poachers and trophy hunters is wealth and public perception. While poachers are willing to slaughter magnificent animals to make a buck, well-heeled vainglorious trophy hunters spend lots of money to hunt for bragging rights and prizes.

The newest data reveals that trophy hunting is economically useless. While the Safari Club boasts that revenues from hunting generate $200 million annually in remote areas of Africa, most of the money goes to trophy hunting operators/outfitters and government agencies, many of which are corrupt. The most recent study reveals that a measly 3 percent of expenditures actually goes back to African communities.

So, if the reason for trophy hunting is “conservation,” but it is not contributing to conservation, it’s time for Connecticut to stop supporting a useless industry.

Priscilla Feral is President of Darien-based Friends of Animals.