Stuck in a Stop & Shop traffic jam of seniors

The first day of seniors-only hours produced pre-dawn lines like this one outside Stop & Shop stores.

Sales boomed Thursday morning as Stop & Shop began seniors-only hours. The results of the new policy for customers like me, there to take advantage of hours (6 a.m. to 7:30 a.m.) set aside for those over 60 –-  a coronavirus version of the Early Bird Special –- were not so healthy.

The Hamden store was overrun with customers, the aisles were jammed with traffic, the register lines ran forever, the manager hustled from checkout clerk to checkout clerk trying to speed the cashiering process while seniors queued up as they did in the old days –  say, a month ago –  before we knew we were especially at risk for a pandemic.

Indeed, for a brief period today Hamden became the Clearwater Beach of social distancing. Among the most vulnerable age group, there was almost none.

When pressed by a customer to do something to alleviate the waiting period, the manager replied out of frustration, “I don’t have any more cashiers.”

When I asked the customer service representative behind the counter, “It doesn’t look like a healthy situation, does it?” she responded, “That’s probably right.”

I spent, in all, about 20 minutes in the frenzy mostly trying not to play bumper cars as at first I loaded up on the onion special (two bags for the price of one, $3.99), some avocados, bananas, cheeses and the like, as I thought of maneuvering to the meat counter to buy packages we could freeze back in our New Haven basement.

I dodged men and women wearing masks, some of them bent over their carts.

I thought, “This can’t be a good thing.”

At that point, I received a text from my wife, Suzanne, who had awakened and realized I had gone off on this adventure after being ambivalent about it last night. (I had watched one of the many medical experts on cable news who warned that that seniors should not be tempted by such practices and instead ask juniors to shop for them).

Suzanne listed things we were out of: Mrs. Meyers dishwasher (basil scent), small Glad bags, red kidney beans, cornmeal (“next to the oatmeal,” she wrote, helpfully), chicken breasts with the bone in.

When I thought too of stocking up on frozen vegetables, memories of childhood ran through my head, though it was only on special occasions when my mother offered Bird’s Eye rather than canned asparagus and spinach.

But something struck me and stopped me. There was a madness going on. Carts piled over the top, shoppers seemingly desperate, perhaps worried that a food shortage or a shelter-in-place order would deprive us of proper sustenance. The federal government, mostly through its highly regarded medical practitioners, Dr. Trump and Dr. Pence, had assured us this wouldn’t be the case, but some of us have come to believe that it isn’t always possible to trust what these two experts say.

I texted Suzanne and reported on my observations. She wrote back, “If it’s not worth it, come home.”

My first thought was to leave my cart and run. But that, too, would be wrong, and I went around and put back all of my purchases in their original places, though I knew that if my hands carried the virus, someone might pick up, say, the Cabot Seriously Sharp Cheddar, and later make a tuna melt with it, not knowing that I’d fingered the thing.

And then I ran. A shopper heading from the overflowing parking lot to the store as I headed out –  and warned by me not to go in –  replied, “It’ll only get worse later, but thanks,” as she pushed an empty cart toward the entrance.

The Stop & Shop corporation, to its credit, tried to come up with a plan that would avoid situations such as this morning’s boondoggle. Wednesday’s Boston Globe quoted a corporate spokesperson on why the new policy is in force every day instead of special days of the week, say Tuesday, Wednesday and Thursday. If the latter were the case, the spokesperson said, “This could result in large crowds, the very situation we are looking to prevent as it will make it more difficult for customers to practice social distancing.” 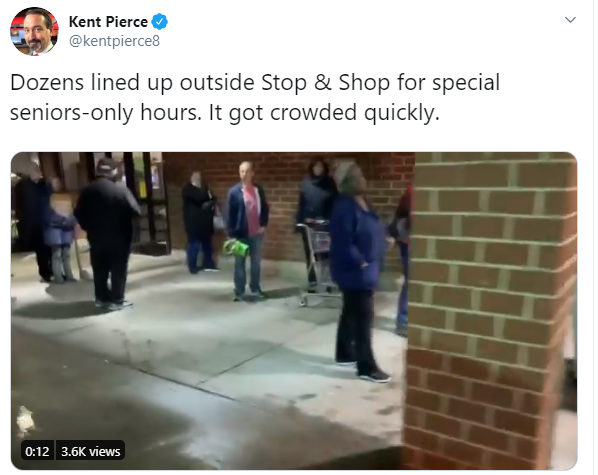 Another Stop & Shop official told the Washington Post this week: “The company doesn’t anticipate space between customers as being an issue, considering the size of most stores.”

But we are now in a period not only of uncertainty but of widespread danger and fear, and as a result the company couldn’t prevent what it feared.

My fellow shoppers had seen a lot of fear and loathing in their lives. Some, older than I (my permanent record goes back only to 1943), had lived through food and gasoline rationing, and the terror of a world war. They had grown up in the era of the polio epidemic, and we can all recall easily the major traumas that followed: the Vietnam War, riots in the cities, the assassinations of inspiring leaders.

And a little more than a month from now, those of us who were on the Kent State campus that spring (I was there to lecture) will mark a half century since the killing of four students and the wounding of 19 others by National Guard troops. Horrible times, all.

Do we build up an immunity to fear and panic as we get older?

I used to think so. But Thursday morning, in city of Hamden, the evidence didn’t support my thesis.

I drove back home, imagining a future without kidney beans, cornmeal, Cabot Seriously Sharp cheddar. Or perhaps I could come back during the usual Early Bird Special time, say about 4:30 p.m., and jostle with the millennials in the toilet paper aisle.

This commentary was first published by The New Haven Independent on Thursday, March 19.