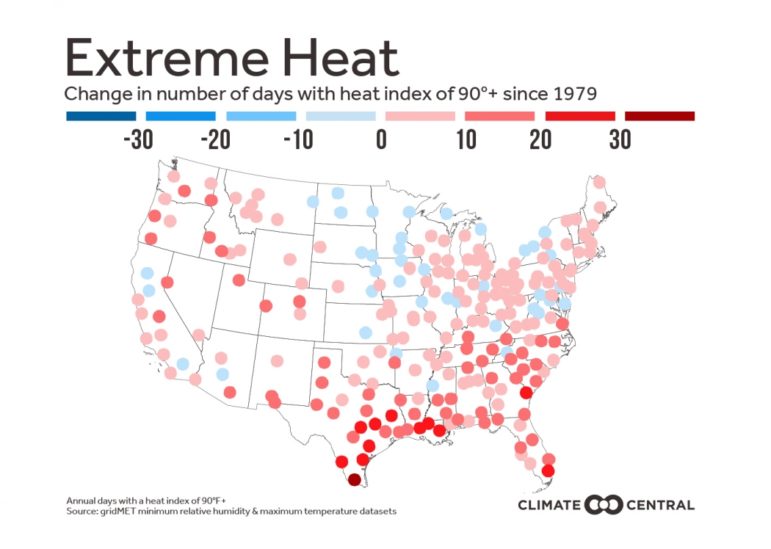 Extreme heat days per year are increasing across the United States.

“Outdoor sports can become risky in extreme heat” was the recent warning from the science-based organization Climate Central. This warning comes at a time when schools are reopening and students are heading back to the playing fields.

The Centers for Disease Control and Prevention say heat illness is a leading cause of sudden death among high school athletes. Since 1995, 64 football players have died from heat stroke. Of these, 47 were in high school, 13 in college, two professional, and two organized youth. In 90% of these cases, the fatal incidents occurred during practice.

These staggering statistics should serve as a warning to all school athletes playing in the summer heat, especially those playing on synthetic turf fields, which get much hotter than grass fields.

Schools reopen in late August when the temperatures may be very hot. Many schools and colleges have installed synthetic turf fields. Because it was known that synthetic turf fields gets extremely hot, these fields have been studied for their ability to retain heat. As early as 2007, scientists at Columbia University analyzed satellite thermal images of New York City, and concluded that conditions on synthetic turf fields are as much as 60 degrees hotter than natural grass fields.

In fact, synthetic fields get almost as hot in the sun as a tar rooftop, according to Stuart Gaffin, an atmospheric scientist at the Center for Climate Systems Research at Columbia. Gaffin found the temperatures above artificial turf fields measured at 140 to 160 degrees Fahrenheit, creating what he described as “heat islands.”

Why do grass fields stay cooler that synthetic turf fields? Gaffin found “the answer is in the evaporation of soil moisture through the grass leaves. Plants are nature’s ‘geniuses’ when it comes to evaporating water to stay cool in the sunlight. Plants need sunlight for photosynthesis, so they have perfected mechanisms of evaporation to avoid burning up.”

Extreme heat is intensifying with climate change, and even small increases in average temperatures can have big impacts on extremes. Our most recent decade was the warmest in the United States since government record keeping began in 1895.

What happens to athletes exercising in extreme heat? Body heat production rises during strenuous exercise, compared with when you are at rest. During intense exercise, the body depends on the evaporation of sweat to stay within healthy heat limits. On high humidity days, sweat does not evaporate easily, so the risk increases for heat-related illnesses such as heat exhaustion, heat cramps, and even heat stroke.

For more than a decade, Environment and Human Health Inc. has warned about the dangers of synthetic turf fields, recommending grass fields because of the lesser risk to health. The heat component of synthetic turf fields is just one of their dangers. We hope that schools, coaches, parents and all those involved with school sports will be aware of how hot these fields get, and take prudent steps to protect those who use them.

Nancy Alderman is president of Environment and Human Health Inc. in North Haven.