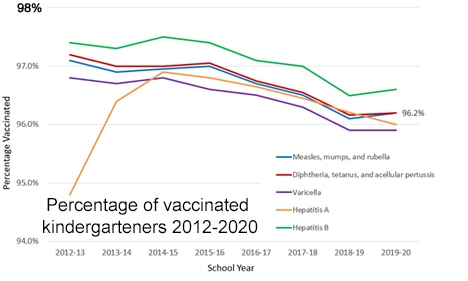 Last week, the Connecticut House of Representatives advanced legislation to eliminate non-medical exemptions from school-entry immunizations, a timely and important step towards protecting our children and families from vaccine-preventable illnesses. The Senate should move decisively to do the same.

Our professional society, the American College of Physicians (ACP), established national policy in 2015 recommending that vaccine medical exemptions be the only type allowed under state laws. High immunization rates are necessary to safeguard infants and children for whom vaccines may be truly unsafe, such as those with an allergy to a vaccine component or with a primary or acquired immune disorder, for example related to cancer treatment. These children did not choose their illness or condition; sending them to school with voluntarily unvaccinated students risks exposing them to a life-threatening, vaccine-preventable illness.

It’s not only children with cancer and immune disorders who are at risk when healthy children forego vaccination. In 2019, New York City suffered an outbreak of measles, one of the most contagious vaccine-preventable illnesses. Many of the families affected in the outbreak claimed religious exemptions to vaccination. Of the 649 infected children, teenagers, and adults, 1 in 8 had been previously vaccinated against measles. These were primarily young children who were not fully vaccinated (including 34 children under 5 years old) and older people who had lost some of the protective effects of earlier vaccination —groups that rely on herd immunity to remain safe from deadly contagious diseases.

Public health and safety measures are based on the age-old idea of a social contract, in which we sacrifice some freedoms for the greater benefit of society. Examples of this are all around us, from prohibitions on driving while intoxicated to mandated security screening at airports. These measures were not devised for the purpose of limiting our freedoms —they were reactions to tragedies. The decline in school-entry vaccination rates leaves the door open too widely for a tragic outbreak of a vaccine-preventable illness in our state.

Connecticut granted religious exemptions from vaccination for 2.3% of new kindergarten and 1.5% of new seventh grade students for the 2019-2020 school year, totaling 1.9% of so-called “new school enterers.” This is a greater than six-fold increase in students claiming religious exemptions since the state began distinguishing exemption types in 2003. Over the same time frame, by contrast, medical exemptions have stayed flat at 0.2%. The results of this increase are predictable and worrisome: overall measles, mumps, and rubella (MMR) vaccination rates have fallen below 95% —a threshold recognized to be critical for outbreak prevention— in more than 130 Connecticut schools, with a steady decline observed over the last decade.

To some degree, vaccines are a victim of their own success: when people no longer see vaccine-preventable illnesses, they question the need for widespread immunization. Older Americans remember the ravages of polio and the mass oral poliovirus vaccine campaign, beginning in 1963, which finally eradicated the disease in this country. Mortality from measles, which the CDC estimates killed 2.6 million per year worldwide in the 1980s, was reduced by more than 95% by 2017 thanks to improved global immunization practices. In 2019, however, 1,282 cases of measles were confirmed in 31 states —the greatest number of cases reported in the United States since 1992. The fear of vaccine-preventable illnesses for many in this country has been replaced by unfounded fears about vaccines as a cause of autism or as a significant source of toxic compounds.

In reality, lasting adverse effects from vaccines (so-called “vaccine injuries”) are exceptionally rare. According to data from the National Vaccine Injury Compensation Program—which was established as a no-fault alternative to the traditional tort system after lawsuits against clinicians and vaccine manufacturers threatened to lead to vaccine shortages and reduced vaccination rates— more than 3.7 billion vaccines were administered in the United States between 2006 and 2018, with fewer than 1,600 vaccine injuries identified: a rate of about 1 per 2.4 million vaccines. Misinformation about vaccine safety and misattribution of medical problems following vaccination —some well-intentioned, some malicious— run rampant across social media and the internet, even though decades of research have consistently proven vaccines to be safe and effective.

In 2019, our neighbors in New York and Maine enacted laws removing non-medical vaccine exemptions after observing the remarkable protective effect of such policy in other states. In Mississippi, where 99.6% of children entering kindergarten in 2018 had all required immunizations, there has not been a documented case of measles since 1992. Mississippi’s religious exemption was struck down by its Supreme Court in 1979 after finding that even for vaccinated children, the “hazard of associating in school” with students claiming religious exemption unduly placed the beliefs of a few above the general public welfare.  West Virginia, which has never allowed non-medical exemptions, has not had a measles outbreak in more than 25 years.

As physicians, it is our duty to advocate for and protect the health, human rights, and well-being of not only our individual patients, but also the broader public. We hope that our voices —and our trust in the well-established science supporting vaccine safety and efficacy— will both reassure vaccine-hesitant parents and also instill in our state senators the confidence they need to take bold action: stand with your colleagues in the House in placing the needs of infants, the elderly, and people with immune disorders above the objections of a vocal few. Eliminate non-medical vaccine exemptions in 2021.