The ‘gas bridge:’ Why Connecticut’s green future remains largely out of reach 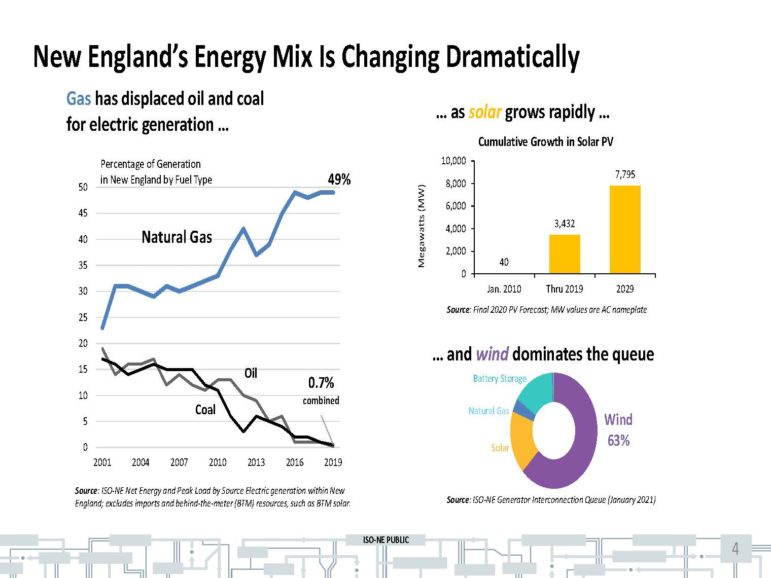 A slide from an ISO-NE January 2021 presentation showing how the different sources of energy in New England have changed.

The vision: Transitioning to renewable energy

Imagine a world in which all vehicles are electric; instead of going to the gas station for noxious fuel, you plug in your zero-emissions electric car into a charging station. City walkways are safer for bicycles and pedestrians, and the air your breathe no longer gives you asthma and cancer. In this clean energy world, the worst consequences of climate change are avoided, saving millions of lives and billions of dollars in property damages annually. To usher in this green future, Connecticut plans to transform its economy and energy sector. Towards this goal, the Governor’s Council on Climate Change has set a midterm target of 45% greenhouse gas reduction below 2001 levels by 2030.

Despite ambitious targets, Connecticut’s green future remains largely out of reach. Why? Lawmakers, the Department of Energy and Environmental Protection (DEEP), and utilities refuse to move away from natural gas, erroneously pegged as a bridge fuel. Gas is predominately composed of methane, a greenhouse gas 87-times stronger than carbon dioxide. For this reason, Connecticut has thus far failed at aggressively implementing clean energy. In 2019, renewables only accounted for 5% of electricity generation, nowhere near the 40% by 2030 target.

The reality: Stuck on the gas “bridge”

Gov. Ned Lamont has promised to deliver clean power and air to Connecticut residents. Executive Order No. 3 stipulates a zero-carbon energy grid by 2040. The language in Senate Bill 882, however, requires that electricity “supplied to electricity customers” meet this target, thereby failing to include the electricity generated by Connecticut. The state could theoretically reach the 100% supply goal with the 54 polluting fossil fuel plants still active – when there is no reason for them to be.

Renewable energy alternatives are becoming increasingly inexpensive. In the past decade, the cost of wind generation has fallen by 70% and solar photovoltaic by 90%. Lazard, a financial advisory and asset management firm, found that solar panels can deliver power to 650 homes for one hour at $31 to $111 a megawatt-hour, compared to natural gas’ $122 to $162 a megawatt-hour. The bottom line is: fossil gas is quickly becoming unprofitable. In ten years, existing gas-fired plants will be underused and new plants will be unnecessary. Fighting clean power, companies are rushing to construct new plants, locking in decades of dirty energy and dooming climate change efforts.

DEEP – tasked with fighting climate change and reducing emissions – is giving the permits to gas companies to keep on polluting. In December, DEEP approved a pipeline fueling the controversial Killingly Power Plant. Instead of protecting Connecticut’s water quality and environment, DEEP green-lighted a project disastrous for wetlands and endangered species. This permitting opposes the green energy future that Lamont and DEEP have committed to and is out of step with President Joe Biden’s national clean energy goals.

When prompted about newly approved gas plants, the governor and DEEP play the blame game, insisting that the state is constrained by the regional grid operator, ISO New England. On Sept. 3 , 2019, DEEP Commissioner Katie Dykes stated: “The Killingly Power Plant (…) is being built as a result of the ISO New England determining a reliability need for the whole New England region.” And yet, ISO maintains that states control projects within their borders. Dan Dolan, president of New England Power Generators Association, underscores that states have significant control over permits: “Certainly, the policies of a given state — whether it’s on de-carbonization, or local economic development, or jobs, or anything else — have a major impact on [permit denial].”

Connecticut’s reliance on natural gas is disproportionately felt by low-income communities and communities of color. These Environmental Justice Communities bear the brunt of environmental racism and climate change. Twenty three of the state’s largest fossil fuel plants are located in EJ communities, leading to increased asthma and respiratory disease, cancer, and cardiovascular disease. Asthma Capitals 2019 ranked New Haven and Hartford the 11th and 13th  asthma prone cities in the U.S., respectively. Fossil fuel expansion is therefore not only disastrous for climate change, but also for public health and justice. DEEP and Governor Lamont have stated a commitment to environmental equity, supporting the Transportation Climate Initiative that would provide funds for EJ communities and encourage community participation. Connecticut can’t continue supporting EJ with one policy and disregarding it with another.

The road ahead: Take action!

Regressive policies in Connecticut continue to encourage gas expansion today. The 2015 Pipeline Tax, for instance, allows the Public Utility Regulatory Authority (PURA)  to impose a tax on ratepayers to build new pipelines. Similarly, state law permits companies to collect ratepayer funds to convert customers to gas. In order to get off the “bridge” of natural gas and hold the state accountable, these laws must be repealed immediately. Connecticut can no longer promise divestment from fossil fuels and then green-light new gas plants.

We have to stay informed to ensure that DEEP is committed to our green energy future. The League of Conservation Voters Watchlist and the Sierra Club newsletter can help you remain up-to-date on legislation. Start by supporting House Bill 6551 which would give DEEP the authority to deny permits to polluting facilities in EJ communities, thereby reducing greenhouse gas emission levels.

There is no place for natural gas plants in the transition to the green economy. We have the opportunity to build a more equitable, healthier society powered by green energy; we just have to ensure that our actions match our rhetoric and bolster the science.

Sarah Backer is a student at Wesleyan University in Middletown.