The intersection of race, class and gender in America’s childcare system: The class edition

Fixing America’s broken childcare system is not just a matter of dollars, but also sense. 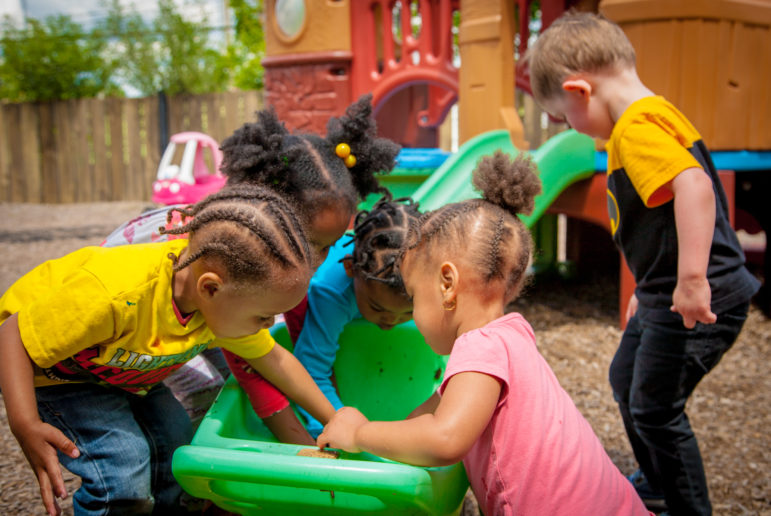 When Michelle Obama declared that she wanted to become “Mom in Chief,” she spoke to a sentiment shared by many women, i.e. the desire to be the primary caregiver of their young children in their early years. Not unexpectedly, Mrs. Obama was derided for making that choice, highlighting how society stands ready to indict women for any decision they make about their roles as mothers.

Ironically, a robust and stable childcare system, that was intuitive even to the needs of these “moms in chief,” would have been ready to respond to the needs of working families as they adapted to working from home during the Covid-19 pandemic. Childcare providers, long grappling with limited slots in an economically fragile industry, are reticent to accommodate families with inconsistent childcare needs.  So that “moms in chief” who want to avoid the social isolation of caring for young children alone or connect their young children to high quality learning experiences have little to no options. This reality is an outgrowth of America’s interminable war on race, class and gender.

When Nixon effectively ended America’s chance at a universal childcare system with his veto of the Comprehensive Child Development Act in 1971, he exploited the prevailing sentiment that children should be cared for by their mothers at home.  The support given to working mothers at the time reflected society’s disregard for these women’s economic circumstances.

With the expiration of the Lanham Act after World War II — which created America’s first and only universal childcare system — poor working class women were left to figure out child care and its ever escalating cost on their own.  The Head Start program established in 1965 attempted to address some of the barriers these women faced, and while this program yielded great results, it had the sad effect of casting the notion of a federally funded universal childcare system as welfare and socialism. Nixon and his ilk exploited this to great effect when the Comprehensive Child Development Act strived to expand the reach of the Head Start program to more families.

An “anti-welfare/anti-big government” movement aided by middle and upper middle class women, led to the defeat of the bill’s reiteration – the  Child and Families Act – in 1973. This left America’s childcare to devolve into the hodge-podge system that now exists.  As more women entered the workforce, little was done to alleviate the strain on the system and the emerging needs of these working families.  As childcare subsidies continued to focus on supporting low-income working women and families, middle and upper middle class working women now find themselves with the shoe on the other foot.

Worse still, no consideration is given to the “moms in chief” who are deemed not to have any childcare needs at all.  This reflects the pernicious nature of class warfare as the pendulum swings back and forth.  And as Covid-19 ravaged the long enfeebled childcare industry, millions of families, regardless of their socio-economic backgrounds, found themselves similarly situated when childcare facilities and schools closed, resulting in a dramatic exodus of women from the labor force.

Gov. Ned Lamont did not move the needle for many middle class families with his recent childcare proposal.  In fact he doubled down on the status quo.  For instance, Governor Lamont’s proposal increased the Care 4 Kids subsidy and effectively eliminated $5,000 of childcare cost for one of Hope’s parents who makes $40,000 annually with one child.  Another parent of two, making $55,000 with annual childcare cost of $20,000, received $0 in childcare relief and Connecticut’s “moms in chief,” interested in accessing high quality learning experiences for their children, will continue to bear the full cost of care regardless of their families’ income level.  This approach continues to pick winners and losers based on class and puts into stark relief that fixing America’s broken childcare system is not just a matter of dollars but also sense.

This was a regrettable miss for the governor, especially in light of his actions not only during the pandemic but also a month before.  In what has proven to be a prescient speech, the governor in his 2020 State of the State address characterized childcare as a necessary part of Connecticut’s economic engine and as critical a pathway to its revitalization as our roads and bridges.  And to thunderous applause, he announced the expansion of the Care 4 Kids program aimed at bolstering families as their income rose.  A month later Connecticut entered into a lockdown and the loss of childcare reversed the U.S. labor participation of women to 1988 levels.  The Governor’s current proposal not only missed the opportunity to broaden childcare access for Connecticut’s middle class families, but by targeting assistance only to women who plan to enter the workforce, continues to ignore the science of brain development and undercut his commitment to all of Connecticut’s children.

Our pathway forward must include a fully funded universal early care and education system that reflects the science of early brain development, supports families regardless of income and honors all families’ choices regardless of their childcare preferences.  By building an early care and education infrastructure that achieves all of these, we are guaranteeing that access to high quality learning experiences  will no longer be viewed through the prism of class, but rather in the same manner that we view our schools, museums and libraries, i.e. a necessary societal good.  Anything less disconnects us from our shared interest and stymies our path forward toward a more equitable system that works for all families.

Georgia Goldburn is the Director of the Hope Child Development Center/New Haven.