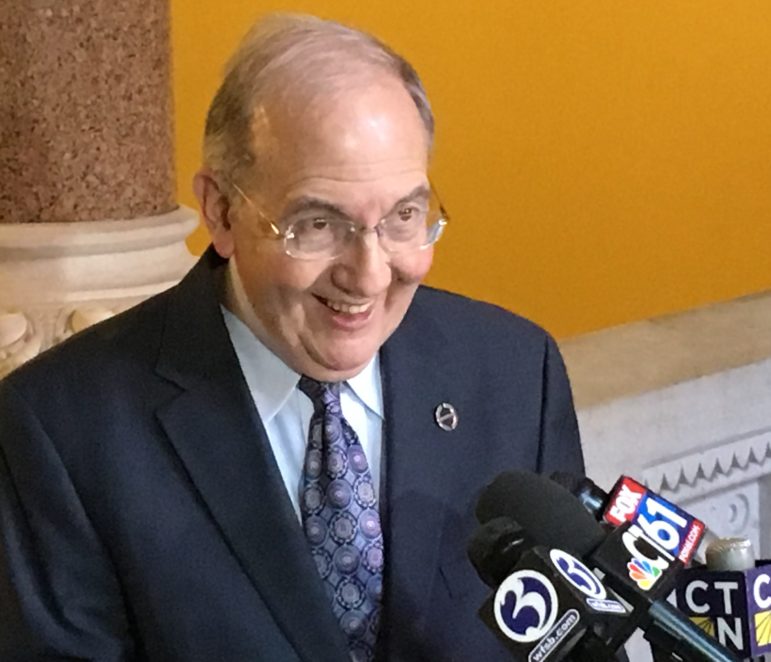 Martin Looney, for half a dozen years the President Pro Tem of the General Assembly’s state Senate, is fast becoming the Alexandria Ocasio-Cortez (AOC) of Connecticut.

The President Pro Tem of the Senate is the head of the Senate’s Democrat Caucus and a doorkeeper who allows and does not allow the business of the Senate to reach the floor, where bills are debated and decided by the full Senate, both Democrats and Republicans.

A few years ago, the Senate was split, about 50-50, between Democrats and Republicans and, for a brief shining moment, there was in that august small “d” democratic body a measure of bi-partisanship, very unusual for a political organ of government that had been controlled by Democrats for almost 30 years.

When the 2016 elections had concluded, the General Assembly saw an uptick in aggressive government, not at all business as usual, because both houses in the state legislature saw an inrush of progressive Democrats, relieving Democrat watch keepers in Connecticut’s’ General Assembly, Looney in the Senate and Democrat Speaker in the House Matt Ritter, of the necessity for magnanimous bi-partisanship. Except on one point – that Republicans must be kept in the cellar when important matters are being batted around on the legislative floor. Former Gov. Dannel Malloy was rather too much of a AAA personality to be tolerated for more than two terms in office.

“Government,” George Washington reminds us, “is force.” Political necessity may mitigate brutal force. But when, by means of superior numbers, the necessity for bi-partisanship disappears, government reverts to type. Numbers in politics always determine manners and, given the numbers in the General Assembly, there really is no reason why majority Democrats should not refuse to share decision making with minority Republicans.

And they don’t. This political template was previously deployed with some success by Malloy, not greatly loved by Republicans, but supinely tolerated by left leaning Democrats for whom bipartisanship is generally viewed as a certain route to political ruination. Such forceful Democrats – Looney is one of them – tolerate bipartisanship only on relatively unimportant matters. In a political structure in which superior numbers determine political hegemony, democratic government becomes rule by the superior party caucus — Looney’s caucus, a raucous group of piratical freebooters.

On April 15, Looney wrote for the Hearst papers a manifesto for progressives, “Equity must be at the heart of a CT tax reforms.”

“Equity,” always left undefined by the left, has become a progressive totem, and the Looney manifesto leans heavily upon it. As understood by opposing but flaccid Republicans, equity means everyone but the pigs in the political barnyard should be equal to everyone else. Needless to say, the leveling notion of equity – not at all on a par with “equality before the law” – does not apply to Republicans chained in the cellar of the General Assembly, nor are we to suppose that equity would be offended if Connecticut’s Supreme Court were, as occasionally happens, to assume legislative powers and rule wealth in Connecticut unconstitutional, thus allowing Looney to plunder the rich without unduly burdening the state’s shrinking middle class.

In his manifesto, Looney devotes himself, at considerable length, to justifying tax increases by wrapping them in purple cloaks of “fairness” and “equity.” Thus: “The central principle is simple: those who make more should contribute more.” The Looney doctrine exactly approximates the central doctrine of Karl Marx’s manifesto: “From each according to his means, to each according to his needs.” In the piratical imagination, the looting of merchant ships is fair and equitable. In a society in which all bow down to the god of equity, pirates are equal to merchants and bank robbers are equal to tellers.

“Not only is burdening Connecticut’s middle class unjust,” Looney wrote, “but it will also hinder our efforts to recover from the economic stresses that the pandemic has wrought… Reforming Connecticut’s tax policy is one way to begin addressing inequity and closing the racial wealth gap that has plagued Black and brown communities across our state for generations… One way to enhance fairness is to adjust taxes on capital gains since the wealthiest derive most of their income from capital gains rather than a weekly paycheck… Connecticut should also increase income tax rates on its highest income earners while remaining competitive with states in our region… At the same time, we must avoid funding new initiatives with regressive taxes or user fees which burden low- and moderate-income families while leaving the wealthiest relatively unscathed… Equity will be at the heart of our modernized state tax policy. Now is the time to act.”

Gov. Ned Lamont has said he would not sign a bill now in the hopper, backed by critical race theorists like State Sen. Gary Winfield and Looney, that would seek to provide equity through increases in corporate taxes and so-called progressive taxes aimed at shifting from Peter to Paul the assets of those millionaires in Connecticut who have not yet considered moving to less predatory states. The notion that business taxes are not regressive is a fable; all business taxes are passed along to consumers, and resulting cost increases fall most heavily on poor people. And the notion that the rich, by moving away from their progressive tormenters, do not deprive the state of necessary tax revenue generally passed along by progressives from rich Peter to poor Paul is a fable that never has paid future dividends.

Only Lamont stands between progressives in his party and a future collapse of Connecticut prosperity. When states fall, the bottom comes up on them very quickly. And Lamont, who has received high marks for his handling of the passing pandemic, is a very thin political reed.

Donald Pesci lives in Vernon and is the writer of the Red Notes from a Blue State blog.