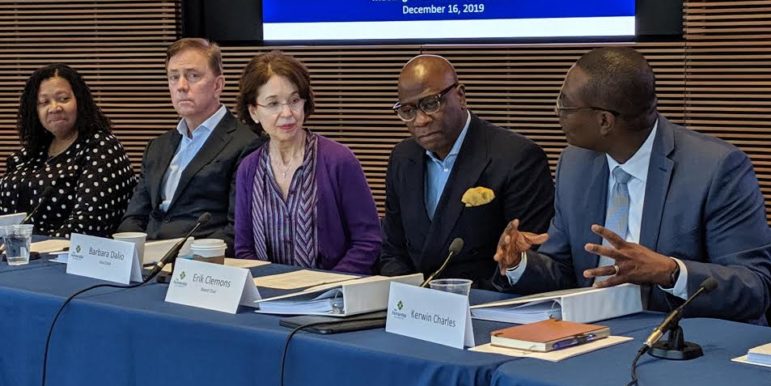 Kerwin K. Charles, a member of the partnership board and dean of Yale School of Management, makes a point. From left are board members, Sheena Graham, Gov. Ned Lamont, Barbara Dalio, and Board Chairman Erik Clemons.

When transparency advocates complained about the Freedom of Information exemption for the Partnership for Connecticut, we were told to wait for smoke before yelling “fire.”

Well, now we have smoke billowing from the kitchen.

The Connecticut Mirror reported last Friday on a proposal for the foundation to pay more than $300,000 for its yet-to-be-named leader.

This raises questions about how the Partnership board will spend $300 million, a figure that will include $100 million in state funding, over the next five years. What other operational costs will it incur?

Ay, there’s the rub — the FOI exemption means the Partnership doesn’t have to tell us. And this sets a precedent for other wealthy residents to follow and potentially exploit.

The Partnership has been conducting its meetings in public, but the exemption allows board members to change that anytime they want. And there’s no requirement that the board report its financials.

The Partnership was created as part of the state budget last spring after the Dalio Foundation pledged to spend $100 million to help support Connecticut’s under-performing schools.

This generosity is welcome. But as part of the deal, Connecticut had to pledge $100 million in taxpayer funds and help generate another $100 million in private donations, bringing the pool to $300 million.

With dollar signs in their eyes, the legislature and Gov. Ned Lamont also agreed to an exemption from the FOI Act for the Partnership — this despite the fact that the Partnership will receive an enormous amount of public funding to perform a public function, with several public office-holders serving on the board.

Now, some of the lawmakers who serve on the Partnership board are raising questions about the proposed $300,000-plus salary for the top staff position.

This also raises concerns about the kind of precedent this sets. Others can look at this a model on how to leverage state funding to affect public policy — while sidestepping accountability to the taxpayers footing the bill.

It’s laudable that Ray and Barbaro Dalio want to help Connecticut’s under-performing schools — we continue to have one of the worst achievement gaps in the nation.

But Connecticut has other problems that could be of interest to wealthy residents. Our transportation system remains inadequate. We have serious gaps in our mental healthcare system.

We need to make sure the Partnership, and any nonprofit that follows this model, maximizes funds to achieve its stated goals. And the public deserves to know how its funds are being used. This includes knowing how much is spent for staff and operations.

What about the applicant pool? Is the Partnership hiring the best person for the job? The public deserves answer to these kinds of questions, too.

Unlike fires, there is no detector that can tell us when it’s time to run and get some transparency. You either have transparency already, or you don’t have it at all. It’s time for lawmakers to restore transparency and make the Partnership for Connecticut comply with FOI laws.

Mike Savino is president of the Connecticut Council on Freedom of Information. He is also a reporter with WFSB.