The needed labor reform no one is talking about 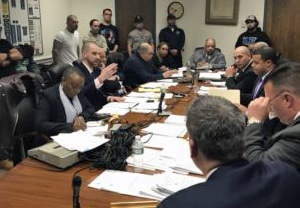 What manager would make a public deal to protect someone who steals, participates in domestic violence, discrimination, sexual harassment, excessive force and a host of other nasty actions that betray the public trust? Precious few. But right now, these backroom deals are crafted every day – on the taxpayer’s dime. And it’s time for it to stop.

If there is any silver lining in the wrenching, highly publicized incidents of abuse perpetrated by a very few police officers, it’s that they present Americans with an opportunity for real labor reform that protects due process, shines light on bad actors, and holds all sides accountable. It is time for us to institute a system that protects due process for the accused, offers full transparency for the public, and ends backroom deals that shield those who have earned no so such protections.

Americans want fair, consistent and equitable discipline for their public servants – not just police officers, but all positions that require a high level of public trust: teachers, firefighters, corrections officers, judicial employees, and social workers. And it’s important to understand that responsibility for securing this outcome rests not just with government unions – who often bear the blame for bad outcomes — but with the governments (the “management”) who too often negotiate bad deals with them.

By law, unions are required to represent the best interests of their members. It is time to emphasize that management has a corresponding responsibility: a fiduciary duty to represent the taxpayers. The high cost of hiring and retaining problematic employees costs the taxpayers millions of dollars each year.

In every public agency, most discipline revolves around the same names. In part, this is because some government employees are hired based on political horse trading, burying unsavory records of poor work history, discharged military misfits, hard drugs and arrests.

When employee discipline or termination becomes necessary for these employees, it is in the taxpayers’ interest to ensure it will hold up to legal scrutiny, rather than resulting in a reversal and costly legal fees. In truth, when an employee escapes appropriate discipline, management is either complicit, incompetent or is placing politics above public safety and the taxpayers.

Too many troubled employees are protected by backroom deals made outside the view of public scrutiny. Even more disturbing is management’s propensity to avoid making the hard decisions by placing employees on prolonged paid administrative leave. This often allows the employee to retire escaping accountability.

State freedom of information laws (FOI) allow employee hearings to occur in executive session. It is in private and before the final determination is made is where the back-door deals are done out of public view. While the final settlement document is a public document by the time it sees the light of day the damage is done and the news cycle has passed.

Common sense reforms could address many of these abuses. They include:

We trust public officials with our children, our lives, our liberty and our property – as Americans, there is nothing more precious to us. It is past time to reform the broken system that governs the way those in positions of public trust are too often hired, disciplined, and terminated. It is time for those in labor and government to do what is right for all of us.

Frank Ricci was the lead plaintiff in the land mark Supreme Court case Ricci v. DeStefano and a union official for 16 years culminating with two terms as President of New Haven Fire Fighters before retiring. Ricci’s opinions are not related and do not reflect those of his employers.