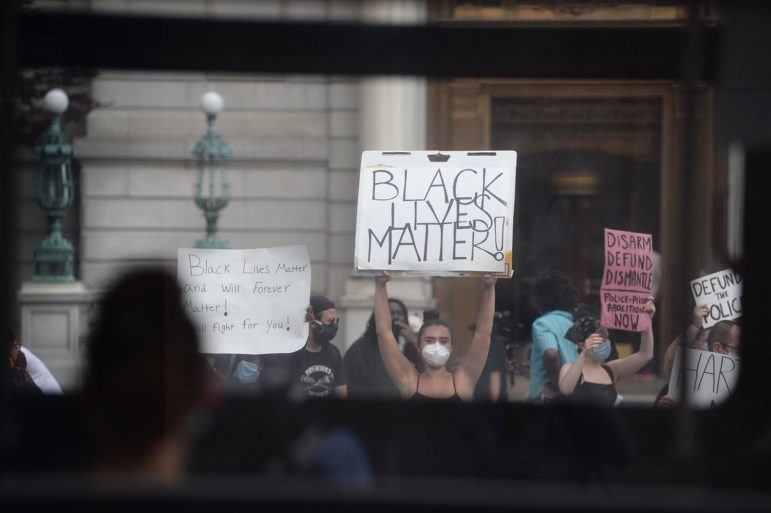 A woman holds a Black Lives Matter sign so passengers on a city bus can see it during a protest demanding the defunding of police in front of Hartford City Hall.

The national, in fact the international, movement stimulated by Black Lives Matter was one of the best run political campaigns of the century.  The slogan bonded many Black citizens, its use of identity politics was a marvel.  So well done, that then candidate Joe Biden said publicly, “If you are black and you do not vote democratic, then you are not black.”

The building blocks of a political strategy is like the legs of a three-legged stool.  First the creation of a theme, then the defining of targeted audiences, and lastly the demonization of your opponent.

The BLM theme emanated from the movement spurred by Malcolm X which advocated power over persuasion, accepted violence as a response to the government overreaching, and a very specific goal of the reformation of policing in the United States under the rubric of “Defund the police.”  They supported their position through the use of selected metrics and anecdotal statements.  Claims were made that we are a racially divided country, with the solution being the election of more Black and brown people to replace the white majorities in Congress.  This was to be accomplished by creating a Black coalition and voting block.  The campaign strategy worked well, the Black community solidified, they achieved their goal  as seen by the massive turnout of Black voters and the election of Joe Biden.  The process of demonizing the other side came through arguments made by Critical Race Theory protagonists who argued that white people had inborn racism, that universal laws should not be applied to all people, rather each cohort deserved its own laws, its own jurisprudence.

Somehow arguments albeit plausible became fact and accepted as the rules of the road.

Much of what was proffered was accepted without the debate, argument, refutation or proof.

In a court each side is allowed an opening statement outlining their position.  Then the trial begins and only those statements that are evidenced are considered in making a decision.

What evidence is there to support such terms and concepts such as:

The toxified term, “White Supremacy,” formerly majority rule, for example?  Although most elected officials are white what evidence is there that they do not act in the best interest of minorities? Furthermore, is there any support for the position that all white people are happy with the white elected officials?

Inherent racism.  As a Catholic I’ve had to deal with the concept of original sin.  Inherent racism seems to make a similar argument to that tenet.  That an entire cohort of people has a built-in bias can in no way be proven.

The use of cohorts as homogenous groups. This belies our individual nature.  Can anyone name a single trait that is universal in any group?

The use of skin color as a personality trait. This has no science to back it up.

Anecdotes are employed to prove racism.  Although a particular instance may support such allegations before you generalize you need to create scope.

Several years ago, Oprah Winfrey on television stated that she went into a clothing store dressed normally and was followed by the store keeper, her contention being that she was followed because she was black.  That was stated factually and as proof of rampant racism.  Yet if you asked Oprah how many thousands of stores she went into previously without being followed, we then could see the size of the so-called racial act.

The use of metrics.  The prevailing method is to use proportionality.  It is reported that a Black man is three times more likely to be incarcerated than a white man, evidence for the charge of racism.

The basis for this statistic is that in Connecticut approximately 24% of the population is black yet 70+ percent of the incarcerated prisoners are black.  At first glance this statistic seems to back up the allegation.  If you were to switch the metric to poverty you would find that the vast majority of criminals who commit violent crimes, not only in Connecticut but across the nation of all races, are predominantly men, who are middle-aged and who come from an impoverished zip code.  If you look at those killed by the police both Black and white, again they come from impoverished zip codes.  If you look at murders in Connecticut they are perpetrated and in the main, foisted upon those living in ghettos.  This is derisively called Black on Black crime.

Educational disparity among races.  Here again the metric used is race.  Using that statistical yardstick we can be made to see that white students outscore black students, giving rise to the conclusion of racial bias in the schools.  Because of racism we therefore need more Black teachers who can relate better to children because of like skin color.  Here again we may find a correlation but there is no evidence that the difference in scores is caused and can be attributed to skin color.  There is though significant evidence that the differences in scores are based on living conditions or socioeconomic class.  Yet we are moving forward with the hiring of teachers of color with no evidence that it will remedy the situation.

The definition of racism is now so broadly defined that any misdeed, “Micro aggression,” is considered as racist.  Using a slur is vulgar and despicable but not racist.

For an action to be racist it must meet either one or both of the following criteria:

If any action does not meet either of those criteria it’s just bad manners.

It appears that we are moving forward politically, socially and economically, based on allegations of racial division that are not yet proven.  In my work and in my neighborhood I’ve encountered acts of racism, sexism and ageism, but few people I’d call racists, sexist and ageists.  Mostly I have lived with people of all colors who have mis-stepped, but found few who I’d call “ists” of any sort.

We must have concern that the political methods that drove the election were those of separation of the races, under the guise of identity politics along with the notion of we being a racially divided nation.  That pitch got votes and may cause laws to be changed.  But will those laws be implemented if the people doing so don’t believe in the underlying premises?

After MLK was killed and Malcolm X took leadership, social change through the unity of the nation became the separation of races, as embodied in Malcolm X’s statement, “There can be no unity of the races until there is first unity of the black race.”

I issue these concerns for your consideration.  First, if we don’t have full disclosure on the prevailing arguments and create a better diagnosis of the problem, we will continue to move toward a society that supports Separate But Equal, not E Pluribus Unum.  Lastly, although many of today’s arguments would be supported if we were to go back to 1950.  They are not supportable today.   Today the need, and where the country is truly divided, is by class.  Those who live in improvised zip codes do not have equal opportunity or equal treatment.  In 2021 the evidence points to the position that “Class is the new “Race.”  That’s where our energies need to be spent in order to create real social change, rather than spending our time in garnering political power for a single race.

Matthew Borrelli lives in the Niantic section of East Lyme.