The Regents have students at heart

The CSCU board is engaged, open-minded and student success oriented 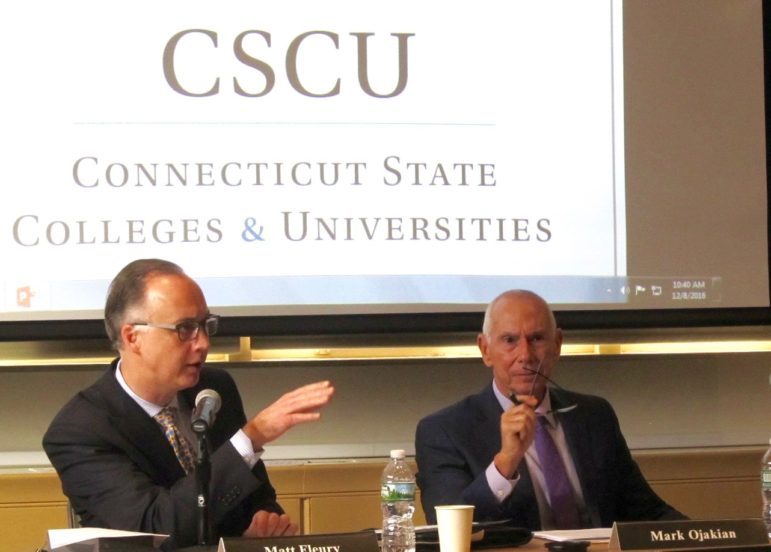 Board of Regents Chairman Matt Fleury and President Mark Ojakian

Recently, there have been editorials commenting on how Connecticut’s state colleges and universities are being run. Oversight for the 12 community colleges and four universities in the state is provided by the Board of Regents. This is a group of dedicated volunteers who were selected by the governor and leaders of the legislature. While we may not all agree on every detail of how our colleges and universities are managed, the accusations made against the board are both misguided and in my experience, simply not correct.  The existing Board of Regents, along with President Mark Ojakian and his staff, are fully engaged and open minded in terms of finding solutions to the challenges we are facing.

The Faculty Advisory Committee (FAC) is a group of faculty that provides input to the Board of Regents and the legislature.  I was elected through a state-wide election to represent the four largest community colleges on this committee for the past six years.

During this time, the FAC has met with President Ojakian and members of his staff numerous times to discuss challenges that the state’s colleges and universities are facing.  By comparison, members of the legislature have not had the time to meet with us.  We have been unable to arrange a meeting with either of the co-chairs of the legislature’s higher education committee. They have been just too busy.

It has been proposed that the state legislature have an increased role in how the colleges and universities are managed.  It is doubtful that they could devote the same degree of attention to the colleges that current administration does.  For example, just in the last six months, Regents Naomi Cohen,  Aviva Budd, and Ojakian have all spent hours in Naugatuck Valley Community College classrooms talking with students about the challenges they face.  No doubt other regents and members of President Ojakian’s staff are doing the same across the state.

The community colleges are in the process of a consolidation plan called “Students First.”  Most students are probably not all that interested in how our system is managed.  They come to us to make their lives better.  Some faculty have expressed opposition to the “Students First” plan. Some have supported it.  Probably the greatest number of faculty are not that concerned as to whether there is a campus president or a regional president. They just want to do the best job that they can teaching students.

Claims have been made that faculty opposing the “Students First” consolidation plan for the community colleges have received retribution for their viewpoint.  As chair of the FAC, I have heard more reports of faculty having their careers negatively impacted by supporting “Students First” than those being penalized for opposing it.

The Board of Regents is managing the college system with the success of students as their highest priority. There are many other competing interests that could be considered, but they have stayed true to their stated priority. Does this mean that I agree with every action that the Board of Regents has taken?  No, but I am quite comfortable working with a team that is trying to help students.  That is why I became a teacher.

Del Cummings is chair of the CSCU Faculty Advisory Committee. He has taught at Naugatuck Valley Community College for 29 years.  Prior to this, he held engineering and management positions with Pfizer and ATMI.

2 thoughts on “The Regents have students at heart”