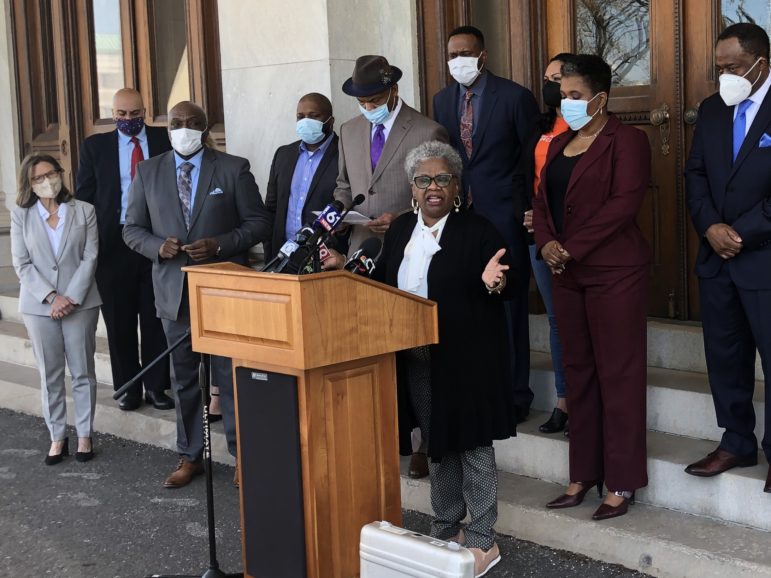 Sen. Marilyn Moore, D-Bridgeport, organized a news conference in mid-April following the shooting death of a three-year old in Hartford. On Friday, she convened a joint informational committee hearing to hear about gun violence intervention and prevention.

On a recent Saturday in Hartford, 3-year-old Randell Jones was shot and killed while sitting in a car with his siblings. Later that afternoon, just a mile away, 16-year-old Ja’Mari Preston was shot dead. These are not isolated events. Over the 10-year period ending in 2017, more than 400 young people in Connecticut have been killed by guns. The crisis of gun violence disproportionately affects communities of color. One statistic screams out: young Black men in Connecticut are 39 times more likely than young white men to be slain with a gun.

The ramifications of gun violence extend far beyond the victims, and far into the future. Childhood exposure to gun violence —the reality of many Black and brown children growing up in Connecticut’s urban centers— has short-term and lifelong consequences. Just consider the impact on Randell’s 4- and 5-year-old siblings, who witnessed their brother’s murder from inches away.

As State Sens. Marilyn Moore, Doug McCrory, Gary Winfield and Patricia Billie Miller demanded in an emotional and very personal way at a press conference at the State Capitol, the time is long past for Connecticut to invest in the perennially under-resourced communities they represent. To eradicate the root causes of violence —despair and lack of opportunity— resources need to be put into education, job training, affordable housing and healthcare. “As a Black person, we have learned how to survive in this country,” Sen. McCrory remarked. “We’re not interested in survival anymore. We want to thrive.”

In parallel to investing in opportunity, there is an urgent need to put more resources into community-based gun violence prevention efforts. We can’t afford to wait until systemic change takes hold to solve the problem of interpersonal violence. With gun homicides up 50 percent last year, we need an intervention now. That is the objective of the Connecticut Initiative to Prevent Community Gun Violence, an effort proposed by CT Against Gun Violence in partnership with a broad, and growing, coalition of organizations that address the needs of marginalized communities and advocate for social justice, racial equity and gun violence prevention.

The CT Initiative seeks to establish a state-level Office of Community Gun Violence Prevention, tasked with funding and implementing evidence-based, community-centric, programs and strategies to reduce street-level gun violence in Connecticut’s larger urban centers. Dedicated staff resources with multi-disciplinary expertise would bring the focus and attention needed to address and coordinate a response to Connecticut’s community violence problem. It would be responsible for securing federal, state and private dollars to provide stable grant funding to supported programs. An advisory council composed of community leaders, survivors of gun violence, executive branch agencies, state and local elected officials, public health experts, law enforcement and gun violence prevention advocates would provide guidance, ensure accountability and guarantee that voices of the community are part of the oversight.

With President Biden’s discretionary 2022 funding request to Congress that includes $200 million for a new Community Violence Initiative, the need for the CT Initiative is more important than ever. A briefing paper from the White House on the administration’s investment details 26 funding sources across five federal agencies. The state needs to be in a position to advocate for its fair share of the funds, and to have the capacity to direct the funds to where they are needed most. This can’t be done by an approach that is limited in scope and reactive in nature, as has been the case in Connecticut.

We welcome the news just announced by Gov. Lamont that proposes spending an additional $3 million over the next two years on community gun violence prevention programs, funded by the Biden administration’s American Rescue Plan passed by Congress earlier this year. This is a good foundation on which to build towards the vision of the CT Initiative.

For too long, the state has mostly used a one-size-fits all strategy to address street violence: policing-led models such as focused deterrence. While law enforcement has a critical role in gun violence prevention through community-policing strategies and enforcement of our state’s strong gun laws, Connecticut needs to invest in a comprehensive portfolio of solutions that go beyond policing; addressing police accountability alone is not sufficient.

Community-based organizations such as Compass Youth Collaborative and Hartford Communities that Care in Hartford, the Connecticut Violence Intervention Program in New Haven and RYASAP and StreetSafe in Bridgeport are already doing the dangerous, on-the-ground work. Programs like these need to be better funded, and we need more evidence-based programs, working collaboratively, in more of our urban centers across Connecticut.

President Biden’s American Jobs Plan commitment to allocate $5.3 billion over eight years to community-based violence prevention programs represents a huge opportunity for Connecticut, but we must be ready to invest state resources as well. The good news is that other than appropriating funding, legislative action isn’t required to make the CT Initiative a reality. Whether housed in the Office of Policy Management (which oversees Project Longevity, the group violence intervention program) or the Department of Public Health (DPH), Governor Lamont can put dedicated staffing in place by executive action.

In fact, established nearly 30 years ago by statute, the DPH Office of Injury Prevention has the mandate to do what is envisioned by the CT Initiative. Its purpose is to coordinate relationships among state agencies and community organizations, and develop funding sources, to “establish programs promoting injury prevention to reduce…interpersonal violence, including homicide.”

Connecticut has the resources to go beyond the $3 million earmarked from the American Rescue Plan. The Office of Fiscal Analysis reported that state finances are projected to close the fiscal year on June 30 with a $245 million surplus. It’s estimated that the direct annual cost of gun violence to Connecticut taxpayers is at least $90 million. By investing a fraction of that cost in community violence prevention, as proposed by the CT Initiative, we’ll be able to save lives and free up resources for further addressing the root causes of community violence.

Connecticut has long been a leader for gun violence prevention. It needs to show leadership now, more than ever, to reduce gun violence that victimizes and destroys the lives of Black and brown people and the communities in which they live. States like California, Maryland, Massachusetts, New York, and New Jersey have all made a commitment to invest in community violence intervention strategies. Connecticut needs to make the same ongoing commitment to protecting the lives of its citizens.

There are life-saving solutions to be found in violence intervention and prevention programs operating at the local level. The state should invest in the organizational infrastructure to find, fund and follow these programs. Working towards the full vision of the Connecticut Initiative to Prevent Community Gun Violence should be a priority for legislators and the governor; CAGV looks forward to continuing the discussions that are underway.

Jeremy Stein is Executive Director of CT Against Gun Violence.