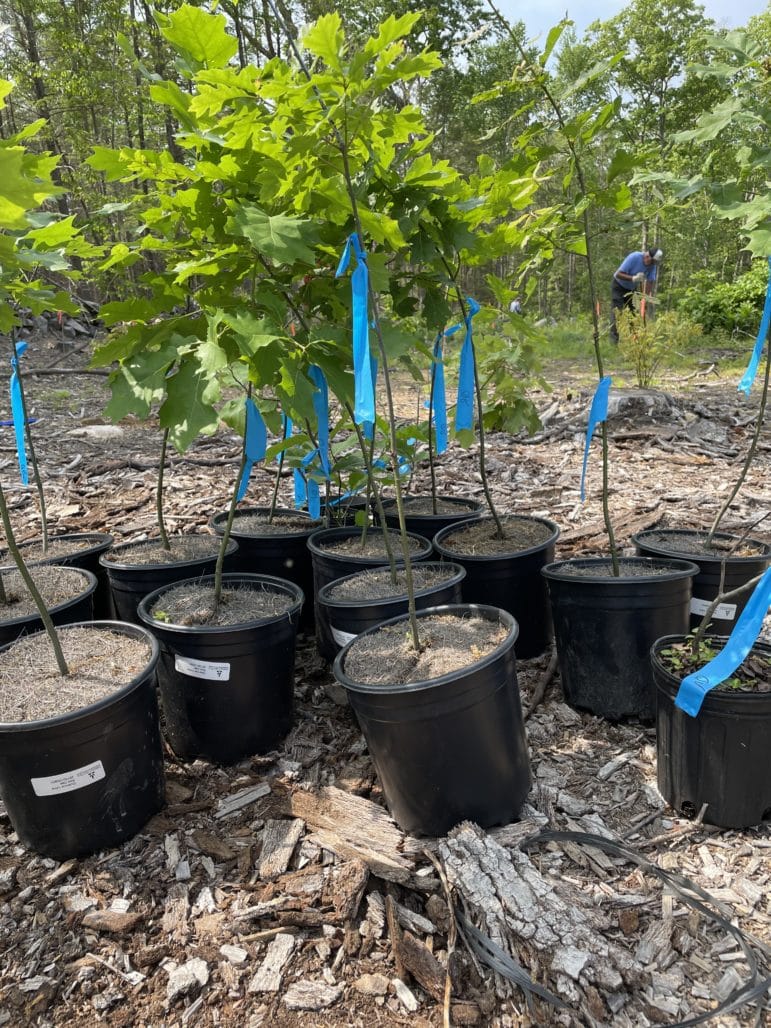 Oak trees that were cultivated in Maryland will be planted as part of a demonstration project in the Hoffman Preserve. It is hoped because they are already used to warmer weather that they will be more resilient in the face of climate change in Connecticut.

We’re in a new era of climate accounting, and the rules are being made up as we go. Nations pledge to reach certain benchmarks by certain dates in the more or less distant future, but the accounting isn’t as simple as measuring increases and reductions in emissions. Nations and especially corporations would rather talk about “net” emissions, as if in addition to regular smokestacks and tailpipes they also have a different sort, that suck CO2 out of the air and turn it into brown sugar or something.

John Kerry, our climate ambassador, sometimes sounds like he’s on that plan. He recently predicted that in the future, fully 50 percent of American non-emissions, or perhaps reverse emissions, will come from yet-to-be-deployed technology. This is an amazing feat of futurism: the man literally doesn’t know what he’s talking about– what technologies, deployed by who, when?– but he knows what proportion of his work he can rely on them to accomplish. Slick!

Truthfully, the science-will-save-us thing has worn a little thin. The hot trend in climate-netting is back-to-nature- specifically, planting trees. The stakes are the future of earth as a livable planet, so let’s game this out for real, shall we?

If the strategy is to become “carbon neutral” by some future date, no action is required. All you need is a plan that involves paying someone somewhere to plant trees at some point. Spitball some numbers in the conference room, and your environmental “plan” can be done in an afternoon! Naturally, carbon-balance-in-the-future is popular with outfits that, in the meantime, emit the carbon and make the money.

But let’s say your plan is for now. You’re causing trees to be planted, and you want carbon credit for the way these trees will offset your current and future emissions.

1)  The trees must be planted on land owned outright by the entity claiming the credit. Trees mature over decades, and they do their best carbon-sucking work when they have got to be pretty big. If you don’t own the land they’re growing on, you aren’t actually in a position to guarantee that they ever will. Whatever business arrangement you have made with the actual landowner will last until a better offer comes along. These are not the terms on which we save the world.

2) Your outright ownership of this land must not be unencumbered. If you’re claiming credit now, you must be legally disabled from changing your mind in the future and selling the property or cutting down the trees. The period of time for which you are required to hold up your end of the deal should be the period of time for which your current and future emissions are going to continue to heat the earth. So, many hundreds  of years, if not thousands.

3) The property in question must be land on which trees would not have otherwise grown. There are lots of trees in the world; they grow naturally, and nobody deserves credit for them (except God, I guess). If you want credit for “your” trees, show us that but for your investment, the acreage in question would have been treeless.

Now things get really tough. There are two sorts of places where trees don’t grow– and where, therefore, you could make them grow and rightfully take credit for it. One is developed areas, cities and towns, where the roads and buildings, the parking lots and playing fields and lawns don’t leave much space for trees.

But this is the sort of real estate everybody wants. It’s expensive! Needless to say, no entity of any kind is pursuing this strategy.

The other places trees don’t already grow are places where they don’t want to grow. There are oceans, deserts, tundra, our few remaining glaciers– so have at it! Buy half of the Sudan, say, and truck in a billion tons of topsoil, and irrigate the whole thing in perpetuity. In a carbon-neutral way, of course, with solar-powered dump trucks and desalinization plants. Those will surely show up along with the reverse smoke-stacks. Oops! So much for stipulating that you’re doing this now, not in the future….

The only physically real way to combat global warming (which is a physical thing) is to reduce current emissions. There are ways to do that; we know what they are. We know who doesn’t want to reduce emissions currently, and why. It won’t happen until we force it, which will be politically difficult. “Carbon offsets” are something to talk about instead. There is always something else to talk about, instead of doing the difficult thing.

There’s another sort of environmental accounting which is not as gauzy as the future-trees make-a-wish carbon offset, and that is the measurement of our continuing subsidy of the fossil fuels industry. There are different takes on it; conservatively, we American taxpayers gift this sector some $20 billion annually.