The U.S. has become a war capitalist state 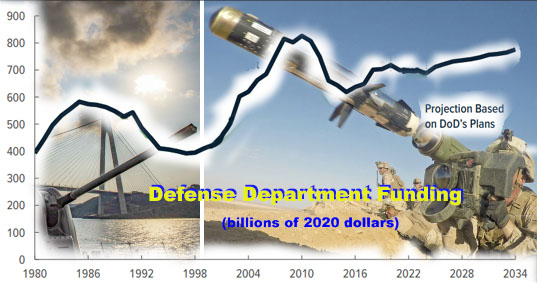 In “Rebuilding America’s Defenses:  A Report of the Project for the New American Century,”  the objective for the American military in the Cold War was:  “Contain the Soviet Union.”  For the 21st Century:  “Preserve Pax Americana,” or, the American Empire.

Thus following the collapse of the Soviet Union, the Neocons’ militarist agenda has helped to transform America into a War Capitalist State.  Fifty-three cents of every dollar of discretionary spending goes to war and related.

This nation, with a GNP of about $22 trillion is saddled with about $28 trillion in red ink.  Some 20 years ago, black ink exceeded red ink about two-to-one.  But with the Bush, Obama and Trump administrations, red ink has soared as war spending, together with undeserved tax breaks for America’s royalty and accompanying forms of national looting has progressed without respite.  Corporate socialism based on the moniker, “Making Society Work for the Few,” is succeeding beyond the wildest dreams of America’s tinseled aristocrats.  Readers should turn the pages of Frederic Clemson Howe’s 1906 literary effort, Confessions of a Monopolist.  You want to be really rich in this country, make government a business and create your own welfare system by draining the wallets of the common herd.

War is big business, despite the fact America has not fought a favorable clear-cut decision in a protracted conflict in decades, underscoring the assessment of a retired colonel I used to work with at the military magazine in which I do historical research.  A retired attack helicopter pilot who had faced off with Iraqi-crewed, Soviet-built T-72 tanks during Operation:  DESERT STORM, and who stated quite unequivocally, “Today’s wars waged by America have absolutely nothing to do with patriotism, and everything to do with national interest.”  That is seconded by none other than George Washington, who stated in his farewell address 225 years ago, “Over-bloated militaries are inauspicious to liberty.”

Evolving addiction to military spending is revealed with the 1990 Chief Financial Officers Act, signed off on by President George H.W. Bush, which made the bill law.  Every CFO of every major branch of the federal government was supposed to do an audit and turn same into Congress, since according to the Constitution, Congress has power of the purse.  The Pentagon never did the audit, until 2018.  Result:  The Department of Defense could not properly account for the spending of, since 1998, $21 trillion. Yet every year they still get more.  Which begs the question:  Who controls the purse?  Elected or unelected officials?

The Move the Money Campaign as espoused by the United States Peace Council, is an effort to wean this nation from war, and to put money back into the economy.  For imperialism is the endgame of American capitalism.  For all great powers come to an end . . . to which America will be no different.  Even now it is a dying ember . . . as long as the present progression grips the nation.  And the history is there:  Athenian Democracy; Roman Republic; Ottoman Empire; Spain, the British Empire; Imperial France; the Soviet Union . . . addiction to military spending and empire eventually brings about downfall.

America’s shameful lack of adhering to the precepts of the Constitution has given rise to the war capitalist state.  The founders of this nation understood the meaning of large standing and or professional armies and what they ultimately become . . . ravenous consumers with unquenchable appetites for the fruits of the people’s labors.  History says this is so.  Or as Adolf Hitler observed, Armies do not exist for peace; they exist solely for triumphant exertion in war. . .