There are better budget options than raising taxes and cutting services for poor, middle class

The governor’s proposed state budget asks more from those who can least afford it, gives a tax break to a few of the state’s wealthiest residents and fails to offer solutions to address the state’s eroding revenue sources.

Of the new revenue in the governor’s budget, 40 percent is generated by eliminating the property tax credit and cutting the State Earned Income Tax Credit. 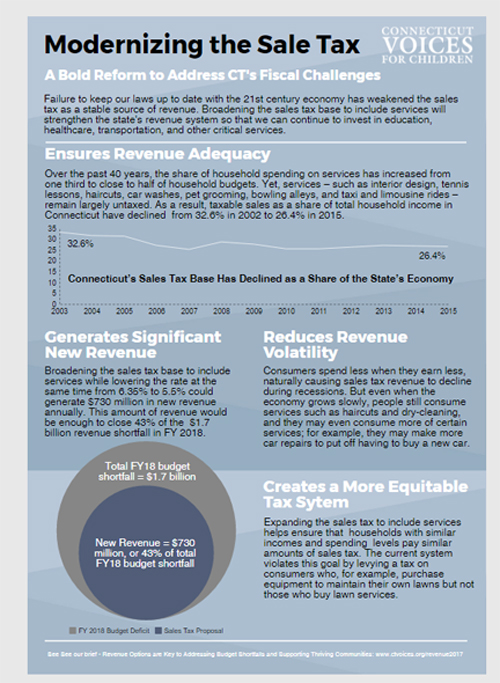 The state EITC, which reaches about 200,000 low- and moderate-income households, builds on one of the most powerful tools for helping working families make ends meet. When layered on top of the federal credit, the Connecticut EITC boosts about 6,600 people over the poverty line (about $23,990 for a family of three) and eases poverty for another 99,000. The state property tax credit was fashioned to offset the unfairness of the property tax for some 800,000 low- to moderate-income residents.

As if tax increases weren’t enough, low- and moderate-income families would also suffer from cuts to critical services.

For example, cuts to child-care subsidies, known as Care 4 Kids, will exacerbate educational inequities and create barriers to employment for parents who can’t afford the prohibitive costs of child care.

Cuts to essential school-based wraparound services, such as school health centers and family resource centers, will worsen child health, lead to a decreased use of key early interventions and will lead to lower academic achievement statewide.

Cuts to the Governor’s Scholarship program could mean fewer high-achieving low-income students would be able to afford public university in Connecticut. Finally, cuts to HUSKY A, which provides health insurance for children, low-income parents and pregnant women, would push as many as 9,500 low-income working parents out of the program — in some cases the very same parents at risk of losing their child-care subsidies.

Each of the proposals listed above – both tax increases and program cuts – build upon prior reductions.

At the same time, the budget proposal includes a tax break of $100,000, on average, for some 600 taxpayers through changes to the estate tax. The rationale for this proposal is that the estate tax drives wealthy individuals out of the state. That is a myth. Numerous national studies, including Connecticut-specific data presented to the State Tax Panel, find no evidence of tax related flight.

At Connecticut Voices for Children, we have proposed a menu of revenue options that meet needs while also laying the foundation for future opportunities.

We recommend, for example, changes to the sales and use tax to better capture the spending patterns of our 21st century economy. Households today spend more on services and online sales than in the past. Services in our state, however, are often tax-exempt, in part because they have been deemed difficult to collect.

And while taxes are legally due on online purchases, retailers are not always required to collect them. As a result, our sales tax revenue has decreased from nearly a third of total general fund revenue in 2001 to a quarter in 2015.

Broadening the sales tax base to include services would reduce volatility, create a fairer tax system and generate $1.5 billion in new revenue without changing the tax rate. We could even reduce the current rate by one percentage point to 5.5 percent and still generate $730 million in new revenue.

A common-sense approach to the state’s challenges is one that includes new revenue in addition to strategic spending cuts that does not ask low- to moderate-income residents to disproportionately shoulder the responsibility of our collective challenges and that supports the state’s long-term economic health.

To meet that challenge and to lay the foundation for shared prosperity across the state, we must think and act more boldly, more strategically and more equitably. That course of action is made possible by a more stable and more modern revenue system.