Time for Connecticut to take the lead in voting reforms 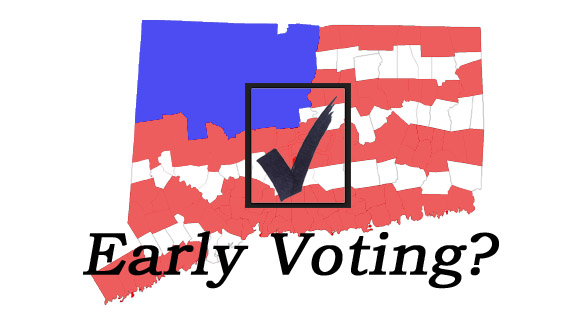 Recently, my 18-year-old daughter took the important first step to engage in our democracy and enthusiastically register to vote.  While she did this as soon as she could, many young people do not register when they are eligible, creating long-term implications for our government and society.

To change this, I believe Connecticut has a unique opportunity to update our laws this legislative session and put our state on the forefront voter engagement and participation.

I’m calling for our state legislature and the governor to enact a three-part plant in the areas of voter registration, early voting and state positioning and improve our citizens participation in the democratic process.

First, we should pass “opt-out” automatic voter registration (AVR) right away.  Currently 16 states and the District of Columbia have approved this policy, meaning over one third of Americans now live in a jurisdiction that has either passed or implemented “opt-out” AVR.

I fully support and back the efforts of Secretary of the State Denise Merrill and leaders of the state legislature’s Government Administration and Elections Committee to update our statutes and improve our currently voter registration processes in this area this session.

Since Connecticut’s original DMV voter registration program started in 2016, more than 400,000 new Connecticut voters have used the DMV to register, and more than 550,000 voters have made changes to their registrations.  Thanks to Gov. Lamont and the leadership at the Connecticut DMV, who are making our DMV registration processes more customer friendly, automated and streamlined, we could quickly integrate an “opt-out” AVR system into their system and benefit from their technological successes.

Massachusetts passed AVR in 2018 and it went into effect this January 1.  It’s time for us follow their lead and make it easier for people to register.

Second, we need to enable and allow early voting processes to become law in Connecticut.

Let’s pass Senate Joint Resolution No. 15 “A RESOLUTION PROPOSING AN AMENDMENT TO THE STATE CONSTITUTION TO PERMIT EARLY VOTING,” currently in the Government Administration and Elections Committee, as soon as possible.

Currently 39 states and the District of Columbia allow for early voting.  Two more states will provide this option in the coming years.  What are we waiting for in Connecticut? We need to make it easier for our citizens to exercise their right to vote and we can accomplish this by quickly passing SJR No. 15 this session.  We are behind the times, and we should enact this commonsense reform to allow more opportunity to vote.

Currently, our presidential primary is held on April 28, missing much attention from the candidates and the nation.  This year, most of the original candidates will have been eliminated by the time our contest comes up.  If we make Connecticut the first-in-the-nation on the calendar, we will have more impact in picking the president and bring significant economic benefit to our state.

A recent study investigated this question by using a Census Bureau statistical tool called “nearest neighbor analysis” and targeted a broad cross-section of 28 different variables.  They found that Illinois and Connecticut are the two state’s most like the U.S, with both having similar proportions of whites, blacks, and Hispanics compared to the nation at large and also demographically similar in terms of median age, median household income, education levels, manufacturing jobs, its share of renters and typical home values.

Unlike Illinois, Connecticut is smaller and manageable enough, both in terms of population and geographic area, to allow for the emphasis on retail campaigning that’s such a big part of the Iowa and New Hampshire traditions.

When you add up all the data across all categories, they found that Connecticut is the most accurate and most representative of our nation, with a high level of demographic averageness to the nation and U.S. as a whole, making us the logical choice to be the first-in-the-nation in 2024 and going forward!

We are in a hyper-focused time of attention and focus on politics and government.  Connecticut should take the lead and pass these three important common-sense reforms this legislative session and put Connecticut on the forefront of our Democracy.