Tips to stave off armageddon (if you are a billionaire) 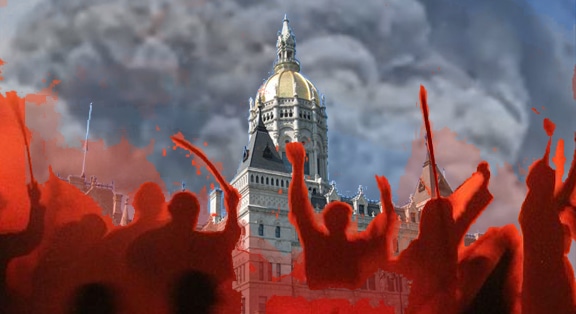 Recently, some smart observers of our economy have realized that our system is broken. These voices point out that the gap between rich and poor has grown too wide, and most people have not seen real income growth in decades. They denounce that the economy is rigged against working families. They point out that our education and health system are grossly unfair, driving growing unrest. The tax system and the prison system drive growing inequality, with political deadlock only making it worse.

The observers worry that all these factors, combined, present an “existential risk” to the U.S. and the rest of the world. Some of these observers happen to be billionaires, like Ray Dalio, the wealthiest man in Connecticut.

I do not say this all that often, but I happen to agree with Mr. Dalio. The U.S. economy is broken, as well as many of our governance systems alongside it. Although topline numbers like GDP growth, unemployment, or inflation look healthy, the vast majority of working families in America struggle to make ends meet. Some of the basic elements that define a middle-class life have become increasingly out of reach. Housing prices, health care costs, education, childcare have been steadily rising much faster than wages, squeezing workers and families, while good jobs become more and more scarce.

When faced with such a vast array of dangers and threats to democracy, a man with the vast resources of Ray Dalio might be tempted to try to fix it himself. This is the road that some of Mr. Dalio’s peers have taken, choosing to run for President. We can call it the illustrated plutocrat approach to governance: throwing a billion dollars or two to convince enough Americans you alone can fix this mess, and hoping the country trusts you enough to get you to the Oval Office.

This might be a tempting solution, but it is unlikely to get much accomplished. As powerful as the President of the United States is, he or she cannot get much accomplished without a solid majority in Congress. Deadlock and dysfunction do not go away by electing a different Commander in Chief; it just moves our inability to address these problems somewhere else. If our problems are truly systemic (and they are), changing leaders is not enough. We need reformers in the legislature, as well.

Things go beyond congressional deadlock, however. A hypothetical wise billionaire president, even paired with an active, organized Congress, will still only be able to go so far to fix many of our issues. Take Connecticut, the third most unequal state in the nation. Most of the sources of our glaring inequities in education, housing, or access to opportunity come from policies that are set and defined at the state and local level, from education funding to zoning, taxation, or job market regulations. No matter how great our president is, he or she won’t be able to do much to reduce Connecticut’s racial and income segregation.

Fortunately, Mr. Dalio has been wise enough not to embark on a presidential vanity project of uncertain returns. Instead, he has made a substantial investment in education in Connecticut, rightly identifying one of the areas where our state badly lags. Although we have been critical of how the state will manage and administer the money, the funding will likely do some good to many students in our state.

There is, however, a better path.

First, anyone that intends to fix our politics and its consequences must start by listening carefully to the people that bear the brunt of injustice. Those who suffer the most should be the ones closest to power. You can learn much of what is wrong with this country and what reforms we need by bringing these voices to the table. Top-bottom reforms, more often than not, fail. To change things, we need everyone at the table.

Second, to change the world you need to support organizations that want to change the world. If this is a systemic crisis that puts our freedoms and prosperity at risk (and it is) it is imperative to support the people and voices that care and want to build the kind of multiracial, broad, coalitions that you need to bring real change. Fixing our malaise goes beyond just winning a Presidential or Gubernatorial election. It requires building the infrastructure to organize a new political majority. Only then we will see the real reforms that our political system requires to face the challenge at hand.

Now, I have to say that this is the consciousness-raising work that the Working Families organization has engaged in for the past two decades. We are not the only ones in this work, but we have been uniquely effective in supporting those who are willing to bring structural change. Others have mobilized effectively to raise and engage voters and elected officials to address climate change, health care access, immigrant rights, housing, or education. The best among them share a clear commitment to long-term reforms and coalition building, not just replacing those at the top.”

Our country, our planet, is a dangerous place. I believe that with smart investments we can build the political power we need to bring it back from the brink.