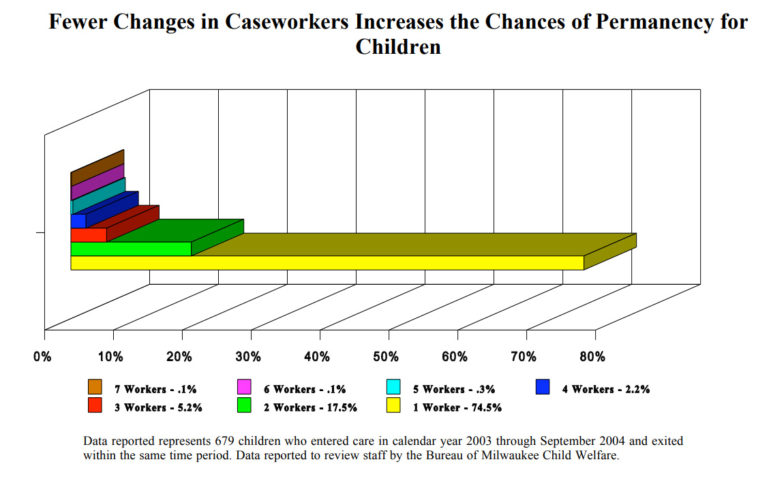 As we recognize National Adoption Month this November, we need to evaluate how we can do better for Connecticut children in state care.

Children should not be required to spend one day longer than necessary questioning where they will live or which relationships will remain secure. The Connecticut Department of Children and Families (DCF) has, in its power, achievable steps to make that happen.

The first, and arguably the most critical step, is avoiding social worker turnover. Changing social workers significantly impedes a child’s chance of timely permanency — defined as reunification with biological parents or adoption through kinship or pre-adoptive homes – according to the Flower, McDonald and Sumski, study in 2005.

The facts speak clearly: changing social workers during the first year in care has the power to drastically delay finding a child’s permanent home and all possible mental health implications of uncertainty, stress, and trauma continue to be exacerbated.

“In a child’s most impressionable years, being repeatedly shifted from home to home creates a mindset of not having a place and not being wanted,” said Ryan Biggs, Naval Reserve Officer and Wethersfield Town Councilman “This sense of neglect may cause a lifelong effect on our youth which correlates to the general performance of this child in school, relationships and adulthood. I know because I was that child.”

What if that was your child experiencing the delay? Would you be comfortable with the additional time spent in DCF offices?  Would you tolerate changes in social workers when the history of the case loses detail with each handoff? With each passing day their identity detaches a little less from “child” and attaches a little more to “foster child?”

Social worker turnover has been a major obstacle in Connecticut for decades. Back in 1989, the case of Juan F. was presented to the courts challenging the way children were served in Connecticut state care. As a result, in 2004 an exit plan was put into place with 22 benchmarks that DCF had to abide which was overseen by a court monitor as noted by Connecticut Voices for Children.

DCF remains under the consent decree, nearly 20 years after its initiation.

In terms of permanency, the benchmark associated with the Juan F. decree is that 40.5% of children achieve it within their first 12 months in care. The most recent available data, from 2019, shows a rate of 27.7%, which is well below the benchmark (Children and Family Services Plan Final Report). It is highly unlikely that this number improved through the pandemic. According to research done by the Administration of Children and Families Office of Planning, the longer the duration in foster care, the more likely children will age out of the system instead of being placed in a permanent home in as per a study reviewed by Claire Chiamulara for the American Bar Association.

With the strong correlation between social worker turnover and delayed permanency, why is DCF not turning its attention to reducing the number of social workers on each case?

Many foster parents shared the experience that social workers are switched without warning or explanation. One parent shared that they fostered a child who had been in care more than three years (nearly half of the child’s life) with no resolution. During the first two years in care the child had three different social workers and four changes of supervision providing guidance to and making decision about the direction of the child’s case plan.

Better reporting of this information will allow for a clearer understanding of its impact on delayed permanency in Connecticut. Likely, this will shed light on the breadth of the issue. It is very possible that delays in permanency have much less to do with organic issues related to case development than consistency in workers to move the case along to permanency; and permanency is exactly what our children need.

Jennifer Fell is the Founder and President of Fostering The Community, Inc., a nonprofit working to educate residents in Connecticut about foster care and improve systems; Fell is currently the foster parent of two children through DCF. Kelsie Canessa is studying for her MSW in Social Work at University of St. Joseph’s University; she works at the Village for Families and Children as a Child Development Specialist.

Classroom inclusivity is a vital element of Connecticut education

It never occurred to me that school segregation continued to be a problem in Connecticut, much less my own town.