I would like to stay calm but I can’t. I can stay silent, but I must not.

In light of the predicted devastation that Hurricane Florence may bring to the Carolinas, President Donald Trump’s fingers have once again taken a life of their own on Twitter.  He has attempted to create an alternative reality.  People who do not know the facts about Hurricane María and Puerto Rico may be ready to accept them.

To state that Puerto Rico lost only six to 18 people to the hurricane is a falsification and a fantasy that should make irate and raise questions even among the most common folk devoid of any knowledge of Puerto Rico: the oldest colony on earth.  He also has launched a cowardly attack on Carmen Yulín Cruz, the mayor of San Juan. She is not my favorite politician in the island by any means. That said, she has passion, commitment and guts.  She has stood for the truth and the well-being of all Puerto Ricans. 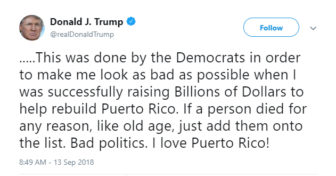 Those of us who were engaged in relief efforts after María know the real human toll.  I witnessed the state of many people who arrived in the relief flight that took my mother and my family out. I bet many of them are not alive today.  As one the coordinators of the Airbridge program at Central Connecticut State University, I received one student that lost both of her grandparents to the hurricane.  Several family friends in my hometown of San Sebastián Puerto Rico had deaths directly and indirectly related to María. I still grieve for them.

The government of Puerto Rico was not in the best position to face María. Years of abandonment and lack of care for the infra-structure left Puerto Ricans vulnerable to almost any natural phenomenon. María, a category 5 hurricane, demolished an already fragile power system, roads, airports and ports. It brought chaos into the lives of everyone.  Dr. Ricardo Rosselló,  a smart but inexperienced governor, put his trust into the American government. He hoped they were going to throw a lifeline his way. They did not.  As a result the island is drowning to this day. It is called colonialism.

The feeble response Puerto Ricans received from the “motherland” have led many to question the relationship between Puerto Rico and the United States.  It also has led them to a unique time of introspection that has allowed to ask a simple and fundamental question:  how many people died?

During the initial aftermath, the government issued vague and inaccurate reports of the death toll. The government reported just 67 deaths. Later on, they raised the estimates to 1,467 casualties.  When faced with many discrepancies, Dr. Rosselló stated that anyone fudging statistics will have their heads “roll.”  Eventually, they commissioned an independent study from George Washington University . They have now issued their findings and set the death toll at 2,975. Many still think this a gross underestimate.  Funeral directors did run out of caskets and embalming fluid…

Today Trump stated that only between six  and 18 people died. He must have 2,960 “lost” souls forever biting his back.  At least, I hope they do.  We all know that our president leans towards the low. Trump may have been able to fix the damage of Stormy Daniels with money. We cannot bring back the dead that way.  How much lower can he get? Have we reached the bottom yet?

Puerto Ricans happen to be citizens of the United States. We are one of the largest ethnic groups in the Northeast.  We have a culture of compassion.  Our hearts care for all. Why is he doing this to us?  What does he have to win or to lose?  Why has he targeted the major of San Juan? She has done her best by giving a voice to the victims and disenfranchised.

Mr. President, you are a poor example of a human being. You do not represent me nor do I have any respect for you.  No real logic can back up your arguments. May you find a path out of hate and go away into the night. You have injured my soul and those of millions of us.

Alive Puerto Ricans we are and we intend to stay and be.

Serafín Méndez-Mendez is a Professor of Communication at Central Connecticut State University and involved in many community initiatives in Hartford.

CTViewpoints welcomes rebuttal or opposing views to this and all its commentaries. Read our guidelines and submit your commentary here